In early 2009, a new institution washed ashore in the Reykjavík harbour, a little lifeboat providing some refuge from Iceland’s economic shipwreck. It’s called Hugmyndahúsið (‘The House of Ideas’), and was established to give rise to 50 companies that would in turn create 500 new jobs over a period of two years. It’s an idea that grew out of an unlikely alliance between two universities in Reykjavík; the fine arts oriented Iceland Academy of Arts and business-minded Reykjavík University.
Hugmyndahúsið is ostensibly open to everyone—including foreigners— and getting involved is practically free. Too good to be true? The Grapevine recently toured the somewhat hidden House of Ideas with project manager, Daníel Björnsson, who helped shed some light on its foundations.
FROM BUZZWORDS TO BASICS
According to Daníel, another way of describing Hugmyndahúsið is an “open innovation centre.” I ask him to describe the ideological objectives of such a centre and he says: “to connect people.” Yet, Daníel shies away from the term networking and underlines the spontaneous rather than calculated possibilities that such an open space provides. “This environment works better with creative people,” he says, “like creative industries—another buzz word—but it’s true, when you have this kind of rough space, creative people seem to be drawn to it because you can create your own space out of it.” Although it is safe to say that Hugmyndahúsið was conceived in the wake of the 2008 economic crash in order to create jobs and boost morale, Daníel hesitates to call the institution a force for social change, “It’s more of a result of social change. We haven’t been pushing anything in any particular direction.”
In material terms, Hugmyndahúsið oversees two large warehouse-type spaces on Grandagarður. In addition to the cubicle room that houses a rotating set of about a dozen various upstart companies and projects, the main building houses a café and several pockets of seemingly empty space. “We provide chairs, a fridge and internet, but basically what you see is what you get.” The key is providing space: “You have the opportunity because you have the space to work your ideas out.”
FROM KNITTING PARTIES TO POLITICS 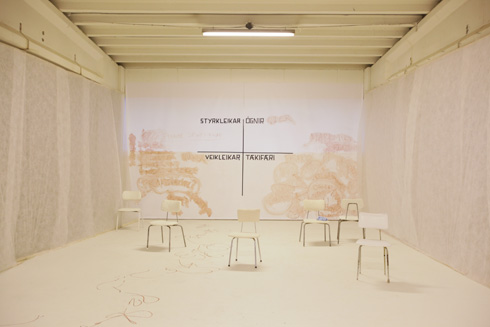 When Hugmyndahúsið first got started, booking space in the cubicle room was free, but a small fee was eventually introduced (6.000 ISK per month) because “people were booking space and not showing up.” Each group can use their allotted space for up to nine months, whereupon the group “graduates.” So far 56 companies have graduated, the most successful being Clara, an IT start-up now operating independently. Along with IT people, architects form another group that seems to gravitate towards Hugmyndahúsið, and a tour of the room revealed all sorts: accountants, knitting aficionados, board game creators, product designers, art festival organisers, Icelandic cinema promoters, software developers and more. And as Daníel stresses, they don’t have to be companies or “have something to do with money.” They can be projects, such as Betri Stofan’s brightly painted public benches and garbage bins, which suddenly appeared on Laugavegur this past summer.
Nor does one have to rent a square to make use of the facilities. Adjoining the cubicle room, an exhibition hall regularly hosts visual arts exhibitions, architecture conferences, and political meetings. For example, the newly formed association for democracy and sustainability, ALDA, “has been using the hall for its meetings almost everyday,” Daníel tells me. He points to one corner of the building where boxes of stuff line the walls: “This is SARE’s content provider. It is filled with recycled material that companies were going to throw away, but was brought here instead and now pre-schools in Reykjavík have access to it.” Next to this arts and crafts storehouse, is a recording studio. “CCP has a lot of equipment but no space, so a group of young filmmakers help out CCP in exchange for use of their equipment.”
THE HOUSE OF IDEAS GOES FISHING 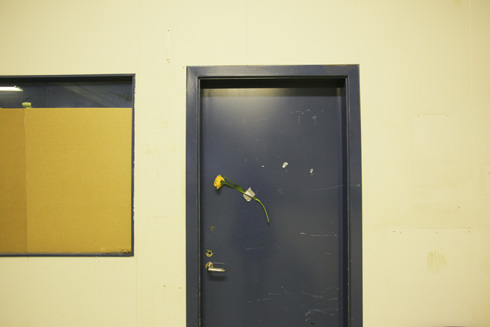 Last June, the Associated Icelandic Ports in Faxaflói harbour gave Hugmyndahúsið free lease on an old fishing net warehouse on Grandagarður 16. The warehouse, known as Útgerðin (“The Fishery”), amounts to 2500 square meters of raw, loft space and Hugmyndahúsið has been allocating units of space to individuals and groups practically for free: “You pay 2.000 ISK for the key, and then you get a thousand back if you return it in the end.” Despite the worn down appearance of the space, it has attracted all sorts of people from visual artists (especially recent graduates of Iceland Academy of Arts), architects (Borgarmynd) and designers (PopUp Markaðurinn) to hackers (Hakkavélin), alternative media initiatives (Krítík) and theatre groups (Áhugaleikhús atvinnumanna). Indeed the space is large enough to accommodate live theatre rehearsals and performances.
This past fall, Útgerðin hosted Hugmyndasmiðjan, a start-up seminar that involved some 200 individuals and 40 business ideas. At the end of the sixweek long seminar, six ideas were chosen as the best and rewarded 450.000 ISK from various sponsors in order to continue developing their projects.
CAPITIALISM AND THE ARTS
I ask Daníel whether enlisting corporations such as Íslandsbanki, N1 and Össur to provide prize money for Hugmyndasmiðjan risks compromising both the artistic freedom of individual participants and the academic integrity of the two universities behind Hugmyndahúsið, but he does not believe this is an issue. He underlines the fact that Hugmyndahúsið remains a non-profit organisation that receives no private funding: “the universities are its sole benefactors.” And although he likens the alliance between Iceland Academy of Arts and Reykjavík University to “two separate species talking to each other,” he maintains that the results have been largely positive.
Incidentally, Daníel was also involved in the Klink and Bank project, which saw Landsbankinn give Kling and Bang gallery free lease on a 5.000 square metre building in downtown Reykjavík between 2004-2005. Klink and Bank was then offered as a free studio and exhibition space to hundreds of artists. Still, Daníel asserts, “the artists working in Klink and Bank were not compromised by what Landsbankinn was doing. Maybe we were just naive, but there was very little cultural awareness about the implications of branding.” And the sponsor, Daníel adds, did not prevent grassroots organisations such as Saving Iceland (which gathered opposition against the Kárahnjúkar dam) and Nyhil (which publishes the politically leftist book series Afbaekur) to make use of the space. Moreover, he says, “at one point, courses in civil disobedience were being held in Klink and Bank, basically on offer through Landsbankinn, which at least goes to show that the bank was also naive in their understanding of what was going on there.”
CLOSING TIME 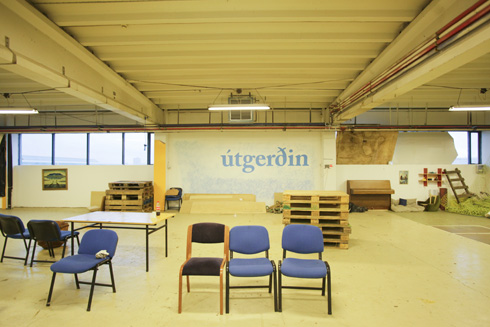 It has not been easy to keep Hugmyndahúsið and its subsidiary Útgerðin running, for as Daníel remarks about the latter, “it may look like a squat, but it’s not. We need to meet the minimum health and safety codes as well as pay for heating and electricity, and this has been tricky.” Moreover, the free lease runs out this February, so the people currently using the space will soon have to pack up their projects and leave. Hugmyndahúsið itself is currently facing the probability of shutting down, as the universities will stop funding the project this month. Although Hugmyndahúsið has applied for state funding, the prospect of receiving it does not look promising.
And yet, Daníel remains resignedly optimistic. “These grassroots things come and go…all Hugmyndahúsið does is provide the housing. And a house is merely a house, people are the main thing.” It seems if people really want to keep Hugmyndahúsið going, they will have to take it upon themselves to find another space.