In the weeks leading up to the municipal elections, it seemed no one was interested. The media took almost no notice of the elections—candidates had great problems getting attention. As usual, the economic collapse and its aftermath were the main focal points. April saw the publication of a thoroughly researched 2.000 page report by an investigative committee, as well as the Eyjafjallajökull eruption, which disrupted flights all over the Northern hemisphere.
But then the elections came—and suddenly they became very interesting. The result can be likened to a bomb going off right in the middle of the Icelandic political system. The elections in Reykjavík were especially dramatic—the capital has always been the venue of a fierce and quite symbolic contest between the left and the right.
A party of artistic types
But now a party that came out of nowhere celebrates a thumping victory. It is simply called The Best Party (Besti flokkurinn), and it is led by Jón Gnarr, a celebrated comedian and actor. Most of other people on the party’s list are what might be labelled as artistic, bohemian types—many of them live in the centre of Reykjavík, in the so called 101 area. None of these people had been even remotely involved in politics before.
All the same, The Best Party won 35 percent of the vote. It is now the largest party in Reykjavík, and it can dictate how the city will be run for the next four years. Most likely Jón Gnarr himself will become mayor, something nobody would have thought possible a few weeks ago. The day after the elections, Jón said he had realised that politicians were always interfering with his life. “So why should I not interfere with theirs?” he asked.
The Best Party started out as a joke, a parody of the political game. Jón made all sorts of ridiculous promises about a polar bear in a park dedicated to domestic animals, about an Alþingi ‘free of drugs before 2020’. He spoke in stale political phrases in order to underline the vacuity of the political debate. But all the same many insist that, compared to a lot of the things Jón Gnarr has been involved with up until now, the joke was not terribly funny. To parody something you have to know it—and Jón Gnarr didn’t seem very knowledgeable about politics.
Jón Gnarr and his comic characters
Jón Gnarr’s most famous creation is a person called Georg Bjarnfreðarson, an overbearing middle-aged bald man who has featured in three television series and a popular film. Georg Bjarnfreðarson, it turns out, is a Swedish educated Marxist, the son of a militant feminist who destroyed his childhood, a lonely and intolerable man who wreaks havoc wherever he comes. This is brilliant comedy with a dangerous edge, and some part of the left dislikes Jón Gnarr for this—his creation, Georg, even looks like Vladimir Lenin.
But it has not always been easy to distinguish between Jón Gnarr and his comic characters. He also does stand-up comedy where he draws upon his rather unusual life, as a son of elderly parents, a school boy with attention deficiency, a young punk, a taxi driver, a writer, a sometimes-Catholic, a worker at the Swedish Volvo factories, a father of five. He has no formal education, but his intelligence seems extremely alert. He comes through as being rather obsessive: in conversation he often seems to be thinking about something else. The impression is that he is not very interested in others beside himself. So it is quite a riddle how he will perform as mayor.
Jónsi of Sigur Rós as president?
But it must be mentioned that in The Best Party we have other people who been quite successful in their own right—and might not be worse at running a city than career politicians. For example, Einar Örn Benediktsson, Björk’s co-frontman in the globally celebrated pop band The Sugarcubes; Óttarr Proppé, a bookseller cum-punk/glam rock singer; and celebrated cartoonist Hugleikur Dagsson, whose work is published worldwide. Even if politicians might find the idea of working with these types quite strange, they are undoubtedly creative people.
After the elections Jón Gnarr seemed both worn out—his mind wandering off—and exuberant. He talked about having done interviews with The Wall Street Journal and the German magazine Stern. He seemed to be flattered by their attention, and even suggested that his way of doing politics—politics with a sense of humour—could be exported. Some party members said their next stop would be the presidency, with Jónsi, the singer from Sigur Rós, running for president with his partner Alex Somers by his side.
Of course things have become more serious. At the time of writing, The Best Party is in talks with The Social Democratic Alliance (Samfylkingin) to form a majority in the city council. This would take over from the majority held by the conservative Independence Party and the marginal Progressive Party (Framsóknarflokkurinn). In fact politics in Reykjavík have been very chaotic for the last decade, with a total of seven mayors since 2003 (four since 2006). Samfylkingin, the party of PM Jóhanna Sigurðardóttir, suffered heavy losses in the elections, giving a blow to party VP Dagur B. Eggertsson, who headed the list in Reykjavík. Jóhanna and Dagur are not noted for their sense of humour; so working with a bunch of comedians might frankly make them look awkward. 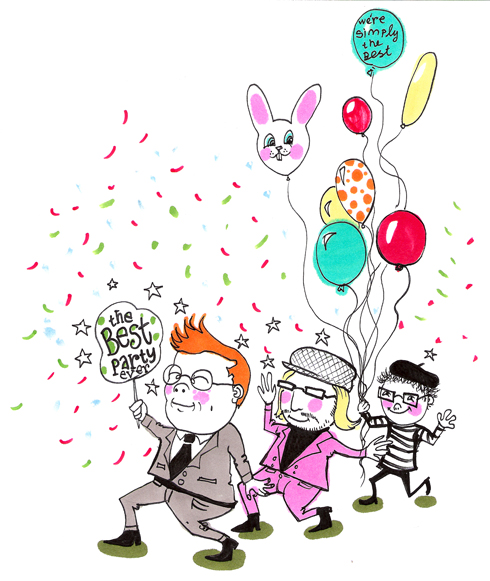 Clean Left Greens also suffer
Of course the victory of The Best Party is mainly due to the absolute disarray of politics in Iceland and the lack of trust in politicians after the total crash of the economy. The police are now taking bankers into custody, and politicians that accepted substantial sums of money from now-discredited financiers are under great pressure to resign. One of them did on the eve of the elections, but to no avail. The perception is that the parties have not cleaned their stables; that they are only waiting for the population to forget their dismal performance.
But it has to be noted that The Best Party took a lot of votes from the Left Greens (Vinstri grænir) who are the only party among the ‘Big Four’ that bears no responsibility for the collapse. The Left Greens, now finally in government after years in opposition, have long been a channel for dissatisfied voters, but this time they abandoned the party in droves, especially young males. It is a bit ironic that the leader of the Left Greens in Reykjavík is a militant feminist who in some ways might be said to resemble Georg Bjarnfreðarson’s activist mother in the film.
After the election, PM Jóhanna Sigurðardóttir remarked that this might mark the end of the Icelandic party. Traditionally we operate a system of four parties, which hasn’t changed much through the years. Three of them, especially the conservative Independence Party (Sjálfstæðisflokkurinn)—really the reigning party in the history of the republic—the Social Democrats and the Progressive Party are blamed for the economic collapse and the ridiculous exuberance that preceded it. The Left Greens are free of guilt in this sense, but they are blamed for selling out all their left wing ideals in the present government where they share the power with the Social Democrats—but which is really controlled by a strict program from the International Monetary Fund.
Voters revolt in Akureyri
In other parts of the country the parties also lost heavily. In Akureyri, which really is the second capital of Iceland, a list of independent citizens won a clear majority, almost wiping out the old parties. In towns such as Hafnarfjörður, where there was no challenge to ‘The Big Four’, voters protested by not showing up or by handing in empty ballots. True the Independence Party held out in some of the towns on the outskirts of Reykjavík where affluent people reside in their villas and the standard of living is very high, but it is said that in these places the support for the party is so strong that it could field a bag of potatoes with the party colours and still win the election.
Bound to fail?
The question is whether a similar challenge could be mounted in parliamentary elections. Unless the present government falls these are not due for another three years. The traditional parties are very weakened. Their leaders face challenges from outside and within, many of them seem only to be holding their position for the time being. The task of the government is gargantuan. Iceland is one of the most heavily indebted places in the world. The state, companies, municipalities and individuals are riddled with debt—budgets will have be cut in a way that will surely create disturbances.
Another way is of course for the country to produce its way out of the crises, but the fishing industry is heavily in debt as well. There is a raging debate on how fishing quotas are allotted. In the present system, seventy people basically “own” seventy percent of the fish that swim in the sea around Iceland. Energy is also a major issue—whether our energy resources, hydroelectric and geothermal, should be used for heavy industry, i.e. aluminium factories, and to what extent foreigners should be allowed to invest in these natural resources.
An application to join the European Union is a further cause of friction. With a majority of the population having turned against the EU, it difficult to see that this will lead to anything but a resounding NO.
So, unsurprisingly, there are demands that the government resign. But then, the opposition seems anything but eager to take its place. In an atmosphere where trust in politics is at a freezing point, everybody seems bound to fail.
All the same, some relief can be derived from the fact that comedians and musicians seem bound to take over in Reykjavík, and not populists, right wing extremists or other baddies. But then the task that awaits Jón Gnarr and his bevy of artistic types is to run a city that has its fair share of debt and not a lot of money to spend on funny things. To be realistic: they might just as easily fail as the other parties; at least it might be difficult to know what note to strike when you move from a joke into seriousness.