Not everyone was chugging beer and watching Eurovision during the last Saturday of May, you know. Some of us were following the municipal elections going on all over Iceland. There were a number of interesting things happening in towns and villages across the country, but all eyes were turned to Reykjavík, where The Best Party (Besti flokkurinn)—originally created by comedian Jón Gnarr as a parody of Icelandic politics, but then turned into some kind of serious campaign—were projected to do exceedingly well. And do exceedingly well they did.
Voter turnout in the capital was only marginally better than it had been during the last elections, in 2006—about 56,000 ballots were turned in from about 85,000 eligible voters. When they were all counted, the Best Party managed to win six of Reykjavík city hall’s 15 seats.
Every other party took losses. The Independence Party (Sjálfstæðisflokkurinn) went from seven seats to five, the Social Democratic Alliance (Samfylkingin) went from five seats to three, the Left-Green Party (Vinstri grænir) went from two seats to one, and the Progressives (Framsóknarflokkurinn) lost their one and only seat. Ouch! 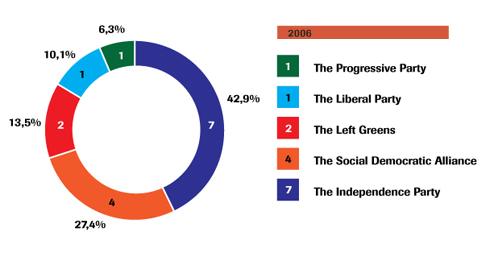