Davíð Oddsson On The Warpath 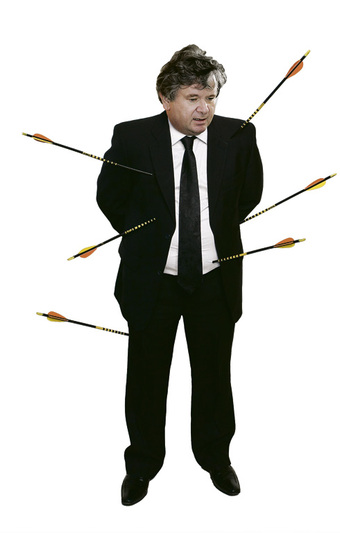 In the summer of 2000 I met then leader of the British Conservative Party William Hague. The party was doing very badly in the polls. I mentioned to Mr. Hague that in Iceland we had a conservative politician who was a born winner, had never lost an election, was idolised by a large percentage of the population—a man who could give the British Conservatives a piece of advice or two.

The man was of course Davíð Oddsson. By then he had been prime minister of Iceland for nine years, before that he was a popular mayor of Reykjavík for a decade. Iceland was experiencing prosperity; Oddsson was even being mentioned as the greatest politician of the 20th century by some.

As I mentioned to William Hague, Oddsson was a man who could have made it to the political top of any country—extremely intelligent, witty, with a way of coining catchy phrases, as I pointed out. He also had an artistic temperament, having been a radio comic in his younger days, as well as a playwright, part time actor and writer of short stories. He was also very cunning, even ruthless, always managing to outsmart his enemies.

Oddsson was never your run of the mill party man—he was far too
unconventional for that—even if his first loyalty was always to the
Independence party and its traditions. In parliament he might thrash
his opponents with his sarcasm, whereas at party conventions he put on
the guise of a pope, as if these were almost holy gatherings.

Thus Oddsson was always quite fascinating, and even to this day he
remains somewhat of a mystery. A real biography of the man could be
quite a read.

In 2002, things started to go sour. Maybe Oddsson should have quit by
then. Had he left the stage, he would have left a shining legacy for
the history books. But this was not in his character. Never very
principled about his methods, it became evident that he was running
things with a tight group of his cronies, some of them old school
mates, others partners from his bridge table, many of whom became very
adept at badmouthing his adversaries and spreading gossip. Oddsson
became increasingly capricious and vindictive. His charm also started
waning; the jokes became rather lame, appealing only to the party
faithful.

At this stage Oddsson no longer tolerated any opposition. The
atmosphere within his sizable parliamentary party has been described by
insiders as “suffocating.” Party meetings became hallelujah-conventions
where no criticism of the leader and his policies was tolerated.

Icelandic society in that period has been compared to an alcoholic
household, where you never know what mood the pater familias might be
in at any given moment, so everybody has to tiptoe around him.
His popularity was also dwindling. Almost single-handedly Oddsson
decided to declare Iceland’s support for the invasion of Iraq, putting
Iceland on the list of the “coalition of the willing,” possibly as a
way of appeasing the US government intent on closing its military base
in Keflavík. Oddsson even went to the White House and sang a birthday
song for George W. Bush. However, the Americans left soon after. There
are still demands that Iceland’s support for the invasion be researched
by the parliament.

The culmination of this transformation was his mission against some of
the newly wealthy business Vikings, notably Jón Ásgeir Jóhannesson of
Baugur and his father, retail magnate Jóhannes Jónsson of the Bónus
chain stores. Oddsson was in some ways prescient about the dangers
posed by these new financiers. But, true to his nature, he took this to
a personal level, once referring to Jón Ásgeir as a “hooligan”.

Not a question of principles

Oddsson put enormous effort into trying to shut down the Jón Ásgeir’s
empire of newspapers, radio and television stations—later thwarted by
the Icelandic president’s refusal to sign the bill—while at the same
time privatising the main banks into the hands of other groups of
business Vikings, namely father and son team Björgólfur Guðmundsson and
Björgólfur Thor Björgólfsson—later of Icesave fame—who had just
returned from Russia, where they apparently had become fabulously
wealthy from making beer.

Therefore, as often in Oddsson’s history, this was not a question of
principles, but of his personal likes and dislikes. Even if he was
surrounded by liberalist ideologues from his early days, he never had
much patience for analysis or philosophical contemplation. For him, Jón
Ásgeir and Jóhannes were bad guys; the two Björgólfurs were good guys.

Simple as that. This remained his version of reality when he was
governor of the Central Bank and the whole Icelandic banking system was
crumbling down—including the Landsbanki owned by Team Björgólfur, who,
as it transpired, hadn’t even paid for the bank in the first place.
By then Oddsson was ill and had to convalesce for a while. He became
foreign minister for a year, and then he nominated himself to be
governor of the Central Bank. His successor as party leader and Prime
Minister was former Minister of Finance Geir H. Haarde, a faithful
party man, noted for being fair and polite. Not a man with a big ego.

The ego has not yet landed

Haarde once remarked in an interview that some people were maybe
destined to be number two. But now he was out on his own as a PM, in a
party that had been moulded by Oddsson’s ego. And that ego was still
around, as its bearer had only moved over one small lawn of grass, from
the Prime Minister’s Office to the Central Bank, where he kept on with
his machinations via his famous telephone calls. Oddsson prided himself
on not writing anything down when he served as PM, and of being
computer illiterate.

The relationship between these two men, Haarde and Oddsson, might be
one of the focal points in understanding the crisis that culminated in
October 2008. Of course it is extraordinary to make a controversial
politician of Oddsson’s stature—a lawyer, not an economist—into
governor of a Central Bank. As the crisis developed, Haarde remained in
close contact with his old leader while at the same time keeping
information from his own ministers.

Oddsson claims that he gave numerous warnings of the impending
collapse, but Haarde is very vague on this. To many of Haarde’s closest
collaborators, it came as a complete surprise when one of the banks,
Glitnir, was suddenly taken over by the government, triggering the
downfall of the remaining banks a few days later.
Many of these decisions might be understandable, but good governance they were not.

At this point Oddsson came into a meeting of the government, a
coalition of the Independence Party and the Social Democrats, and
demanded that a national government comprising every party be founded.
This could conceivably have happened through complicated political
manoeuvres, but the history of Oddsson’s very advocacy of the idea made
it almost impossible.

It seems that Oddsson had become a sort of an inferiority complex
inducing big brother figure to Haarde. He had been following Oddson’s
lead ever since his school days. For him, sacrificing Oddsson, for
example by firing him from the Central Bank, was unthinkable, whereas
Oddsson would not have hesitated to sacrifice Haarde in the blink of an
eye.

Of course, Haarde was first Minister of Finance and then Prime
Minister, so he has much to answer for. On the other hand, he makes for
a convenient fall guy. Thus he is being presented as a sort of an
aberration within the party history, an error best forgotten, whereas
the party policies and institutions were sound at all times.

A defining moment was the party convention in March of 2009. Members of
the party’s grassroots had prepared a meticulous report on how things
had failed and on the need to reform the party. Late in the convention,
Oddsson asked for a word, burst upon the stage, and gave a speech where
he tore the report apart with his usual sarcasm and, true to form,
blamed anybody but himself. In his mind there was no room for soul
searching. Mistakes should never be admitted.

At that time, the new left wing government had successfully driven
Oddsson out of the Central bank, whose policies had failed dismally,
fuelling economic hypertension, currency speculation and carry trade.
The banks had grown to twelve times the size of the economy, with the
fatal flaw of an unsound currency and a Central Bank that was incapable
of backing them up. Through complicated speculation, the banks had
managed to strip the Central Bank of its funds, leaving it technically
bankrupt, so the government had to come to its rescue.

Oddson on the warpath

Never one to rest, Oddsson was now on the warpath. He is not a man to
sit down and write his memoirs, for him it is unthinkable not to be
pulling the strings. He set his eyes on the editorship of Morgunblaðið,
the formerly near-almighty daily newspaper in Iceland. It is said that
he called in all sorts of favours to attain the position, and he
finally succeeded when a small group of fishing-quota owners managed to
buy the almost bankrupt newspaper, now but a shadow what it was in its
heyday.

Since Oddsson took over, readers have abandoned the newspaper in
droves. Now, the newspaper that spent many decades building a broad
readership base has turned into a vehicle for Oddsson’s personal tirade
of likes and dislikes; it is militantly anti-EU, pro quota owners,
against any compromise in the Icesave scandal, vehemently anti-Jón
Ásgeir and Jóhannes Jóhannesson, who teeter at the brink of bankruptcy.
Oddsson’s energy is remarkable; he himself pens the majority of
Morgunblaðið’s editorial materials himself.

This erratic giant of Icelandic politics for three decades is thus
still trying to decide the fate of his party, and of the Icelandic
nation. Political enemies refer to his tight group of followers as “The
Court of the Dead,” which of course is rather rude. That, however,
reflects the anger and strong feelings Oddsson provokes in many parts.
In some ways, it is convenient to use American politics as metaphor for
the Independence Party, and talk about Oddsson’s unapologetic
Republican group and the more conciliatory Democrat side to the party.

Many within the party are still very susceptible to Oddson’s magic. His
influence seems to be on the rise again, and some even see a return of
the bad old days when party members dared not speak their mind for fear
of retribution. Present party chairman Bjarni Benediktsson seems very
indecisive; he faces the challenge of keeping at least the perception
of the party being at peace, not an easy task with the old leader and
his big ego still lurking.

The more timid “Democrats” fear Oddsson’s ascent and have finally begun
organizing themselves by forming a pro-EU fraction within the party—a
move considered treasonous by many of Oddson’s followers—and by placing
one from their ranks as editor of Fréttablaðið, Iceland’s most widely
read newspaper: owned by the aforementioned Jón Ásgeir Jóhannesson, the
constant arch-enemy of Davíð Oddsson.