“I’m the first openly gay, fully licensed ship captain in Iceland!” Einar Örn Einarsson announced over the ship’s loud PA system while welcoming everybody aboard. The Elding Queer Cruise burst into a chorus of cheers and a roaring wave of applause.
The overwhelming feeling of camaraderie and mass-esteem that filled the ship at that very moment was one that punctuated the entire weekend, as same-sex couples engaged freely in PDAs, drag-aficionados were out in large numbers and the city was awash with rainbow colours. With an estimated 80,000 people partaking of the 11th annual festivities, Reykjavík’s Gay Pride 2009 was a force to be reckoned with.
For all y’all not around to take in the weekend first-hand, and for the rest of you who just can’t get enough, here are some highlights of the weekend:
All hands on dick deck: Queer Cruise, Friday @ 21:30
While the official Pride program pegs the Queer Cruise as the first of its kind in cooperation with Reykjavík Gay Pride, Elding is no wallflower in the world of gay cruises.
“We did our first Gay cruise in 2002 and it was a whale watching tour,” explained Queer Cruise captain Einar Örn Einarsson. “It was great, we had 50 or 60 gay men— mainly leather men!—and we had the gay flag flying. Other boats around us asked us ‘What nation is this? Do you have a group from some Pacific island, or what?’”
The gay flag was flying on the second level of Elding’s ship Friday evening for the hour-long cruise that took gay and lesbian partiers around Viðey Island, stopping briefly to ogle the puffins on Akurey Island. Beyoncé’s Single Ladies was the unofficial theme song of the cruise (and of the entire Pride weekend, as other events would confirm) and the cruisers danced along, drank and cheered as a wet-suited man wake-boarded behind a Sea-Doo in the chilly waters of the north Atlantic.
These 15-cm platform stilettos were made for walking: Gay Pride Parade, Saturday @ 14:00
The belle of the Pride ball, the Pride Parade, made its way down Laugavegur in style Saturday. Onlookers lined the streets numbering in the tens of thousands, applauding the rainbow-flag-adorned motorcycles that lead the way and keeping the positive energy going for the flatbeds-turned-dance floors carrying outlandishly dressed dancers.
There was a bit of confusion, however, as the parade seemed to have ended prematurely, prompting the crowds to take to the streets following what they thought was the final float toward the concert at Arnarhóll. This actuated parade organisers to take to the streets themselves, directing bystanders to clear the way for the remainder of the procession.
Then came the queens. Goddamn. As that Beyoncé anthem blared from a boombox behind them three queens in asymmetrical leotards, nylons, stilettos high enough to induce sympathy pains in anybody with a nervous system and smeared with enough fake-tan to keep Paris Hilton bronzed for a year, shook what their respective mothers gave them. Their choreography could put Sasha Fierce herself to shame—props to Miss B if she could work it the length of Laugavegur with half the stamina of these three. Hell, I’d put a ring on it.
Who likes short shorts? Arnarhóll Concert, Saturday at 15:30
The concert was alright. Crowd watching was more entertaining than the performances at this point, at least for foreigners not familiar with the Icelandic tunes pumping from the loud speakers into the waiting ears of the masses covering every available space on the hill.
Highlight: Haffi Haff’s mind-bogglingly short shorts. They beg the question: at that length is the title “shorts” really appropriate or should one refer to such a garment as “denim panties”?
Lowlight: Four American men who, when asked whether they had been enjoying Pride thus far, commenced a diatribe along the lines of “we’re not here for Pride, we were out of town salmon fishing and if y’all want to continue to receive our American dollars to save your failed economy you had better work out a way to stop this queer stuff from messing up local traffic. It was a pain in the ass driving back into town today.” Charming.
Got me tighter in my Dereon jeans: Saturday, Sódóma @ 21:00 & NASA @ 23:00
It was a packed-house at Sódóma, where The Creamgirls performed ahead of schedule. It’s a shame that the place cleared out rather quickly following the band and a dwindling crowd took in the energetic performance of Robotron, a rock duet from Berlin. The front-man/keyboardist was bouncing around that stage and the surrounding area, singing (screaming?) out lyrics like ‘do you want a banana?’ as if he were a cartoon character of himself.
Páll Óskar at NASA. Awesome. The club was at capacity as the man himself — donning a puffy sequin-adorned blouse tucked in to metallic stretch pants — gave the crowd what it wanted. ABBA medley? Yes please! Single Ladies (Put a Ring on It)? But of course! The gay-Reykjavík spokesman kept the energy up and made bodies sweat, provoking roaring cheers when he stepped from behind his disco-dance floor inspired podium to shower his adoring crowd with colourful confetti.
The Day of Rest: Sunday, All Day
Leave it to Reykjavík to live up to its party moniker and serve up a world-class Pride to put all others to shame. As a trio of Pride-tourists from California and Ohio said: “You have more events leading up to Pride than even San Francisco; we don’t have the Thursday, Friday, Saturday, Sunday thing. It’s amazing!”
For some Pride continued throughout Sunday, with the T-Dance at BARBARA and the Rainbow Church service at Háteigskirkja, but for others Sunday was a day of rest and recuperation from a whirlwind weekend of non-stop LGBT craziness. Those who went the distance should give themselves a hearty pat on the back and the rest should strap on their stilettos and begin stamina training for Pride 2010.

The excitement of Pride is contagious; everybody meandering their way through the crowds on Laugavegur, Lækjatorg and Arnarhóll with a smile on their face and spring in their step. The following are some of the good folks that were out and about and enjoying Reykjavík Pride 2009. 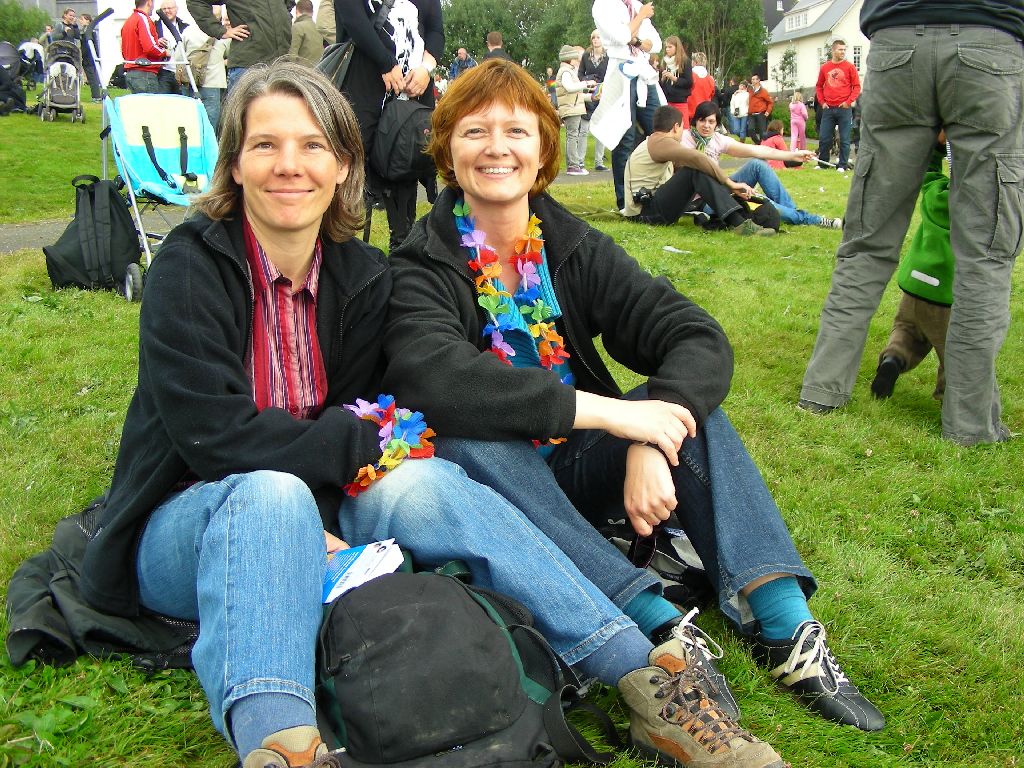 Names: Daniella & Michaella
Country: Germany
“We weren’t planning on being here for Pride, it’s just a happy coincidence,” said Daniella. Commenting on what their favourite part of the festivities had been so far Michaella said: “I like that so many people attend. So much diversity. The children participating was great.” 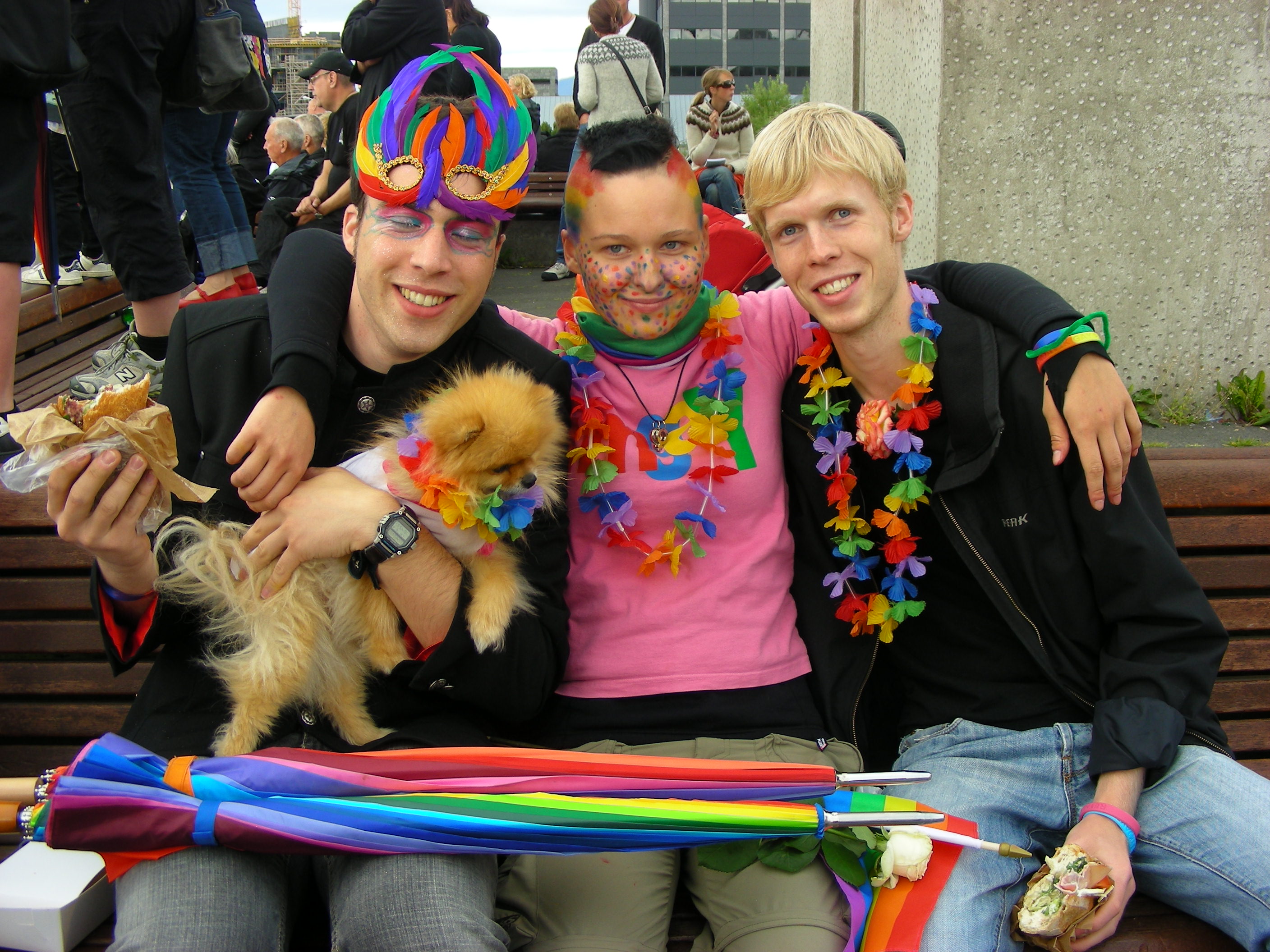 Names: Mark & Klaus
Countries: Denmark & Germany
“I came here for Pride but I lived here previously so I’m here visiting friends as well,” explained Mark, with Klaus adding that he was visiting friends and enjoying Pride simultaneously. As for what they had enjoyed most so far, Mark spoke for the pair, saying, “I liked the drag show the best, it was great!” 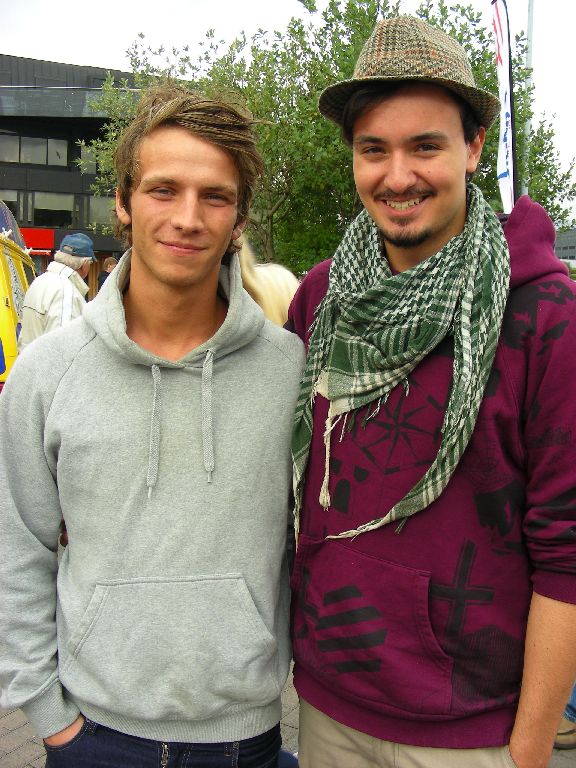 Names: Andre & Daniel
Country: Iceland
“The parade was alright, maybe they were short of money this year. I wasn’t here last year but the year before was much better,” explained Andre, who elaborated that their favourite part of the parade were the two floats from Thailand. “They just looked happy and in a good mood and dancing; it was nice.” 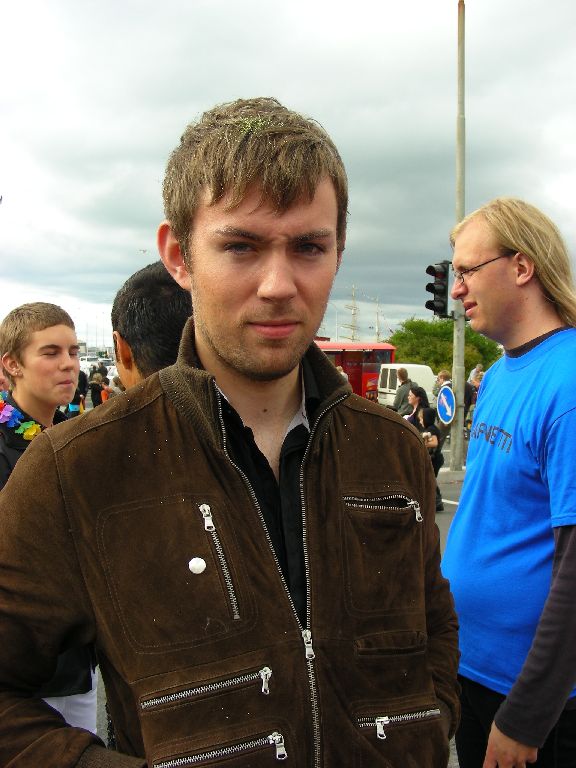 Name: Magnús
Country: Iceland
Magnús walked in the parade for the sixth time this year and planned on checking out the Creamgirls and Robotron concert at Sódóma Saturday night. “I like everything about the weekend,” he said. “This mood that everyone has is great. Everyone is happy, there’s no prejudice or anything like that.” 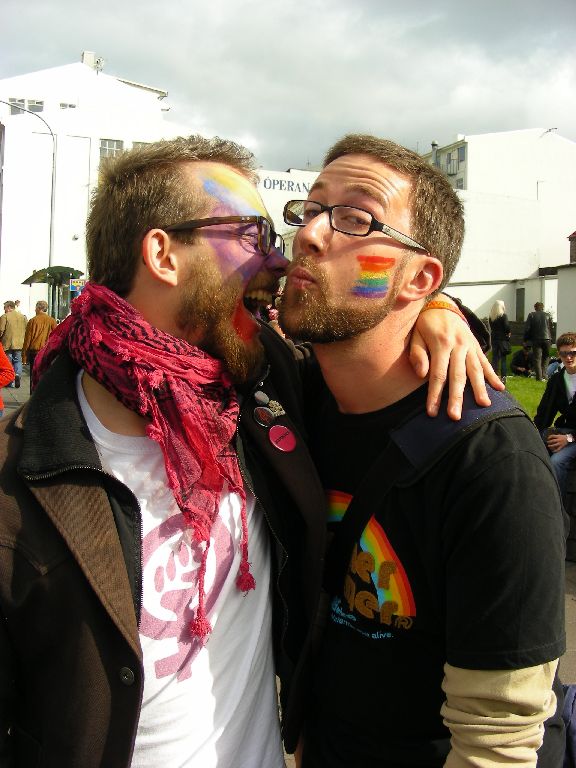 Names: Thomas & Herald
Countries: Denmark & Germany
“The parade was much fun,” said Herald, who had walked in the parade with the gay association of the university. “I very much enjoyed having good weather, which is expected, of course, because it’s GAY pride, so the sun must come out!” As for their plans for the evening, Thomas said, “there’s something everywhere—8pm at Sódóma, 11pm at NASA—there’s something everywhere so I really have no idea what I’m going to do.” To which Herald added: “You don’t have to be gay to be queer and I’m definitely going to be queer tonight!” 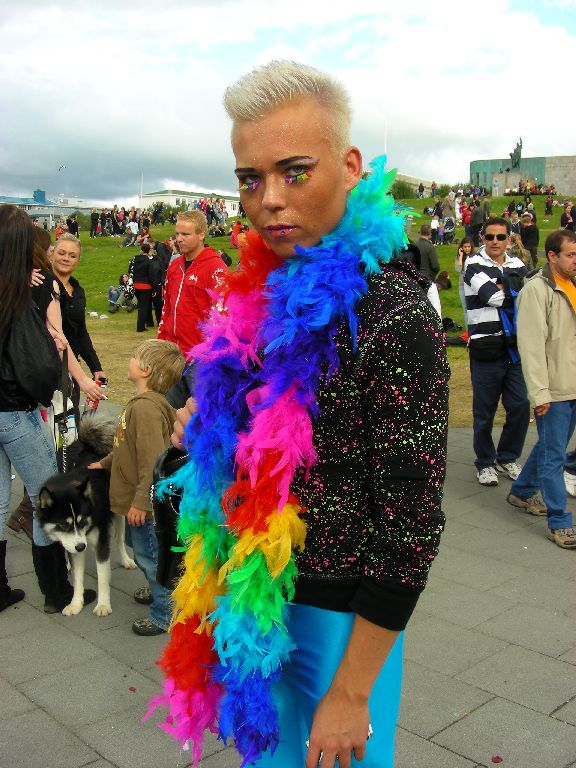 Name: Óli
Country: Iceland
“I love it! It’s amazing! I’ve gone to all the events that gay pride was offering. I was also in the parade, I had a truck.” Aside from taking part in the parade, Óli was planning on hitting up NASA for the Páll Óskar DJ set and then to party the night away BARBARA’s ongoing Pride party.