Ten years of stage experience as one of Iceland’s favourite indie-pop bands has taught Mammút how to roll with the punches. For instance, a bit of minor electrocution at the start of their latest concert on January 30 at Gamla Bíó, which left vocalist Kata and bassist Ása running off stage to put on their boots. Rather than coming off as a disaster, which it easily could’ve been, Mammút made us love them for the quirky occurrence, and ended up being just another reason why the concert was so electrifying. 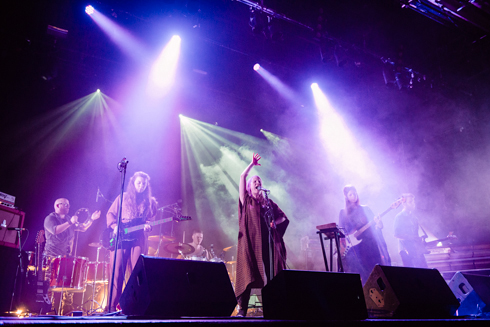 Mammút played a mix of older material and songs from their new album ‘Komdu til mín svarta systir’ (“Come To Me Black Sister”) which was released in October and has won the band best album of the year by Fréttablaðið, beating out Sigur Rós’ ‘Kveikur’ and Grísalappalísa’s ‘Ali’. The concert was kinetic to the point of disbelief. This was probably helped along by the fact that once the bass started rolling, the very seats we were sitting on acted like lightning rods shooting the vibrations straight into our bones. That moment between songs, just after the music cut out, felt like the split second after being defibrillated back to life, that feeling of being aware that your whole body is humming in tune with some giant organic rhythm. 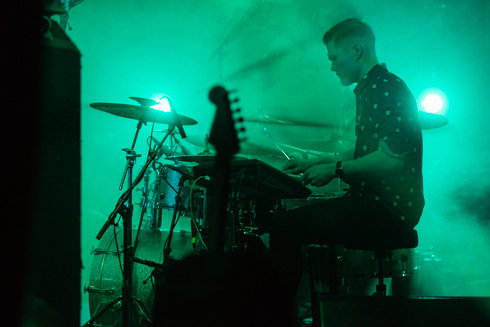 It seems to me that Mammút’s greatest strength as a band is the impressive synergy that exists between them, one that makes it possible for them to achieve their defining chaotic yet haunting sound. A lot of the credit for holding everything together should go to Andri’s solid drumming skills. It can be very tempting when performing with such talented musicians to really let go and show off. Andri managed to keep the drum line in control and somewhat simple if that’s what the song needed in order keep the whole sound strong and fierce. Andri’s ability to ground Kata’s spectral vocals and Ása’s wild bass riffs pulled together Mammút’s sound in a way that might be easy to overlook.

Mammút is one of those bands that knows what the audience wants and delivers it. Although it seems like it would be difficult to get a seated audience excited and into the groove, Mammút made the whole concert feel like a personal experience. Just looking around I saw and felt everyone losing themselves somewhere in Alexandra and Arnar’s hard rock guitar riffs and Kata’s harrowing melodies. The band even mixed things up a bit with a short piano breakdown piece by Ása, and though the piece didn’t have as much of an emotional impact as it might have been looking for, the band gets real kudos for bringing in something different to break up the concert.