You have to be a pretty hardy soul to attend Eistnaflug. Set in the isolated fjord of Neskaupstaður, the journey alone takes about 9 hours without any stops. I guess you could play fast and loose with the speed limit, but that would be very naughty of you. If you do, may I recommend blasting some Slayer. Fortunately though there are a few decent campsites en route, so if you do set out late, you don’t have to do the route in one shot.

Once you arrive you have the option of staying in the family or the party camping area (or a hotel if you’ve reached that age). If you go for the party site, don’t expect much sleep. There will be some noisy person or other at all hours, kicking up some sort of fuss. Against our better judgement and the advice of others, we braved the party site for the entirety of the festival. I am still not sure how I feel about that decision. Then the festival on its own is not for the faint hearted. Three days (four, if you count the all-ages show on Wednesday) of pure rock fury spread across three venues.

The festival proper kicked off with an ear shattering performance from AMFJ. I have whinged about the lack of volume at previous AMFJ performances, but I will not do so this time. A noticeable amount of people struggled with the high volume of his mangled electronic assault, but it was entirely necessary. A great way to kick off the festival. The prize for the sweetest moment of the festival also goes to AMFJ for checking that a young onlooker was wearing ear-protection during his set. The little chap was, so don’t you worry. 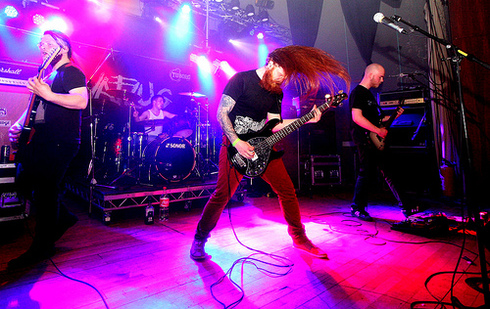 Although the volume was pretty much spot on for AMFJ, that was not the case for a lot of the performances at the main venue (Egilsbúð). I tried scoping out various spots around the venue, but for most bands the guitars were not clearly audible. A minor problem, but definitely something that could be improved. It meant that bands like Norn, Momentum and Morð were rendered a little impotent in their attack. 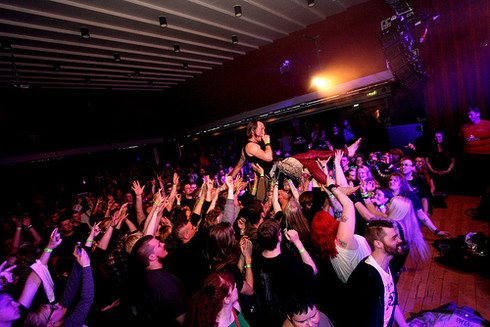 In fact the band with the best sound on Thursday was Dimma and I’d rather go deaf that suffer through their tepid, anaemic attempt at rock again. Plastic Gods ended the evening and fortunately they can’t really be described in any such terms. The sound was a little improved and their heavy as hell sludge came through loud and clear, resulting in a pretty harsh ‘bangover’ the next day.

Along with my ‘bangover’ I had to suffer the consequences of my miserly nature. My tent purchase might have seemed like a good choice at a cool 2,500 ISK, but it was all you could expect for such a paltry sum. My six foot frame could barely fit in it and, more worryingly, its lack of secondary lining meant that anything touching the edges (i.e. pillow, sleeping bag, me) got soaking wet via some form of osmosis. Luckily the sun did break through to dry things out. 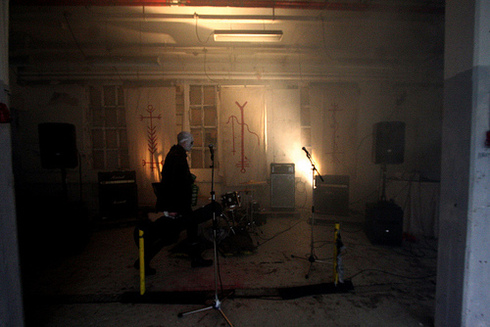 On Friday it seemed like most of the highlights could be found in one of the off-venue locations, The Mayhemisphere. Morð more than made up for iffy sound the day before by pulling out a far more vicious and feral performance. Their black metal may not be the most innovative out there, but its aggression more than makes up for it.

In amongst all the metal madness, Pink Street Boys allowed for some respite with their blown-out rock and roll. Neat melodies and rocking riffs buried under a wall of noise. So good. They need to record soon. Then to add to the anything goes nature of the Mayhemisphere the performance by KVLTGÖRN involved two guys stood in a stack of car tyres each with their heads covered in netting. They then proceeded to play odd electronic music and then fall over so they could be rolled out of the venue. Odd, supremely odd… but also brilliant.

World Narcosis conclude the highlights for Friday. I had been waiting to see them since their 7” was released a couple of years back and they did not disappoint. A full on grinding attack with some terrifying vocals from bass player Halla. Special mention should go to their drummer Ægir, who had played seven sets by this point with his various bands. The guy is a machine.

After a heavy Friday there are few things you really don’t want to wake up to. Near the top of the list at an isolated festival that requires a long journey home is a flat tyre. Well, that is what happened. After much hungover jittering about, we got it sorted. Things were back on track. 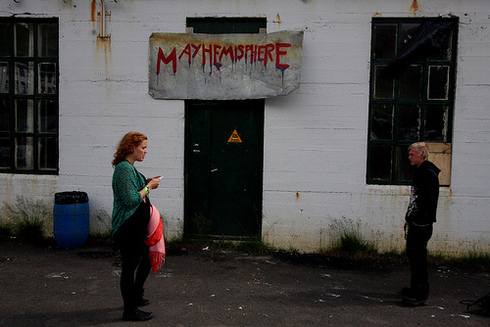 Again finding myself in the Mayhemisphere, Döpur (which may or may not have been Krummi Björgvinsson doing whatever the fuck he wants) started things off. He played to a sparse crowd, but it was one of my favourite performances of the festival. It ran the gamut from propulsive electronica to blistering noise to howling vocals and blast-beats. Weird, wonderful and pretty much unclassifiable.

The best in show prize however went to the collaboration between Kælan Mikla, Krakkkbot, AMFJ and Norn. Beginning with Kælan Mikla’s minimal post-punk which heaved, sighed and screamed before bleeding into Krakkkbot’s undulating, ever increasing layers of noise before colliding into AMFJ’s ear-punishing aural armageddon before crumbling and devolving into Norn’s ultra-punking, literal (LITERAL, my clothes were covered) blood-bath, I can safely say that I have never seen anything like it. 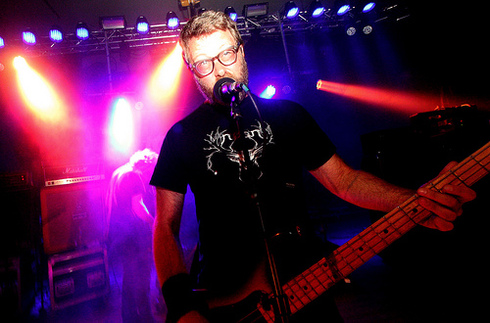 After that, it was hard to find anything that could quite match it. Muck put in a solid performance back over at Egilsbúð with their chaotic hardcore and Red Fang sure as hell rocked all out which resulted in a constant stream of stage-divers, but dammit, I just wanted to be covered in blood again. Here’s to next year!