Making ‘I Send You This Place’

Two years ago, we moved to Iceland. We left ten months later. Those close to us have said that we had returned to the States as aliens. Our minds, our bodies, our spirits had changed. Something had happened. We had gone crazy.
In fact, that was half the point. We spent much of our time in Iceland trying to figure out whether or not Andrea’s brother, who has been institutionalized off and on for the past 8 years for his diagnosis of bi-polar and schizophrenia, is actually crazy. When living in a place where the sun only comes up for 4 hours one part of the year, and doesn’t go down at all during the other, one’s perspective on ‘crazy’ gets re-defined. 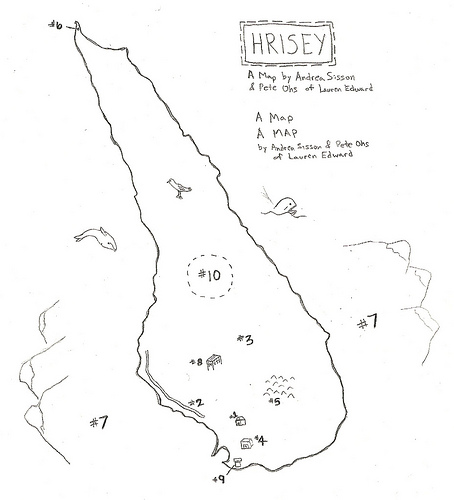 We translated this experience into a feature-length documentary called ‘I Send You This Place’, premiering internationally at Reykjavik’s International Film Festival (RIFF). The film had its world premiere earlier this year at the Full Frame Documentary Film Festival. Much of the film was shot while living on the small island of Hrísey, tucked away in Eyjafjörður, one of Iceland’s northern fjords. This petite island is essentially a compressed and concentrated version of Iceland. As a visual aid, we’ve drawn a map including numbers to identify locations significant to the film and to our experiences, should any of you wish to partake in a similarly intensive self-examination that the island so readily facilitates.
1. The old schoolhouse where we lived (also known as Gamli skóli)
2. The very, very long road we would often walk by and occasionally walk down.
3. The point on the island where one can see water in all directions.
4. The “convenience” or “grocery” store – conveniently open for only 2 hours a day.
5. The þúfur (tiny mounds) where we became 5 year olds again hopping from one to another.
6. The northernmost tip where we could squint and pretend to see the North Pole. The entire island only takes about 2 hours to walk from bottom to top.
7. Mountains in all directions. Giant, snow-covered, ancient mountains.
8. Racks of drying fish carcasses – heads and spines dangling on a rope, smelling and rattling in the wind.
9. The red and blue warehouse doors of possibilities.
10. The island itself. There is something about islands that heightens the reality of a metaphor.