A Meeting of Iceland’s hottest bands

Árni Sveinsson’s film ‘Backyard’ makes Iceland’s music scene feel like a big happy family. The story goes like this: Árni Rúnar of FM Belfast decided he wanted to capture Reykjavík’s current music scene on film. Reykjavík is a small town (compared to Tokyo, Berlin and New York at least) and so all Icelandic musicians seem to be friends or acquaintances. On Culture Night 2009 Árni  One (the musician) and Árni Two (the filmmaker) gathered a bunch of friends in the Árni One’s backyard to celebrate a relaxed and family-like music festival, Iceland-style.
Neighbours were invited, equipment was lugged around cars and umbrellas remodelled into stage decorations. Among the most important questions at that point were: ‘Should we use the plant from the living room to make the backyard look nicer?’
The 10 square metre recording studio in Árni’s backyard was set, the cameramen found their spots around the ‘stage’ and also on top of the studio and the bands were prepared to perform—and so the recording began. Seven bands: Borko, Sin Fang, Hjaltalín, Reykjavík!, múm, Retro Stefson and FM Belfast, performed short sets of music, the movie ‘Backyard’ features a song from each in full length.
During the performances, the film captures not just the musicians but also the audience consisting of  other musicians, children, older people, hipsters, tourists… well, let’s call it a mixed bag of people. In the beginning they sit there quietly sipping on some coffee or cruising around on their tricycle (depending on age). By the end of the night the audience had turned into a crazy mob jumping up and down to FM Belfast’s ‘Underwear’. 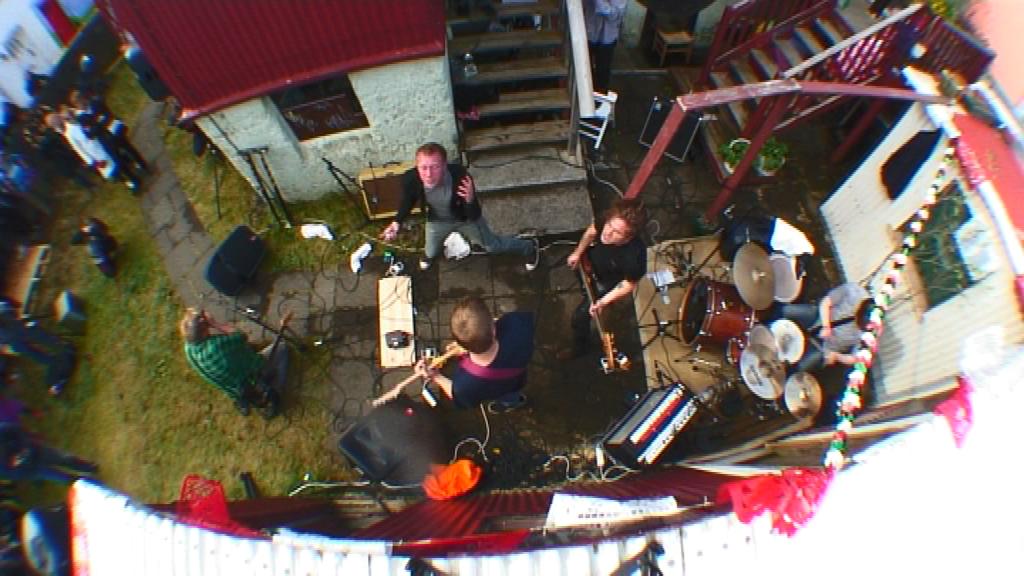 When it started raining, everybody went to hang out in the living room; when a little girl fell over during their hard-rocking performance, the guys from Reykjavík! turned around and looked if she was OK. The whole setting radiated a relaxed ambiance, something you experience when you are at home. Watching it, you feel like a fly on the wall, observing and being part of something intimate, knowing at the same time that those are some of the hottest Icelandic bands at the moment, and you are sharing some time with them.
The unpretentious way of filming helps the feeling that you are attending a family reunion. Shot digitally with mostly hand held cameras, the movie feels like something in between home video and documentary. But this is one of the film’s advantages—it completely matches the successful, but not extravagant and creative, but not trying too hard—aura of the portrayed musicians.
And what do we learn about the Icelandic music scene? Even though the musical style differs from dreamy folk, to heavy rock and electro pop, these musicians share (in addition to the place and time) the same temperament, equipment and sometimes band members: The Icelandic music scene seems like a big happy family.