Outmooring Michael: Maybe I Should have

After the disaster that was Guð blessi Ísland, one could be forgiven for approaching the latest disaster movie with some reprehension. The former’s flaw lay in trying to deal with the whole debacle from three different perspectives: the micro-history one of focusing on various individuals; the macro-history one of talking to bankers to get the big picture; and the conventional history of detailing event by event. It failed in all three. Maybe I Should Have, however, manages to succeed in all three. Partially, at least.
Right from the get-go the director, Gunnar Sigurðsson, presents himself as Icelandic everyman. He participated in the boom, if on a minor level. He bought a car with a breadbasket loan and liked to believe, as most people did, that everything was hunky dory. The crash came as a shock, as did the fact that his loan has now roughly tripled due to the collapse of the króna. While this ploy is somewhat narcissistic, it is nonetheless effective in anchoring the story in a main character. Guð blessi Ísland had three, all interesting, but none of them provided cohesion.

The night before the day after
The film is roughly in three parts. The first part deals with the mindset leading up to the collapse. It goes some way towards showing how virtually everyone, due either to blind admiration or fear, supported the bankers in the run up to the heist of the century. While this is not made explicit, it also shows us that some things have in fact changed. We are more suspicious of the rich now. At least that is something. 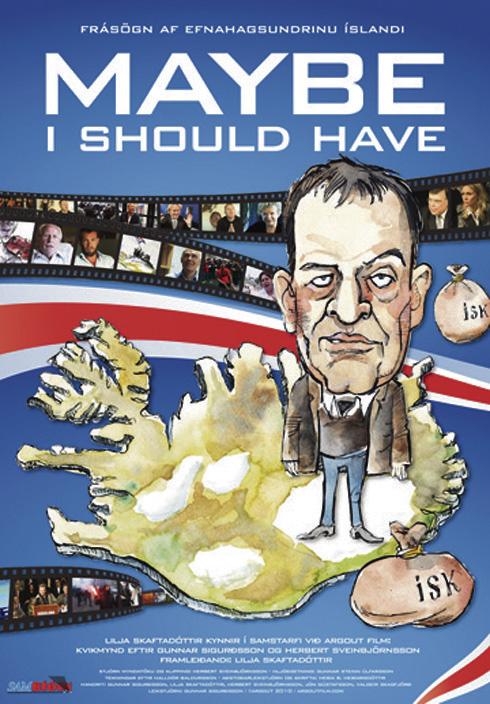 The collapse itself is, unlike the actual event, rather well managed. The constant intercutting of silent film comedians is a bit redundant, since the reactions of our leaders were farcical enough in themselves. The revolution is effectively portrayed by shots that manage to show the main narrative without the aid of a tiresome narrator. Missing, however, is former PM Geir Haarde’s disastrous outing on the BBC referenced in the film’s title.
Gunnar’s subsequent involvement with Borgarahreyfingin, which split up soon after entering parliament, is quickly mentioned without entering into a game of who-did-what.

Money goes to money heaven
In the second part, Gunnar goes all Michael Moore in trying to understand the collapse in layman’s terms, although looking a bit less tired than Mike did in his latest outing. Our man even tries to find the missing money. Much like Morgan Spurlock searching for Osama, you know he won’t succeed, but it would make a great ending if he did.
Like Guð blessi Ísland, he manages to interview Björgólfur Thor, perhaps the main culprit of the heist. Unlike that film, Björgólfur is here allowed to make his point and sounds all the more sinister for it. His notion of the money having gone to money heaven is sure to enter the Icelandic language as a stock phrase. Gunnar then sets off for Tortola, where many of the formerly leading companies of Iceland were registered. The only evidence of them, however, is a mailbox. He also goes to Guernsey, where senior citizens were robbed of their life savings by Iceland’s former leading citizens. This is one of the more important aspects of the film, as we rarely get to see the non-Icelandic victims of the bankers’ excellent adventure turned bogus journey. The most interesting, however, are the empty bank buildings in Luxemburg. These outposts were separated from the mother companies in the days leading up to the collapse. Gunnar makes an educated guess that if money heaven is a place on earth, this is where it is located.

Batman on ice
The last third is most problematic from a narrative viewpoint, as the story itself is essentially over. Much like the Da Vinci Code, the mystery is (partially, at least) solved in the middle rather than at the end. A bit of re-cutting might be in order. Nevertheless, it is this part that raises some of the most interesting points. Gunnar manages to show (partly, at least) how Iceland could be considered one of the least corrupt countries on earth during the boom. To paraphrase a Batman movie: “In a town this bent, who is there to rat to?” Interestingly, said Batman film was (partially) shot in Iceland.
Gunnar even goes so far as to dip into the foundation of the Icelandic republic under American protection and the auspices of the Independence Party. Money that was unearned and came from neither hard work nor exports came flowing in to the country, compliments of the US Army. A company was set up to make sure this stayed in the hands of the families who negotiated the deal and was used to secure their mastery of the island. A culture of political corruption funded with easy money soon developed, leading all the way from 1944 to 2008. Gunnar only implies this, but it would be the basis for a very interesting documentary, as is the money trail to Luxemburg. Hopefully others will pick up where Gunnar left off.