The Message: No Messages

Marcos Zotes is an architect who recently brought one of his latest projects, “YOUR TEXT HERE,” to Reykjavík. He was caught off guard, however, when the Reykjavík district court building refused to grant him permission to use their façade as a display point.

The project is simple. People anonymously submit text messages to a website that Marcos has set up, the messages are then added to a queue and automatically projected for roughly ten seconds each in a spot he has designated. With these short interventions, which typically last only one night, one of Marcos’ primary aims is to activate public spaces.

“The intention is to have people physically interact with their environment,” Marcos said. “Cities are designed in a way so that everything is homogeneous; you are meant to perform in a particular way, to follow a certain pattern… my work challenges this condition.”

More importantly though, the project’s goal is to enable self-expression. These projections serve as a way for people to articulate themselves and make their voices heard. Instead of having their city decorated with banners and product advertisements, residents actually have a say in what is displayed. “The main point is to have people actually express themselves,” Marcos explained. This issue of self-expression, however, is where Marcos encountered a problem. 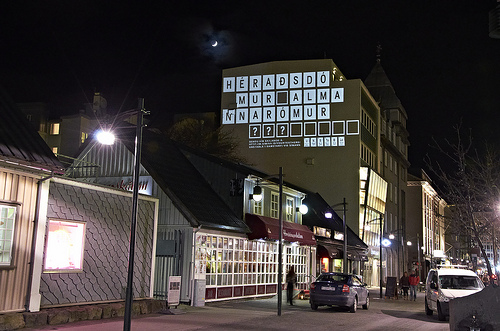 After getting clearance without issue from both City Hall and the Eymundsson bookstore on Austurstræti, the court building on Lækjartorg turned down his request to carry out his project on their building. When the project was explained, the unnerved operator at the court plainly repudiated his request. Owing their negative response to the fact that theirs is a “politically charged building,” they said they could not allow people to use it for their own self-expression. Their message was clear: unless we can be in control of what messages are projected, you are not running your project here.

Having carried out his project successfully in the past without many issues of censorship like these, this reaction from the court building came as a surprise to Marcos.

When he first ran this project as a research student at Columbia University in New York, he was sent on something of a wild goose chase to get permission. “I had a lot of trouble because the institution was somehow afraid of what people would say. But they couldn’t say ‘no, we don’t want you to do it,’ because that’s also very delicate; it’s basically censoring freedom of speech,” Marcos explained. In the end, Marcos was granted provisional permission, able to run his projector until some sort of nasty message appeared, at which point a security guard would shut it down. Ultimately, he decided to black out any messages that might fall into this category, so as to publicly highlight this condition of censorship. 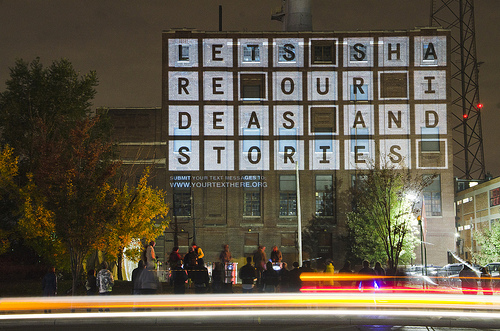 When Marcos ran his project a second time, in Detroit, he had complete freedom. More than a thousand messages were submitted and then displayed on the façade of an old industrial building, and for a two-day period, Marcos just left his projector running. “The great thing was that all of the messages were positive,” Marcos said. ”People came together as a community to share messages about love, wisdom, criticism, or just jokes. It was really kind of a family event.”

While it wasn’t on the centrally located court building that he would’ve preferred, Marcos did get to run his project in Reykjavík. The projections lasted for three nights, one on the City Hall and the other two on the Eymundsson bookstore. Of the roughly 100 messages that were submitted, as had been the case in the past, they were all pleasant and familial.

The kinds of messages Marcos has received in his project only exacerbate his confusion over the court’s ultimatum to censor and filter out what would get displayed. In each of New York, Detroit, and now Reykjavík, the messages received have almost all been positive and created a family-like atmosphere around the building. An argument could certainly be made that messages like, “Never give up,” and, “Make each day your masterpiece,” don’t seem to warrant concern. Seen in this light, the court’s lack of cooperation is even more bizarre. “I don’t know what they’d be afraid of,” Marcos said.

Marcos uses his own design studio, UNSTABLE, to experiment with new media and to be critical of the way public space is used. He focuses primarily on the issue of control over public space and how to go beyond its limits. The layers of control over public space, Marcos expressed, limit its potential. These conditions are what Marcos had hoped to challenge with “YOUR TEXT HERE,” with his use of the court building’s façade. The court, however, obviously didn’t empathise with Marcos’ objectives.

“I wasn’t surprised to hear Columbia’s answer because it’s a private institution and they want to preserve this image. But we’re in the City of Reykjavík, this is a public place,” Marcos said. “This brings up the issue of censorship again in a city, and even with the court building, which is supposed to be a public institution. I wanted to project the messages there and display the voices of local residents, but it turns out that no, you don’t have your say.” 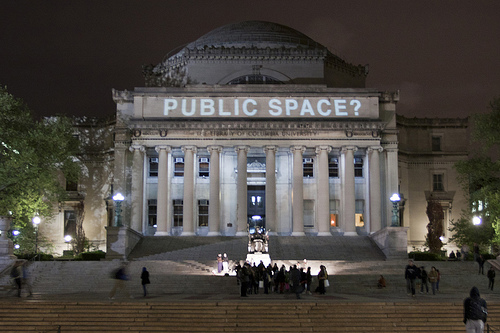 Marcos has no future plans to rerun “YOUR TEXT HERE” in Reykjavík, but does intend to bring the project to other cities. The messages submitted in each of the cities seem to capture something of the personality of the local crowd, which is why Marcos plans to continue to expand the project’s reach. “This is becoming a travelling project, and in different places, the messages are very different. In every case they reflect the spirit of the local community,” he said.

In the end, Marcos thinks the fuss made by the court building seems funny. All this project consists of is casting light onto a building. “It’s not as if it’s graffiti or something permanent, I’m just shining a light for a few seconds,” Marcos explained. He hopes, however, that something as seemingly trivial as casting light may inspire something more. “My interventions are so ephemeral that they obviously can’t instantly change anything in a city,” Marcos emphasized, “but they can certainly generate ideas or raise concerns; that’s the whole point.”