Dance Away Your Lunch Break

DJ Margeir is spinning techno music. The dance floor is full to capacity—the windows are steaming up and with each beat the collective hop of the crowd sends a shudder through the building. Hemmi og Valdi, one of the more laidback bars on Laugavegur, isn’t usually this lively, especially not at half past noon on a Thursday.

The group is a mix of bartenders, middle-aged software developers, French expats, 20-somethings who happened to walk by and curious tourists popping in to take a quick video. The tourists are especially fun to watch—they will more than likely go home thinking Icelanders party at all hours of the day and night.

This is Lunch Beat Reykjavík, hosted by the newly founded Choreography Reykjavík. The bi-weekly dance party is a chance for people to get out of the office, get a cheap meal and dance until they’re sweaty and exhausted.

The origins of lunch beat

Lunch Beat Reykjavík is one branch of a growing, international trend aimed at getting people to take their lunch breaks on the dance floor. Founded in June 2010 by Swede Molly Ränge, the movement has grown from fourteen people getting together in the basement of an office in Stockholm to cities as far spread as Prague, Istanbul, Seoul, Johannesburg and Oakland.

Any organisation can set up a Lunch Beat as long as the events are announced as public events, are hosted without profit and follow the organisation’s ten-rule manifesto. The rules are straightforward: if it’s your first time, you dance. If it’s your second, third or fourth time, you dance. If you’d rather not dance, feel free to eat your lunch somewhere else. There will always be a DJ set, free water and lunch provided and Lunch Beat is “a preferably drug free environment.”

“We have two pretty basic goals: to get people dancing together, which is a different way of interacting with people than sitting around a lunch table, and also to feed people who are hungry,” says Alexander Roberts, a co-founder of Choreography Reykjavík.

In addition to dancing, Lunch Beat Reykjavík offers an all-you-can-eat lunch spread for 350 ISK. Guests can grab muffins, apples, bananas, yogurt, crackers and sandwiches with all the fixings. In keeping with Lunch Beat’s profit-free stipulation, Choreography Reykjavík make back just what they put in. With free use of the venue and the volunteer efforts of the DJs, the group has manage to host the event with no outside funding.

“The idea is that everyone who’s contributing in some way pays nothing but also only gives their time or what they already have available,” Alexander explains. “The space gives their space and we give our time and the dancers give their dancing.” 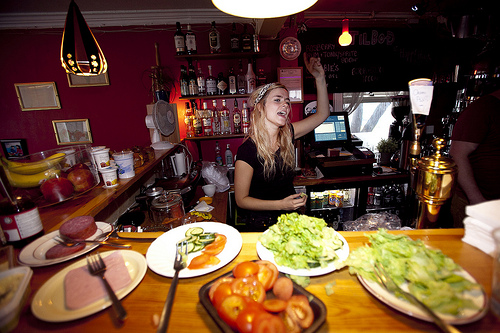 “The idea was, after we met at Reykjavík Dance Festival this year, to get together and do a series of initiatives that would in some way strengthen or expand choreography dance in Iceland,” Alexander says. “So Lunch Beat is one in a number of events and initiatives that we’re going to be doing in the next year.”

In addition to bringing Lunch Beat to Reykjavík, the group has plans to expand the archives and library of Dansverkstæðið and put on Work in Process nights for local choreographers to present incomplete works. Next month they plan on beginning a speaker series.

As for Lunch Beat, the group will continue hosting the event through the end of the year, when they have a special Christmas event planned, and into 2013. And they will continue rotating venues and DJs—other Lunch Beats were held at Bakkus, Hemmi og Valdi, Harpa, the Blue Lagoon and Dansverkstæðið.

“We want to take over different spaces in the city,” Alexander says. “Not even just bars—swimming pools and churches.”