The Brain Behind Zombie Iceland

Journalist, writer, and survivalist Nanna Árnadóttir has just published her first book, called ‘Zombie Iceland.’ As you may have gleaned from the title, it’s a book about zombies in Iceland! But not only is it a wonderfully written fiction to be enjoyed by zombie enthusiasts, but it’s also an artfully written guide to Iceland, making it ideal reading for the tourist that’s looking for an alternative to the Lonely Planet. Just how did Nanna come up with a zombie apoca-lypse travel guide to Iceland? We met up with her after her book launch/zombie party to pick her brain…

What inspired you to write a book about zombies?
As a lifelong zombie fanatic, I’ve spent many hours mapping out how to survive a zombie apocalypse. Every respectable zombie aficionado has. Inspira-tion for the book however came about when I was running down Ægisíða. I was getting in shape for the zombie apocalypse—no lie, this was my reason-ing—and I imagined I was being chased by zombies in order to cope with my overwhelming desire to stop moving, lay down on the pavement and eat some ice cream. That’s where the first chapter came from, Barbara running away from zombies on Ægisíða. I had intended it as a short story, but then I just kept going and going.

So you’ve been preparing for a zombie apocalypse?
Well, you know what they say, “Some people worry, others prepare.” I saw that on a website that sells underground bunkers. My dad and I were having a look but he decided against it. He was like “If we put a bunker in the backyard now, everyone will see and come to us when shit hits the fan. We only have so many guns and food reserves Nanna, we have to be practical.” Oh man, I’ve said too much. He’s going to be really mad at me because now everyone will know that we have food reserves and they’ll come to our house if there’s ever any trouble!

You have wonderful footnotes explaining Icelandic things. How did you come up with that idea?
They came about because as I was writing in English I realised I would have next to no market in Iceland. So I started writing it for my friends abroad and then I realised that they wouldn’t know what “Ora baunir” were or where to go to an English AA meeting in Iceland, so I started adding footnotes and it ended up being an informative tourist book as well as a novel and possibly an elaborate self indulgent fantasy.

And then there’s the zombie apocalypse track list featuring Icelandic musicians. Are they integral to the plot at each stage?
The idea is that yeah, the music narrates the novel in its own way. To begin with it hadn’t occurred to me that the playlist should be exclusively Icelandic music. Really it was my friend Matti’s idea. He said “Hey if this is about educating people on Iceland why not introduce them to Icelandic music too and not just Björk and Sigur Rós but talented, fairly unknown acts.” And it just clicked. What a great way to shed light on such an industrious part of our culture.

Should the reader play them while reading?
Yes, on pain of death by the undead!

I jest, I jest. That would be great and in an ideal world, a reader would do that, especially since we’ve done everything we can to make it easy and free by cooperating with gogoyoko.com.

There are some wonderful characters in your book. Are they based on real people? Did you know a boy who collected farts in jars?
I have an obsession with jars. I’m playing around with ideas for a new book and now I’m obsessed with the idea of a rickety old woman who disconnects from society and begins to collect strands of her hair into jars then creates this bedtime ritual around smelling the hair jars. I have a fetish for writing about people who are strange but not aggressive, like Skúli the Ice Cream guy and Georg, the fart collector. But to answer your question, no I don’t know a boy who collected farts in jars. Although it seems like something a young boy would do, don’t you think?

Uhmm …
I digress… the characters. Barbara is everything I wish I was and try to be. Brave, tough and calm under pressure and Lóa is the little voice in my head that I never show because then I would be completely ostracised from society and it’s hard enough for nerds already.

Zombie movies like ‘Dawn of the Dead,’ which takes place in a shopping mall and serves as a critique on consumerism, often carry messages about our society. Given the Kreppa and all of the anger here, are you sending any kind of message in Zombie Iceland? Are Icelanders becoming zombies?
That’s a hard question. If I say yes, Icelanders are going to be mad at me for saying so and I can’t help but think that in a lot of ways Icelanders have dealt brilliantly with the aftermath of 2008. People are growing their own food, making their own clothes, spending more time with family and friends. People are still fat, and higher education and healthcare are still essentially free. So we’re doing well.

It’s hard not to be critical when the conservative party, which was a large part of what drove us into this mess to begin with, are gaining popularity and power again. Do my countrymen have the memory of a gold fish? It baffles me.

If there is any kind of message in my book though it’s in the way that the zombie outbreak begins. In the book, Iceland is building yet another, com-pletely unnecessary and exploitative power plant, wrecking some beautiful part of our country when there’s an explosion at the construction site and the zombie virus spreads. So in a way I’m sending a “stop fucking with our nature” message. I’m not even a die-hard nature nut, I like being inside where I have easy access to a toilet. But I know that what we have in Iceland is special and deserves to be treated with dignity and sacrificing our countryside to build plants to produce energy we don’t need is just plain disrespectful.

In case of a zombie apocalypse, the emergency number in Iceland is 112.

Ten Things To Do in The Event of a Zombie Apocalypse 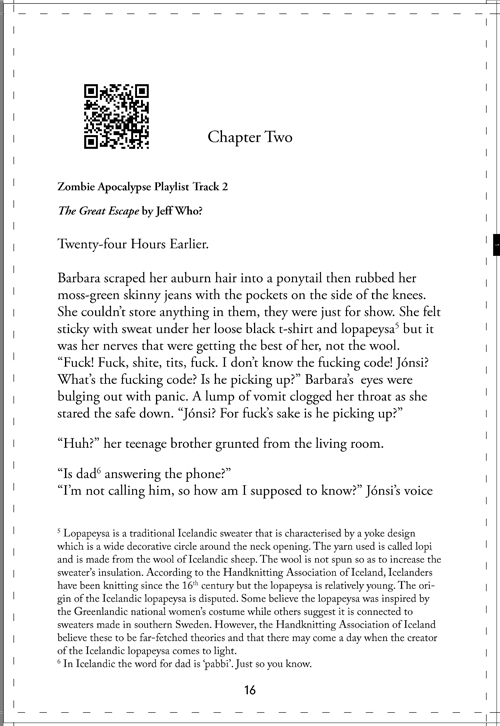