Bus 51 To Hveragerði – An Exciting New Option In Travel

Since the 2nd of January, the city bus company Strætó has provided the towns of Hveragerði and Selfoss with a regular bus service to Reykjavík. The bus service costs 840 ISK for adult single, but if you buy an 11 ticket pass it costs 2.500 ISK, reducing a single fare to 682 ISK.

In the past, if tourists or townspeople wanted to travel to and from Hveragerði, they needed to drive or use the BSÍ terminal whose service is not as regular and more expensive. Thus, this new service will hopefully save travellers money and bring greater access to this very intriguing region. The bus services have been divided into 4 zones and priced according to the distance of each destination from Reykjavík. Hveragerði, which is situated 45 km southeast of Reykjavik, will be in the 3rd zone travelling on bus number 51. If you were planning on commuting it would be advisable to buy a monthly green pass or a 3 monthly red pass to reduce expenses.

Granted, the prospect of a new bus route does not seem to stimulate over joy in the vast population. However, the town is notably one of the must see destinations whilst visiting the country if interested in geothermal activity.

The geothermal hot springs within the steam valley powers a substantial amount of greenhouses, which helps in sustaining a major proportion of the food produced in Iceland. In the summer months the productivity of the greenhouses increases, cultivating a fantastic range of summer flowers. It is a somewhat of an Icelandic tradition to visit Hveragerði to buy a bouquet in the season. 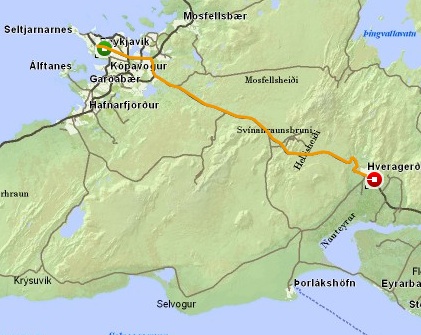 Hiking tours to Reykjafjall Mountain are also offered in the peak season of tourism. Those bring you to the hot springs in the mountainous area. Off-season it is still possible to visit the walks and encounter the hot springs. One word of warning, though, is that if you are inexperienced plan the walk in advance, noting where you can bathe, what to wear and which provisions to take. As we learned, off-season can be far more dangerous.

We took the red stick guide path to Reykjadalur (smoke valley) just north of Hveragerði. At the end of the path is the only part of the river permitted to bathe in, for the cold and warm mountain streams cross at this point, allowing for the cooling of the volcanic water.

If not informed or experienced, you might expect to be able to bathe in any large spring. The warning signs are very sparingly placed and there were no directional arrows to guide you correctly to the next one. We only saw one sigh warning of 100 degree water temperature while on the mountain path, which makes it difficult to predict the position of the next one and finding one’s way around in general. Overall there was a feeling that these paths should be more efficiently marked.

With no experience of hiking, and with little anticipation of jumping over streams and venturing in mud on a hike path, we were ill prepared and underestimated the duration of the trip. When we began to walk back it was becoming dark and we could no longer see any of the red sticks. Slowly, we found our way back but knowing there were hot springs hidden in the darkness, it was just plain fortunate that nothing terrible happened.

A new 51-bus route to the southern towns is exciting news, so take advantage of the service and if you plan on hiking unsupervised, remember to be safe and plan ahead.