Mývatn (‘For You Americans’ And Other Tourists)

One of the first stories our tour guide Logi tells us as we leave the Akureyri airport is about the 1965 and 1967 NASA training missions at Mývatn. Located about an hour outside of Akureyri, Mývatn’s barren and rocky landscapes were thought to be the closest thing to the moon. At least, that was the general consensus. Our guide, however, is convinced it was the eccentric nature of the local people who would have best prepared the astronauts for possible moon men.

He’s joking, I think. Then again, it’s too early in the morning to tell, and if it is a joke, no one laughs. As we drive further, Logi begins a running commentary on the area, weaving in the history and mythology of Iceland to fill the awkward silence left by our rag tag group of tourists—four Canadian guys, a young Japanese woman, a middle-aged English couple, a Grapevine photographer and me, the “American.” 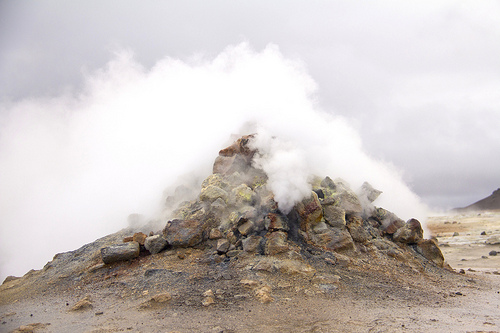 The real story of Santa Claus

As we look through the window of our van, each moment is photo-worthy. Slowly we trade the quaint, brightly coloured houses of Akureyri for sprawling fields of grass littered with small white dots. Two weeks after an unseasonably early snowstorm killed thousands of sheep in the area, the survivors graze here freely, which you can see and smell from all directions.

Soon we’re near the pseudocraters, blackened concave holes in the hills bordering Lake Mývatn. We learn that the lake is only four metres deep, or two basketball players, as Logi explains to those of us not on the metric system. The name translates to “midge lake,” due to the large number of biting flies that hang out here in the summer.

In mid-September, however, it’s too cold for flies. And while the gloomy grey sky spares us from biting flies, it lacked the explosive colours of the maze-like forest of Dimmuborgir, formed on the cooled remains of an ancient volcanic eruption.

Full of seafood soup and rye bread, we follow Logi in a single file line through long iron gate at the park entrance.

This, he tells us, is the sort of place where adventurous tourists get lost, and it’s easy to see why.

Even in daylight one fiery red shrub looks like the next one. Each winding path lined with blueberry bushes looks like it could lead back to the entrance. Logi points out small landmarks, like the crack where the Eurasian and North American plates meet, or a rock face that resembles Homer Simpson.

No trip into Icelandic nature is complete without a conversation about elves and trolls, and Logi takes this time to tell us “the real story” of Santa Claus. Unlike “you Americans and your Coca-Cola Santa Claus,” Logi says, Iceland actually has 13 Santa Clauses, each named after some naughty act. As we pass by brightly coloured shrubs and blueberry bushes, we learn about Door-Slammer and Skyr-Stealer and their horrifying troll mother.

At one point we reach a crossroads in the park where a person could supposedly become rich if they sat there on New Year’s Eve and ignored any elves who walked by. I tried to imagine the park in winter, with four dim hours of sunlight casting shadows on dead shrubs, and decided I wouldn’t be back to prove that legend. 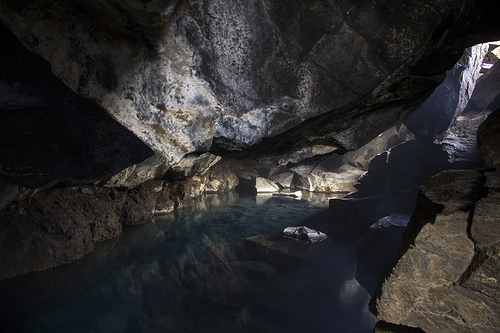 Primordial soup
“If you’re smart, you’ll figure out what to do with these,” Logi says as he hands each of us two plastic bags. We’re approaching the Námafjall hot springs, which sound much cleaner than they actually are. The bags are to protect our shoes from the tan, sulphur-rich coloured mud covering the entire area.

Steam rises from the earth and only the designated paths are safe to walk on. At the end of one path is a tall pile of rocks covering a natural steam vent. It’s easy to imagine this as a prehistoric land—young, hot and unstable. Spread throughout the area are giant “mud pots,” metre wide craters filled with boiling murky mud. For me, at least, the plastic bags didn’t help, and I was glad to get a chance to clean up at our last stop, the Mývatn nature baths.

As we made our way back to Akureyri our conversation (because by now it really had become a conversation) shifted away from troll mothers and tenth century Swedish princes to Iceland’s social welfare, women’s rights and the environmental legislation. And suddenly it seems as if Logi’s ramblings had a point. He told us about Iceland’s history, guided us through the present and left us at the airport thinking about what it might be in the future.

The Lake Mývatn day tour is offered by Air Iceland. Book the trip at www.airiceland.is.

In Hot Water: Switching Off From The World At Krauma Spa

Around The World In A Day: Experience Iceland’s Lava—From The Earth To The Sea

Postcards From The Volcano

by The Reykjavík Grapevine 12:00 pm