Come And Meet The Members Of The Brand

After being hailed as the world’s radical wunderkind for a few years, Iceland left observers perplexed when the parties evidently responsible for its failed neoliberal experiment were voted back in 2013. Who or what runs this shop, really?
You “want to move outside the herd and be independent” because you are “different from the ‘ordinary’ tourist.” You “have above average education” and you “have above average income,” says the Icelandic Tourist Industry Association’s report from last year, defining their target group, ‘the enlightened tourist.’ And boy, are you targeted.
Since 2010, the local population has been thoroughly informed about the importance of proper social media utilisation. In its 2012 annual report, the national branding bureau known as Promote Iceland states that the general public is being ‘harvested’ for this purpose. That year, Promote Iceland also ‘assisted’ some 600 foreign journalists in organising their visits to the country. Journalists and bloggers coming specifically for events sponsored by Promote Iceland wrote 1,400 articles, including pieces in The New York Times, Huffington Post, The Guardian and so on. Sponsored events included music festivals, food festivals, dance, theatre and design festivals. And a marathon.
Meanwhile, a few Hollywood film productions were funded directly through Iceland’s state budget, using Tom Cruise, Ben Stiller and Ridley Scott and their fine productions for the promotion of Icelandic landscapes. If no such subtle methods of nation-branding get to you, of course some good old advertising is also involved.
Bad breath, meet white teeth
In late 2007, in response to what was locally perceived as an image-crisis, mainly that some foreigners were sceptical about the growth of Icelandic banks, the Prime Ministry formed a committee on the Image of Iceland. A few months later, in April 2008, the committee published its findings in a report. The report’s main proposal was that various institutes dealing with exports, culture and diplomacy, should be put under the control of one bureau to unify broadcast messages. One correspondent quoted in the report explained that we must “walk in unison and speak with one voice.” The report suggested that institute be called Promote Iceland. Then came October, the boom went bust, and mass protests were followed by a change of government—making the need for image-management plain for all to see. As stated in the report, “future orientation must be long-term, and must not change along with changes in government every few years and the nation must agree on it.”
In 2010, the marketers faced a unique challenge, an unforeseen national branding emergency, as Eyjafjallajökull erupted, disrupting the flight schedules of millions. As if stories of crooked bankers, political incompetence and violent riots were not enough, travellers all over now cursed Iceland for its geo-historically bad breath. Thank god work on Promote Iceland was already well under way. The necessary legislation was hastened and before the eruption was over, Parliament passed the Promote Iceland Law (38-2010). This sputnik institute whipped up the social media-based campaign ‘Inspired by Iceland’ and before anyone knew how to pronounce Eyjafjallajökull, Icelanders appeared on YouTube, dancing to Emiliana Torrini’s “Jungle Drum” in the seemingly eternal sunshine of spotless fun. Post the video, spread the message, officials urged their compatriots: show people everything is alright, invite friends over. And tourism went up. Solid nation-branding, Promote Iceland’s unified message was obviously a winner.
After being hailed as the world’s radical wunderkind for a few years, Iceland left observers perplexed when the parties evidently responsible for its failed neoliberal experiment were voted back in 2013. The right-wing coalition government just published its first annual budget proposals, for 2014. Schools, hospitals, welfare, culture, arts and sciences face the world’s most terrifying euphemism: austerity. One single item in the whole budget, however, is explicitly declared ‘exempt from budget cuts’: Promote Iceland. The law passed through Alþingi without debate in 2010 established an institute funded by taxes, but run by a board majority appointed by the Confederation of Icelandic Employers (CIE). Yes, there is such a thing. And yes, it is what it proclaims to be: the national capitalists’ union. One lobby to rule them all. The confederation negotiates salaries nation-wide. It directly funds research in Bifröst University’s business department. It does all sorts of clever things to secure its members’ interests. And now they have this new central bureau. Obviously, Promote Iceland is not a propaganda ministry. Ministers are elected officials; their policies are debated in public and subject to change. Promote Iceland is something much handier. 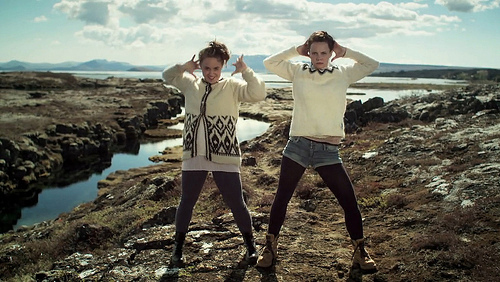 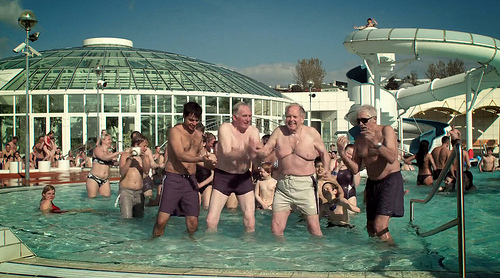 Live happily ever after!
Summarising this article’s hypothesis runs the risk of caricature but let’s do it anyway: In Iceland, the logic of marketing and branding has been permanently institutionalised to minimalise the damage done by democratic processes, against which it currently has the upper hand. Meaning: Promote Iceland runs this shop. Iceland is a billboard. Some still hope that this is a case of double-bluff: that underneath the presently exposed layer of all-encompassing business logic runs another current, the cunning logic of history, a wisdom revealed through the ballot box.
Such a hypothesis would claim that the current coalition was tricked into power, manoeuvred into overbidding the all-too compromising left-wing parties in a blackjack game of socialist promises: we will annul your private debts, PM Sigmundur Davíð promised, because they are unfair. We will fight the evil venture-capitalists and justice will prevail. If the coalition runs out of revolutionary steam or fails to deliver on its socialism, this hypothetical hypothesis would hold; they will be ousted once more. The third option is that the world, including Iceland, is an obscure and chaotic place and there is no underlying logic. And then there is the Prime Minister’s hypothesis. In the opening speech of the current parliamentary session, Sigmundur stated that, so long as the general public works in confident unison towards a shared vision of the future, so long as we do not let ourselves be influenced by ‘extremist ideologues,’ aiming at ‘disintegration and subversion,’ this country can be an exemplar, where “a cohesive and happy people live in safety to the end of their days.” For the sake of brevity, however, this article will make do with one speculative hypothesis at a time.