Morgunblaðið And The American Satanist

Not too many Americans wanted to hear about Amanda Knox as her year long trial played out. Accused of murdering a British flatmate while studying abroad in Perugia, Italy, Knox fascinated Europeans. Based on diary entries, made very public, that indicated she had seven sexual conquests, testimony that indicated she left a vibrator visible in her shared bathroom, and the fact that she kissed her boyfriend after her flatmate was murdered, an Italian prosecutor was able to concoct accusations first of murder by “satanic rite,” then of murdering when a Japanese manga inspired sex game went awry, then a motive for murder based on envy and, of course, finally murder under “the fog of drugs and possibly alcohol.”
The stories told by prosecutor Giuliano Mignini in the Amanda Knox trial are the stuff of legend, built from coarse stereotypes and pornographic fantasies. My guess is Americans couldn’t reconcile European treatment of a seemingly average American girl. We have a hard time assuming that someone is a orgy-loving Satanist based on their possession of a vibrator—that Europeans might see us in this light, all a puff of pot away from slitting throats, is a painful indicator of the our rating as humans on the Euro-scale.
Knox was found guilty of murder, though not of Satanism, this December. With decent access to a range of reporting, it is understandable to me that she was found guilty: yes, her prosecutor played on sexism, gross ignorance, and fear in his storytelling, but there were a couple pieces of evidence that attached doubt to Knox’s innocence. I do not expect juries the world over to stand by the American platitude of innocence until proven guilty—we ourselves rarely live up to it—but the buffoon Mignini has made a painful trial look like a gross misstep of justice.
Painful as it is to see a person of power fail in his office, sensationalizing a tragic death, the Knox trial has given us something very useful: a touchstone from which to evaluate journalistic integrity.
Given sex and Satanism and conjecture, we can see clearly, with this example in the centre the ability of newspapers to report actual facts, whether newspapers reprint conjecture or analyze, whether newspapers present the most pornographic terms are presented as headlines, or whether logic and humanity is applied.
So on December 4, 2009, when an aghast Icelander forwarded me Morgunblaðið’s coverage of Knox, I understood the reaction. The headline of a non-bylined article written for Iceland’s most revered newspaper said simply “Satanistar fá langa dóma” – “Satanists get long sentence.” 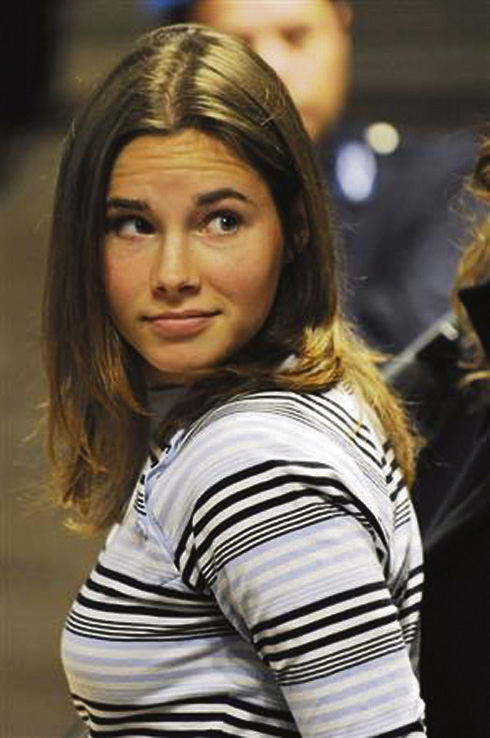 What followed was a brief summary of the sentence Knox received, and a recounting of the prosecutor’s case. The American student molested and slit the throat of an Englishwoman, an “engill,” yes, an “angel.” Sources are referred to in the article, the BBC, Vanity Fair, the Telegraph, but none are quoted. What we need to know is an American Satanist brutally raped then murdered an English angel. That’s the official editorial opinion of Iceland’s most trusted news source.
There are a few points that are particularly striking about this story. The description of Knox as a Satanist is particularly gripping: for the most part, the tone of the article closely mirrors the conservative Rupert Murdoch newspaper The Times of London—except the Times uses facts and quotes. But no newspaper, including the Times, referred to Knox as a Satanist after the prosecutor himself abandoned that line of thinking in 2008.
In the absence of facts, and with adjectives of Satan and angel applied, we are expected to figure out guilt based on, presumably, stereotype. To be fair, Morgunblaðið did not mention sexual history to the degree that English newspapers did. The only fact we can base the tendency toward Satanism or angelicalness on is nationality—is it more likely for an American to be satanic? An Englishwoman to be angelic? This is not the way you typically want your journalism to function.
It is possible that Morgunblaðið simply flubbed a story that didn’t seem important to them. They presented the facts, messed up on a headline, and nobody much cared. If they played up a stereotype that American women are somehow ruthless and lacking in morals, it’s hardly anything new: as I reviewed the article at MBL.is, a banner advertisement of “Sorority Row”, featuring scantily clad American girls and the suggestion of horror, blinked next to the Knox article.
This article, though, flies in the face of two core Icelandic values. I could be wrong, but in my time in Iceland I felt that the country espoused equality among sexes and vigilance against prejudices based on sexuality—the idea that the number of partners a woman might have could compromise her moral fortitude is rejected in Iceland. The notion of a fair trial, and a strong reaction against over-rigorous prosecution, also seemed to me to be central to Icelandic identity. I’ve seen very thorough arguments of evidence in foreign trials of sex offenders in the pages of Morgunblaðið in the past, and successful arguments to bar deportation of tax evaders who received judgments deemed too harsh.
The Icelander who presented me the Morgunblaðið article suggested that Icelandic values are still the same. “What happened to Mogginn? It’s turned into Séð og Heyrt” was her main observation. She had expected the newspaper that represented Icelandic values. She found a tabloid.
Americans aware of the Knox treatment in the European press are quick to call out anti-Americanism. I wouldn’t go nearly so far. I would call out sloppy journalism, which brings to mind the many warnings I once received about a future in Iceland dominated by shoddy journalism. Davíð Oddsson, as Prime Minister, complained via his advisers in 2004 that if media went unregulated, we would see corrupt media along the lines of what passes in Italy. That specific example was sited to me as I attempted to cover Oddsson’s failure to pass a media bill for the Associated Press.
I can’t help but see the irony that Davíð Oddsson, in serving as editor of the once revered Morgunblaðið, has recognized the low promise of his warnings about journalism.