Every year, The Grapevine prints 18 issues that get distributed around Iceland and uploaded to the web. Looking through the last batch, it’s difficult to fathom how we pulled some of them off in time. A lot of late nights were spent at the office. A lot of coffee was consumed. A lot of sleep was lost. It was one hell of a ride. We hope you enjoyed the read! 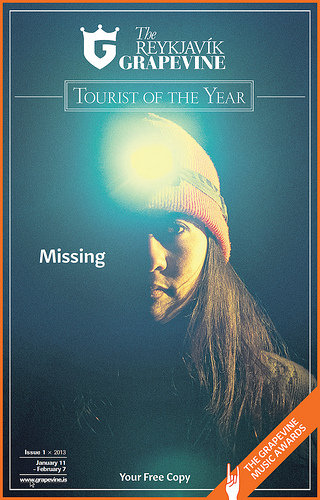 As publications around us invariably honour some kind of “Person of the Year,” we—as the unabashed tourist rag that we are—decided to honour a “Tourist of the Year.” The winner was immediately obvious to us. It was the woman who unknowingly took part in the search for herself after getting “lost” in Iceland’s highlands. The search went on for hours before she realised that she was in fact the missing Asian woman described as 20-30-years-old, 160 cm tall, wearing dark clothing and carrying a small light-coloured handbag. Cue all kinds of clever international headlines about the woman who found herself in Iceland. This issue we also launched our first annual Music Awards, which were a really long time coming.

For our second issue of the year, we planned to finally print a cover story on Iceland’s elusive Jewish community, but a rather big event derailed our plans a day or two before print: The European Free Trade Association (EFTA) ruled in Iceland’s favour in the long-disputed Icesave case. Quickly, we wrote an analysis of what Iceland’s victory meant and, in an attempt to tie this to our feature on the Jewish community, we went with a David and Goliath motif on the cover. Holding Gordon Brown’s bloody, goliath-size head is Iceland’s President Ólafur Ragnar Grímsson, who stood up to the UK (and the Netherlands) by refusing to sign those two Icesave bills (that I’m not going to go into the details of). There was some concern that the illustration by our Hrefna Sigurðardóttir was too graphic, if I recall correctly.

As has become tradition, we once again relinquished control of our third cover of the year to the designers behind the identity of Reykjavík’s annual DesignMarch festival. This year they were graphic designers Ármann Agnarsson and Jónas Valtýsson (yep, they’re the guys on the cover). Inside, we featured a pullout chock full of design-related stuff including our annual Design Awards.

With the upcoming parliamentary election, we decided to feature a massive election guide in our fourth issue. This involved hounding would-be candidates from an unprecedented number of parties—20 at one point!—until they turned in answers to our rather lengthy survey. For our cover, we got heads from all 13 parties to show up for a cover shoot, which photographer Baldur Kristjáns executed wonderfully. A 14th party joined the fray, but was a day late and a dollar short for the shoot. Sorry, Sturla Jónsson.

Given how obsessed Iceland is with the arguably kitschy Eurovision Song Contest, it was about time we featured it on a cover. After some hesitation, this year’s contestant Eyþór Ingi Gunnlaugsson agreed to pose for the cover. As you can see, he’s about to get splashed in the face with water (…okay, you’re going to have to use your imagination), as our hopeful (and nationalistic) island nation of 320,000 fails to win, again. In our interview with Eyþór, he said that Eurovision turns Icelanders into monsters.

For this issue’s feature, author Andri Snær Magnason—who is perhaps best known for his book ‘Dreamland – A Self Help Manual For A Frightened Nation’ and more recently ‘LoveStar’— updated an Icelandic article he wrote three years earlier called, “Í landi hinna klikkuðu karlmanna” (“In the Land of the Mad Men”). It seemed especially timely to be printing it given that the nation had just voted back into power the very parties that were responsible for driving Iceland’s heavy industry agenda. The environmentalist was photographed taking refuge in a moss covered lava field in Reykjanes where there are plans to harness more geothermal energy to power more heavy industry.

We turned 10 this issue! For our birthday cover, we gathered 10 people who have graced Grapevine covers in each of the past 10 years—from Megas in 2003 to Hallgrímur Helgason in 2012. This issue also corresponded nicely with our third annual Bar Guide, for which we inevitably received some angry phone calls. Our biggest mistake this year was to confuse Ob-La-Di Ob-La-Da for a karaoke bar. It is not!

For some reason a water polo player from California who likes strong men decided to intern with us this spring. He walked into the office on his first day completely star struck after having just seen Hafþór Björnsson get into his car in downtown Reykjavík. Of course he was raving about Iceland’s strongest—the world’s third strongest man (yep, we totally knew who he was talking about and didn’t have to Google him). Before he left, our rare Grapevine jock wrote a feature on Hafþór and his bid to return the Strongest Man title to Iceland. Hafþór didn’t end up taking the title this year, but he did score an acting gig, playing “The Mountain” in season four of Game of Thrones.

When our former designer, hacker and self-proclaimed maker of the internet Páll Hilmarsson asked us if we wanted to feature an interview with “Siggi, the hacker,” we didn’t hesitate to say yes. This 21-year-old Icelandic boy had become infamous for two-timing Wikileaks’ Julian Assange as an FBI informant and we were curious to hear his side of the story. Months later, someone from Wikileaks harassed us in the middle of the night at a bar in Reykjavík for giving this controversial character a voice. When it later came out that Siggi was convicted for sexually assaulting a 17-year-old boy, someone else yelled at us some more, claiming ‘real’ magazines would never interview a character like Siggi. Incidentally, Rolling Stone magazine featured an interview with him this month.

The cover of issue 11 may or may not still be around on a wall in Vesturbær (it was at the time of writing). In the span of a few days, street artist Sara Riel created our cover, text and tags and all, which we then photographed and printed. The image is one she made for múm’s ‘Toothwheels,’ the awesome first single off their 2013 LP, and the full size cover mural idea is borrowed from Philadelphia’s wonderful Kurt Vile. The cover corresponded nicely with the feature article by Kirsten O’Brien, which covers the City’s war on graffiti and the surrounding debate, along with interviews with múm and Sara Riel herself.

As a number of popular music venues in town closed to make room for new hotels to accommodate the ever-increasing number of tourists, we thought it was high time to explore the pros and cons of this new reality. The cover image depicts a fictitious skyline with, yes, a few extra skyscrapers and hotels, but just imagine if we let the tourism industry grow as recklessly as we did the financial industry…

In anticipation of Emiliana Torrini’s new album, ‘Tookah,’ Editor-in-Chief Haukur S. Magnússon met with her to discuss her music, her lyrics, her life and times. Icelandophiles otherwise unacquainted with Emiliana’s music have likely heard her track “Jungle Drum,” which featured in an Inspired by Iceland video that went viral in 2010.

Following the release of Ragnar Axelsson’s new book ‘Behind The Mountains,’ we thought we’d interview the man—better known as Rax—whose photos have featured prominently in the daily newspaper Morgunblaðið over the last few decades. Our summer journalist, Ingibjörg Björnsdóttir, chatted with him about his passion for documenting Icelandic nature and remote places in the Arctic, which he fears future generations won’t be able to enjoy.

This issue marked the five-year anniversary of the financial crisis. On the cover we tried to show a pre and post-crash man with the message, “the more things change, the more they stay the same.” We got a number of people, including former Prime Minister Jóhanna Sigurðardóttir, to reflect on the times. Jóhanna’s contribution was her first public statement since the spring elections. We thought that was pretty neat.

Our annual Iceland Airwaves issue came out with three covers this year. We picked three musicians and asked them each to pick another musician who they were excited about, and then we photographed them together at various Airwaves venues. As usual, we made a big pullout featuring all kinds of material related to the festival, including bigger interviews with the cover stars: composer Daníel Bjarnason (pictured with Margrét Rán Magnúsdóttir of Vök), Jófríður Ákadóttir of Samaris (pictured with Arnljótur Sigurðsson of Ojba Rasta) and Högni Egilsson of Hjaltalín (pictured with Steinunn Harðardóttir as DJ Flugvél og Geimskip).

Post-Airwaves, we thought it made sense to make a “Hangover Issue.” The feature article itself is about drug and alcohol rehab in Iceland, which is pretty fascinating from an American’s perspective. In Iceland, it seems that everyone has either gone or knows somebody who has gone to inpatient drug or alcohol treatment. In fact, Iceland has the per capita record with 10% of all living males over the age of 15 having sought such treatment. How that came to be is a pretty remarkable story. After this issue came out, we received a phone call from an angry tour operator who was disgusted with our cover and the fact that we were making Icelanders out to be a bunch of alcoholics. That was probably the last really angry person who yelled at us last year.

Phew, the last issue of year! This feature was born out of a column written by Árni Árnason, an Icelandic expat living in London who recently discovered that most of Iceland’s classic Christmas songs had former lives as Italian love songs. The idea grew, the column was scrapped and Árni wound up doing an extensive interview with the legendary pop star responsible for this and a lot more. His name is Björgvin Halldórsson and that’s him on the cover with the pasta and red wine.