With Iceland Airwaves now over, maybe you’ve just returned home from your first trip to Iceland and you’re trying to remember that one place that you saw that one great band, or maybe you’re just jonesing for another glimpse of our damp, charming little city. Lucky you! Iceland has finally been Google Street View mapped, so now you can vicariously revisit all those hip spots you’ve been without having to suffer the in-person beer prices.
With all the tourists gone, you might think that Iceland would feel a bit empty, but not so: at 325,010 people and counting, Iceland’s population is on the increase, with a thousand babies born in the third quarter of 2013 alone. And the capital is adding to its numbers as well—following the annual lighting of her Peace Tower on the island of Viðey, Yoko Ono was named an honorary citizen of Reykjavík, only the fifth person to be granted the title since its inception in 1961.

Despite the tourism boom bringing in lots of cash, Icelanders have been seeking more creative—and nefarious—ways to save, and make a little extra cash. Take, for instance, the news that an unknown member of the men’s 2008 Olympic handball team put his silver medal up for sale at a collector’s shop in Reykjavík. Or the story of a rather optimistic fellow in Suðurnes who tried to convince police to help him recover the 5000 ISK he lost in a failed drug deal. Following the incident, police confirmed that they do not assist with drug deal refunds.
Meanwhile, a would-be Jón in Reykjavík sued a teenage girl for taking his money, but not having sex with him. After posing as a prostitute, the girl took 20,000 ISK from the man and then ran off. Believing himself to have been “defrauded,” the man took her to court. The charges against the young woman were dropped, and the man was later charged with solicitation.
There also appears to be an epidemic of employers who don’t understand how wages work: owners of the Bauhaus hardware store are asking employees to pay them, claiming that salaries have been inadvertently overpaid. And in the West Fjords village of Bolungarvík, 20 Polish factory employees have accused their foreman of charging them 1000 Euros for the privilege of working there.

News like this might make you lose a little faith, and so seems to be the case for many Icelanders. Recent data collected by Statistics Iceland shows that about 10,000 Icelanders have de-registered from the Evangelical Lutheran Church of Iceland in the last three years. As a further sign of distances possibly growing between Iceland’s church and state, the Reykjavík City Council may propose that parliament reconsider the government’s “anachronistic” Christian Fund, which requires that municipalities provide free land for the building of Christian churches. An adjustment to this law would likely be welcomed by most, as 71% of Icelanders reported that they do not approve free plots of government land being provided for houses of worship. 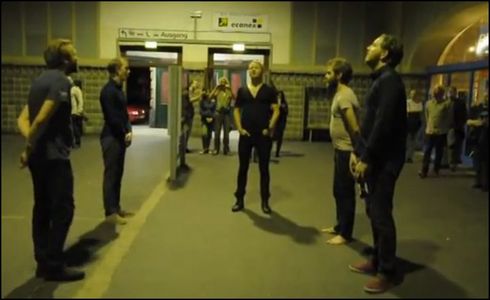 But before you worry that we’ve gone fully heathen up here, don’t forget Iceland’s most recent viral sensation: the vocal group Árstíðir (Seasons) recently gave an impromptu acapella performance of the hymn “Heyr himna smiður” (‘Listen, Heavenly Creator’) in a train station in Wuppertal, Germany. The video has gotten over 849,704 views on YouTube as of this writing. Keep your chins up out there!