What follows is a timeline of the banking collapse in Iceland from the early ‘90s and to the present day. It accompanies the article The Collapse And Beyond.
1991
April 30: The Independence Party and Social Democratic Party form a coalition government headed by Prime Minister Davíð Oddson.
1993
January 12: Icelandic parliament signs a bill to join the European Economic Area.
1995
April 23: The Independence Party and Progressive Party form a coalition government, again headed by PM Davíð Oddson. One of the government’s stated goals is to privatise public companies that could compete on the open market, including the then nationally-owned banks.
1997
May 22: Icelandic government approves a bill to start privatising Landsbanki bank and Búnaðarbanki bank (later Kaupþing bank, now Arion bank). The government wanted to attract numerous foreign investors and banks to buy shares, but in the end they showed no interest.
1999 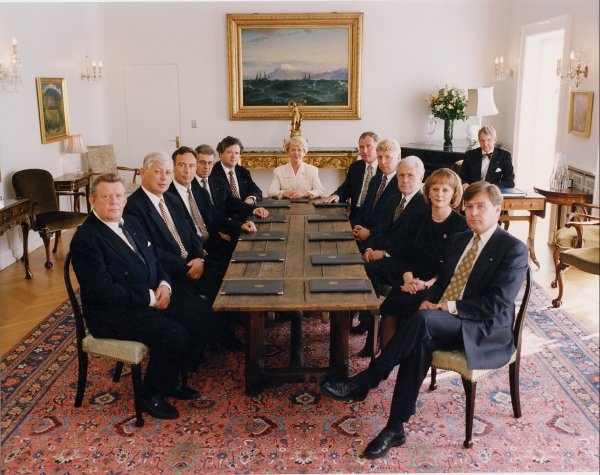 May 28: The Independence Party and Progressive Party form a coalition government, again under PM Davíð Oddson’s leadership.
2002
September 10: Steingrímur Ari Arason resigns from the privatisation board because of poor working methods. The committee had ignored favourable offers for the banks in lieu of political ones and core concepts such as decentralised ownership were ignored.
October 19: The Icelandic State privatises Landsbanki bank, selling its share to the company Samson for 12.3 billion ISK. Samson consisted of, amongst others, Björgólfur Guðmundsson and his son Björgólfur Thor Björgólfsson, who would later become Icelandic superstars of the economic boom.
2003
January 16: The Icelandic State privatises Búnaðarbanki bank, selling its share to investor group S-hópur for 11.9 billion ISK. The group comprised of several different companies, many of whom had complicated ownership links with each other.
May 23: The Independence Party and Progressive Party are elected yet again into office with Davíð Oddson serving as PM for two years. This government lowered corporate tax down to 16%, property tax was abolished, income tax was lowered, and inheritance tax was greatly reduced.
2004
September 15: Davíð Oddson, head of the Independence Party, and Halldór Ásgrímsson, head of the Progressive Party, swap ministries, with Davíð becoming minister of foreign affairs and Halldór becoming prime minister.
2005
January 1: Björgólfur Guðmundsson is given the Order of the Falcon honours for his contribution to Icelandic business and culture.
September 27: Davíð Oddson resigns as minister and Independence Party chair, and is appointed the following month as bank manager of the Central Bank of Iceland by PM Halldór Ásgrímsson. 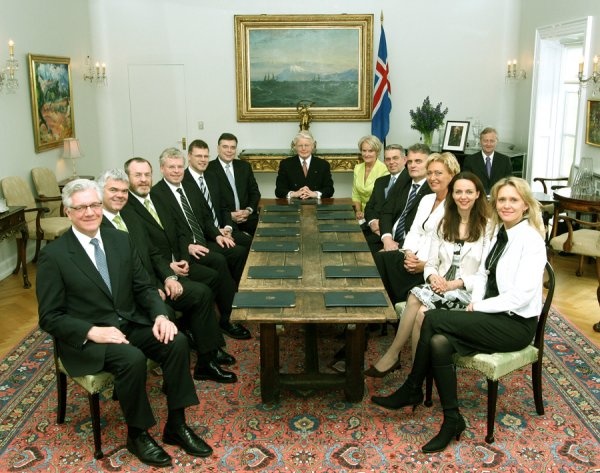 2006
June 15: New Independence Party Chair Geir H. Haarde takes over as PM from Halldór Ásgrímsson.
October 10: Landsbanki bank introduces the Icesave special savings account in the UK, and later in the Netherlands. It promised very high interest rates and was universally praised up until the economic collapse by politicians and President Ólafur Ragnar Grímsson.
November 6: Björgólfur Guðmundsson makes a 75 million GBP bid for English West Ham United football club and becomes owner with Eggert Magnússon.
2007
May 24: The Independence Party forms a coalition government with the Social Democratic Alliance, led by PM Geir H. Haarde.
2008
July 8: Sigurjón Þ. Árnason, bank manager of Landsbanki bank, refutes claims by the bank manager of Dutch Rabobank, Bert Heemskert that Landsbanki is going to go under in the near future. Icelandic experts agree with Sigurjón, claiming that Heemskert is simply afraid of healthy competition.
September 29: Following a severe shortage of liquid assets in Glitnir bank (now Íslandsbanki bank), the Icelandic state nationalises the bank. The Icelandic currency is greatly devalued.
October 6: Parliament passes an emergency measures bill granting the Icelandic Financial Supervisory Authority increased powers to nationalise and overtake financial institutions. PM Geir H. Haarde addresses nation on the economic crisis, famously uttering the words, “God bless Iceland.”
October 7: Landsbanki bank is nationalised following shortage of liquid assets after the freezing of international Icesave accounts.
October 8: Central Bank Manager Davíð Oddson appears on the Kastljós talk show and states that Icelandic deposits will be repaid in full, but irresponsible foreign investor’s claims will not be guaranteed. Following the announcement, the UK parliament uses its anti-terrorism legislation against Iceland and freezes all of its bank assets.
October 9: Kaupþing bank (now Arion bank) is nationalised.
October 10: UK Prime Minister Gordon Brown condemns Iceland’s failure to guarantee British investors’ deposits with Icesave accounts.
October 11: Weekly Saturday protest rallies start outside of parliament. Despite repeatedly poor weather, the peaceful protests are generally well-attended.
November 20: The IMF agrees to give Iceland a 2.1 billion USD advanced loan. Conditions of the loan include working towards fiscal consolidation and reviving the domestic loans market.
November 27: Capital controls are approved by parliament, limiting the outflow of foreign currency.
December 8: Thirty people try to get to the viewing bench of parliament and deliver an oral protest, but are stopped by security guards. Nine of the activists are identified and charged for invasion of parliament. They are then referred to as the “Reykjavík Nine.”
December 17: Parliament forms a Special Investigative Commission to “investigate and analyse the processes leading to the collapse of the three main banks in Iceland.” 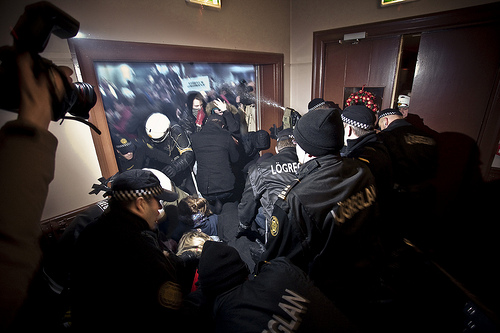 December 31: Activists protest outside Hótel Borg as the political party chairs gather for a televised reflection on the previous year over champagne and fancy food, which some deemed immoral as some people struggled to afford basic necessities. Protesters manage to sever some of the transmission wires and get into scuffle with staff before being dispersed by police with pepper spray.
2009
January 13: Akranes District Commissioner Ólafur Þór Hauksson is appointed as Special Prosecutor. His job is to “investigate suspicions of criminal actions in the period preceding, in connection with or in the wake of the collapse of the Icelandic banks.”
January 20: Thousands take to the streets and parliament with pots and pans. Police spend all day trying to disperse the crowd.
January 21: The Reykjavík chapter of the Social Democratic Alliance approves a motion that urges the main party to dissolve and form a new government until elections can be held. Protesters rage outside the meeting, burning flags. Later that night police employ tear gas against protesters for the first time in fifty years.
January 23: Prime Minister Geir H. Haarde steps down as chair of the Independence Party citing a malignant throat tumour.
January 26: Geir H. Haarde tenders a government resignation to President Ólafur Ragnar Grímsson. Elections are called for in April and a left-wing minority government is formed between the Social Democratic Alliance and the Left-Green Movement with support from the Progressive Party.
March 10: Norwegian/French Eva Joly is hired as an adviser to Iceland’s Special Prosecutor to help investigate possible criminal acts that may have triggered the banking crisis. Joly had made a career out of battling corruption, previously convicting numerous people from France’s leading oil company Elf Aquitaine for fraud.
March 29: The Icelandic InDefence group publishes a statement signed by 83,000 people that Icelanders are not, in fact, terrorists. 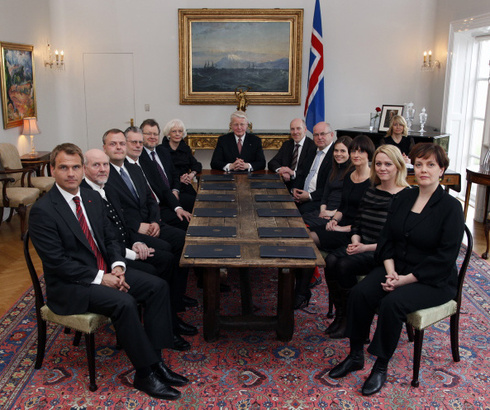 April 25: The left-wing minority government wins a majority vote in the elections with 34 out of 63 parliamentary seats.
July 31: Björgólfur Guðmundsson, one of the former owners of Landsbanki, willingly declares himself bankrupt. His son, Björgólfur Thor, made a formal apology to Icelanders, but remained in London.
August 28: The first Icesave bill is approved by parliament, but is rejected by the British and Dutch governments.
December 30: The second Icesave bill is narrowly approved by parliament, with 33 votes against 30.
2010
January 2: President Ólafur Ragnar Grímsson is handed a petition from the InDefence group signed by 56,089 individuals asking him not to sign the second Icesave bill.
January 5: President Ólafur Ragnar Grímsson refuses to sign the Icesave bill, passing it to referendum.
March 6: In the referendum, voters refuse to approve the Icesave bill. A new negotiating committee is formed.
April 12: Parliament’s Special Investigative Commission publishes its findings, condemning the “flawed process of privatization,” where banks were “allowed to grow far beyond the ability to supervise them properly” and public administrators as well as politicians “failed to respect their primary obligations.” They found several people guilty of negligence, and banks not active in honouring corporate social responsibility.
2011
February 16: The third Icesave bill is passed through parliament with 44 votes against 16.
February 18: President Ólafur Ragnar Grímsson refuses again to sign the Icesave law.
April 9: Voters refuse for the second time to approve the Icesave bill.
2012
June 30: President Ólafur Ragnar Grímsson is re-elected despite criticism of having heavily cheerleaded the Icelandic banksters.
2013
January 28: European Free Trade Association Court clears Iceland of charges of not honouring deposit-guarantee schemes in the Icesave accounts.
May 23: After a tumultuous four years of government, including a very close vote of no confidence, the Social Democratic Alliance and Left-Green Alliance suffer a defeat in national elections. The Progressive Party and Independence Parties form a new coalition government. Sigmundur Davíð Gunnlaugsson becomes prime minister.