Something happened a few years back with fashion in Iceland. Maybe it was part of the creative tsunami following the economic collapse or maybe it was the result of all of the art attention that Iceland has been getting over the years. For whatever reason, studios suddenly started popping up all around and Icelanders were bombarded with headlines about fashion designers making it big at all those fashion extravaganzas around the globe. Suddenly we had a vibrant fashion scene.
But the scene was rowdy and untamed. Rather than boasting collections, designers were item driven and their main platform was on the sidelines at a music festival or an addition to some other happening. What I’m getting at is that it never had a home. And being an orphan results in a lack of roots and a lack of discipline. It was in dire need of a place to call home.

BIRTH OF A REALM
In 2009, a group of five fashion aficionados sat down family-style to discuss a mission: to create a fashion week-like event in Reykjavík. And so the Reykjavík Fashion Festival was born. The festival’s director Þórey Eva describes its birth as a result of mixed feelings about how Icelandic fashion was being represented and branded abroad. “To most industry people, it was simply put unacceptable,” she explains.
But it’s one thing to create a fashion festival and another thing to actually execute it. Iceland’s fashion gang wasn’t used to preparing a collection and creating a brand. Or at least not to the extent required for this kind of show. “It’s been a constant learning process; we are learning by doing,” Þórey says. “A fashion festival is kind of like making a movie if you will, it’s a collective process. Everything has to come together—the clothes, hair & make up, models, music and set design.”

CELEBRATING ITS FOURTH EDITION
This year’s edition will be the biggest one yet in terms of attendance, welcoming several highly esteemed foreign journalists including photographer Roxanne Lowit. Her posers have ranged from Salvador Dalí to Scarlett Johansson so the models skittering on the catwalk will certainly be in good company if they cross Roxanne’s lens.
However fancy and chic the industry people will be, it’s still ultimately about the designers and their collections. This year’s festival has selected a nice bunch of captivating designers, a whole seven of them to be precise. Some are novices at RFF, but most have gone through this process at least once before. We sat down with a couple of them and uncloaked their views on this exciting hullabaloo that is to take place. 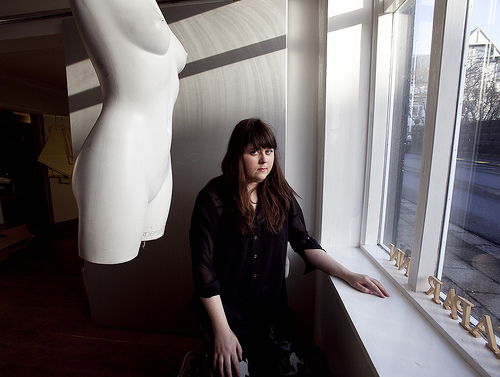 A Dark Pragmatist:
REBEKKA REY
How does Reykjavík’s fashion scene compare to the one in Los Angeles?
It’s completely different. Everything is much bigger in LA. You’re so isolated here in Iceland. It manifests especially in material-supply, but you have to adjust to what’s available rather than doing anything you can imagine.
What do you think of RFF?
I don’t want be a drag, but there are a lot of things lacking with this festival, as there is in the industry here. But it’s good to be able to maintain restraint and RFF makes designers think about making their collection. Icelandic designers are used to designing a nice dress and then producing it in seven colours and different fabrics and then trying to sell as many as you can.
When you design a collection you think about the whole picture, about building a brand. You constantly have to ask yourself question like, “what do I stand for? Which model should I use? What is my demography?” You have to think about the whole, like creating a package. It’s like conducting a symphony. That is what RFF has brought to the scene, which wasn’t there before.
Tell me about your collection this year.
The REY pallet is pretty dark. I like asymmetry. I choose fabrics that I find beautiful. I know it’s a cliché, but my design is never the most glamorous dress in the closet, but it’s probably the garment you’ll pull out most often. It’s that timeless piece that you choose when you think you’ll be overdressed in that other dress.
I studied a lot of dance costumes by Isadora Duncan, for instance, when preparing my collection. The dance costumes inspired me because of their flexibility; I was hooked on the movement of the fabric. So it’s this flowing element as well as men inspired tailored clothing. It’s almost more like a costume—a new-age costume.
Do Icelandic designers think practically when designing their clothes, keeping in mind that they have to try and sell them?
No. I think it’s about 50/50. Practical thinking didn’t really exist a few years back, which is healthy and awesome in a way. But you have to consider many elements. If you’re designing a dress that is expensive to make, a flamboyant piece of art that would look great on the catwalk, then it’s probably too pricy to sell. You have to have a few showpieces in your collection that you’ll never sell, but 75% of it has to be something you can produce in a few sizes. Some things only work on a perfectly built model, but as brilliantly looking as it can be, you’ll probably never sell it. You can at best let the models borrow it, but they won’t afford to buy it. So you have to find this middle ground, which is annoying but that’s how it is. 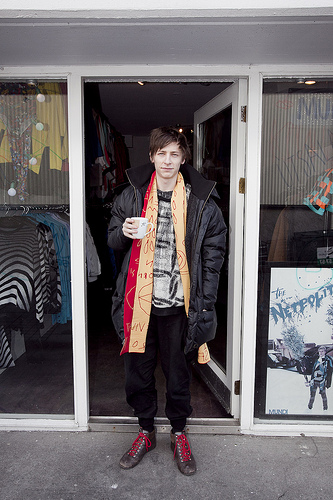 A Rebel With A Vision:
MUNDI VONDI – 66°N
Has the transformation from graphics to fashion affected your designs?
Well, I make all my designs graphically. The collections are graphic. It’s mostly textile design, which is in essence pretty graphic. I’m focused on working with textile and knitting. Prints and stuff like that. I also create the mood board [a collage of images and ideas to create a concept] graphically so it pretty much dominates my design.
How did you go about mixing fashion with the film medium?
I made my first short ‘The Rabbit Hole,’ with a grant I received for marketing purposes. I’ve always been enthusiastic about filmmaking. I think by fusing various forms of art you obtain a new vision, which is healthy for your creative psyche.
Your films are however quite different from the promo films you see in the fashion industry…
Most fashion films hinge on mood and atmosphere. They don’t have an idea to work from; they just have a look in mind and feature models goofing around. I find that pointless and shallow. My method is de facto criticism on the way people make videos in fashion. By making a narrative film you kind of take it to the next level.
The fashion film tends to reflect the ego of the artist and nobody besides the artist understands it. I get this take on things, but I find it boring. You can actually create this “world” while allowing people to understand it.
Do you think your collections have the same rebellious attitude as your fashion films?
Definitely. I don’t fit in anywhere. I’m a rebel. I don’t like labelling. If you have a certain style and an eye for things, you can use any medium as long as you stick to your own rules. With me it’s always the David and Goliath battle. I’m always at war with the rest. It’s not that I want it; it just kinda happens.
Tell me about your new collection in collaboration with 66°N.
It started last year when 66°N was doing a show in The Blue Lagoon and borrowed some of my pants and accessories to accompany their collection. Sæunn, the head of design at 66°N, suggested that we do something together and we finally decided to create this co-op, a fusion collection. It’s a great landing actually. I’ve always wanted to use a tech-factory, and they’ve been searching for a more creative take on their stuff. And this is just the beginning. We plan on taking things further and hopefully we’ll have a new collection every year.
What role has RFF played in the fashion world?
It has raised the fashion industry to another level. Before RFF you couldn’t really showcase anything and it’s important that designers have a platform to show their work. The cost to partake is relatively low but we still manage to fly in industry people and make it look a bit fancy. We realise of course that this is a tiny event compared to fashion weeks in Copenhagen and Paris and such, but we’ve managed to put Iceland on the map. And it’s going be exciting to see where we’ll go from here.