Anyone Can Be The One

Though she’s never been to Iceland, artist Tracey Moberly can relate to the residents of Reykjavík.
In 1999, Tracey co-opened the Foundry in an old two-story bank building in Shoreditch, London. It served as a bar, art gallery, performance space and underground political meeting place for the East End until the building owners, the extremely wealthy Reuben Brothers (worth seven billion euros) decided to turn the bar into a hotel. To anyone who remembers concerts in NASA or fears the tall shadow of a new hotel on Austurvöllur square, the story is familiar. 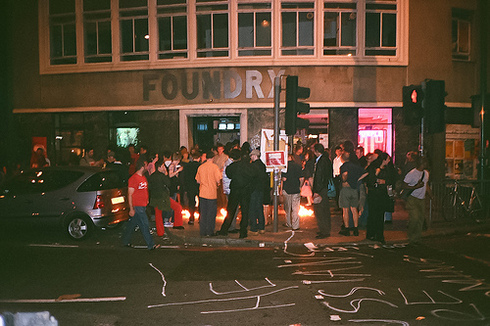 Her visit this November has nothing to do with NASA or the Foundry, but everything to do with the state of the arts and creative communities. As a speaker at this year’s You Are In Control (YAIC) conference, Tracey will discuss her recent text message based memoir, as well as “the interaction of environment, population expansion and personality with the continued development of digital communication and querying the place of the creative within this process.”
Text me up
Tracey has saved every single text message she has received since her first in 1999, which she got while eating lunch with colleagues from Manchester Metropolitan University. “I was due to meet a friend and he texted me saying that he couldn’t make it because he was going to a funeral,” Tracey says. “None of us could work out what this little envelope symbol was.”
At the time, Tracey was experiencing a difficult break-up, and as further texts continued to stream in that week she said she found herself being cheered up the words of encouragement filling her inbox. “You never get nasty texts, or at least I don’t. People are far more likely to say nasty things down a phone line,” Tracey says. “People just don’t seem to text aggression.”
She decided to preserve the texts for posterity and her own viewing pleasure, on scraps of paper. The scraps became books, then journals, then, as technology caught up with her project, digitally downloaded data. The collection has inspired a number of projects including five rounds of exhibitions around England, a live installation at Tate Modern and her 2011 memoir ‘Text-Me-Up!’
In her memoir the texts serve to ground the events of her life. The first section contains randomly selected texts. The second, more strictly autobiographical section makes sense of a series of specific texts chosen to open and close each chapter. In the final section Tracey uses conversations, similar to the kind that appear on iPhone text conversations.
Art vs technology
Tracey earned her bachelor’s degree in fine arts, but it’s been years since she’s actually touched paint to a canvas. Expanding technologies and new apps have transformed the way she approaches and creates art. “I started using Instagram,” Tracey says, for instance. “So I’m taking a photo and putting that on the social network site and then basically turning it into a painting, so I don’t need to make a painting of that anymore.”
Tracey believes the new technologies available to artists will increase artistic output. “I wouldn’t say it influences what constitutes art, but I think working within an artistic framework and using new technologies, specifically a mobile phone, as your tool, really complements art,” Tracey says. “You can really progress with it and take things further.”
While Tracey’s artistic output is now primarily through technology, she still believes in the value handcrafts. In March 2007 she unofficially opened London Fashion Week with a collection of 80 lingerie pieces that she hand wove. The project combined the digital medium of television with the more hands on project of creating clothing.
“Using those skills with new digital technology creates other things,” Tracey says. “So you’re not just relying on technology, you’re using other methods as well. That’s creating a different type of art.”
Her unofficial fashion week collection also included another important aspect of Tracey’s work: her activist tendencies. The project was in conjunction with the program ‘F*** Off, I’m a Hairy Woman,’ and dealt with issues of body image among women. As befitted the theme, she chose human hair to complete the project.
“The whole program was a social/political thing on women and how young girls have started to think that getting waxed is really normal.” 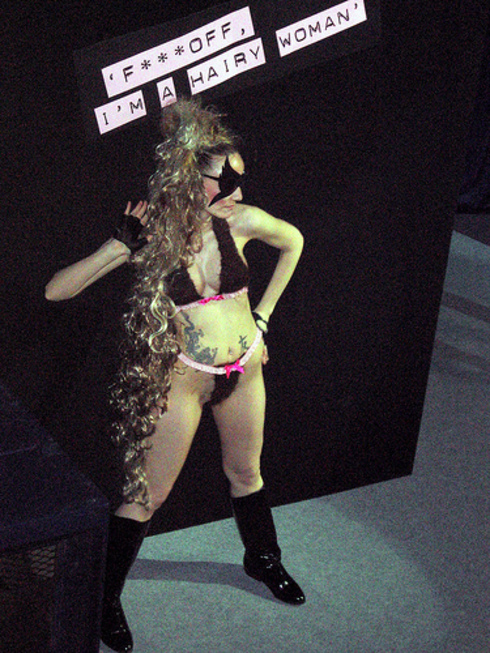 Activism art
One of Tracey’s earliest acts of activism art occurred in 1995, when she took on an offensive advertising campaign in Manchester.
“I was driving in the car with my two children who were really little at the time and my one son in the back goes ‘Mummy, Mummy, what’s the summer of 69?’ And I’m thinking it must be the summer of love,” Tracey says. “Then I saw Beaver Espana. You can’t turn the channel off like you can a TV. You have to look at these billboard posters.”
Club 18-30 offers vacation packages for young adults, many travelling alone for the first time. Their ads at the time featured a series of humorous sexual innuendos. The company received several complaints from local residents in Manchester, and especially bothered Tracey, who noted the lack of safe sex warnings. At the time, the UK government was heavily promoting safe sex in the face of the AIDS epidemic and the advertisements seemed irresponsible for leaving out that message, she says.
So Tracey, along with two other friends, decided to fix this glaring oversight. They woke up early one morning and tagged all of the Club 18-30 billboards in Manchester with safe sex messages, and helped end the campaign altogether.
“Everybody’s got a right to express what they think is wrong or what they think is right,” Tracey says. “I think if a person takes a stand and does something then things will happen. It just takes one person to start people up, and I think that anyone can be that one person.” 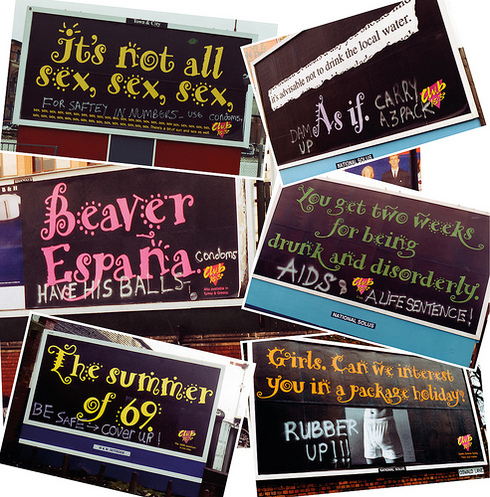 All of Tracey’s artwork is grounded in social and political issues. Her various projects have addressed domestic violence, Hepatitis C, gun control and human trafficking. In 2007 she and Mark Thomas (“the UK’s Michael Moore”) responded to a UK law banning protesting near the Parliament building by founding McDemos, a for-hire protest company. For five Euros the company would stage a protest for the client and send them a photo.
Not all the protests have been successful. The Foundry is still closed and the building owners have kept the building locked tight. There was, however, one small victory. The walls of the Foundry contained eight original Banksy drawings, collectively worth millions of euros and when a company partnered with the Reuben Brothers showed interest in the artwork, Tracey painted over each and every one.
“I must have been the only person desecrating Banksy two years ago,” Tracey says. “I literally gouged them out of the walls. I gouged millions of pounds out of the walls.”
As for Reykjavík locals hoping to save NASA, she thinks the opposite might work. If Banksy’s artwork was valuable to the Reuben Brothers’ partners, then similar artists might make NASA valuable enough to save. “If those artists were invited to paint all over the building, then the building would be worth more,” Tracey says. “Or you could get a collection of artists from around the world… that would be great.”
—
The YAIC Conference will take place at Harpa November 4–6. Check it out! Read more about Tracey Moberly (http://www.sanderswood.com/) and follow her on Twitter @TraceyTM.