The general consensus around here about 2010 seems to be “good riddance”. Where  2009 gave us hope that we’d be able to  emerge from the rubble of our ruined economy,  2010 was more like striding proudly from  said rubble, and falling flat on our faces. Let’s  have a look at the stories that made this year  that special Icelandic blend of disappointment, rage and wry laughter.

JANUARY
The previous December,  parliament narrowly  passed into law the Icesave  deal. Wait, we  mean the first Icesave  deal. From the beginning,  people hotly debated  on the one hand  that taxpayers shouldn’t  bail out bankers, and on  the other hand, that we’re sorta kinda bound  by international law to pay up. In the end, Iceland’s  elected representatives would find the  President play his trump card for the second  time in Icelandic history when he told the nation  that he was not going to sign the bill into  law, but refer it instead to national referendum.  In fairness to the President, though, the Icesave bill was overwhelmingly rejected by  the Icelandic people in the referendum, and  the new deal on the table will cost us billions  less. 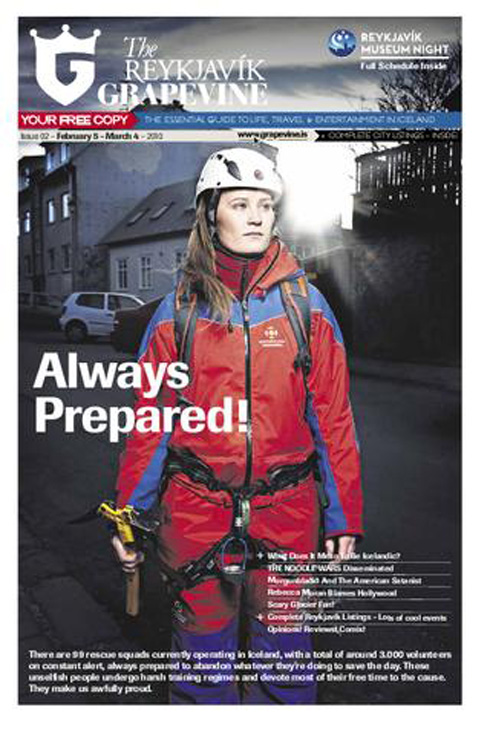 FEBRUARY
This month saw the aftermath  of the Icesave  deal’s veto, with Dutch  and British authorities  fuming with rage and  accusing the Icelandic  government of lying to  them. There’s just no  pleasing some people.  Iceland also extended  help to Haiti, following a devastating earthquake,  by sending rescue workers and tonnes  of bottled water to the country. The brightest  story of the month, though, was the introduction  of the Icelandic Modern Media Initiative,  a parliamentary resolution guaranteeing protections  for whistleblowers and investigative  journalists from being pressured by the  wealthy and powerful. This resolution would  have implications later in the year, when  WikiLeaks became one of the top stories in  the world. 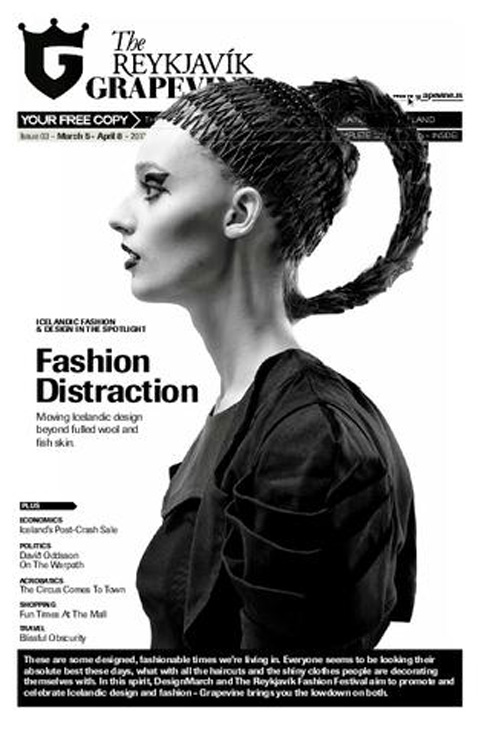 MARCH
Icesave referendum  time! Grapevine liveblogged media coverage of the event, and the results confirmed what numerous opinion polls  in the previous month  had been indicating—  this thing was dead in  the water. Sure enough, over 90% of those who voted on the Icesave  deal voted no. The biggest story of the month,  however, is undoubtedly the eruption of Fimmvörðuháls in Eyjafjallajökull. It was a “tourist  volcano”—pretty plumes of lava shooting up in  the air, doing no real damage to anyone or  anything. Many pinned their hopes on this  eruption of bringing much-needed tourist revenue into the country. Boy were they in for a surprise… 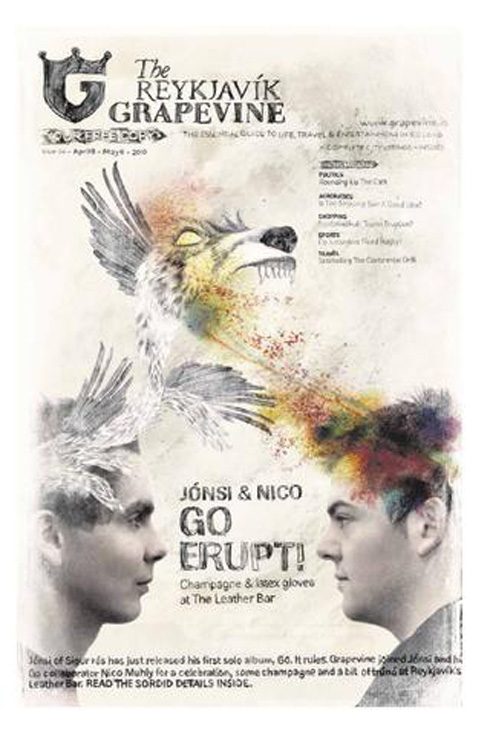 APRIL
With municipal elections  coming up, a joke party  started by comedian  and actor Jón Gnarr  called ‘The Best Party’  began to get more attention.  The Special Investigative  Commission,  which examined the  possible causes of the  2008 bank collapse, released its report. Everyone  looked at the report which said that  conservative ministers were incompetent, the  Central Bank turned a blind eye, and that  bank managers were insatiably greedy and  said, “Duh.” The Eyjafjallajökull eruption—  which had gone from pretty lava fountain to  giant ash-belching machine later in March—  shut down air traffic across Europe and parts  of North America, making everyone angry at  Iceland again. 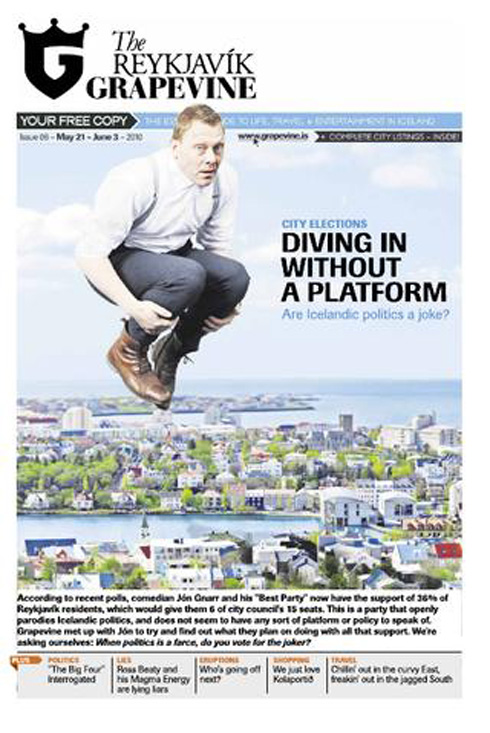 MAY
Former Kaupthing director  Hreiðar Már Sigurðsson  was arrested by the  special prosecutor for  numerous charges of  violating financial laws.  A few hours later, former  Kaupthing bank  manager in Luxembourg,  Magnús Guðmundsson,  was also arrested. A few days later,  former Kaupthing chairman Sigurður Einarsson was listed as wanted by Interpol.  This month also saw a little-known company  called Magma Energy poised to purchase  nearly all of Icelandic power company HS  Orka, despite the company’s CEO, Ross Beaty, assuring Grapevine the previous September  that they had no intentions of doing so. Outrage  ensued, with artist Björk Guðmundsdóttir  spearheading the campaign against the  company, and more lies from Beaty followed.  The month finished with a bang, as city elections  saw the Best Party take the mayoral  seat, forming a majority coalition with the Social  Democrats. 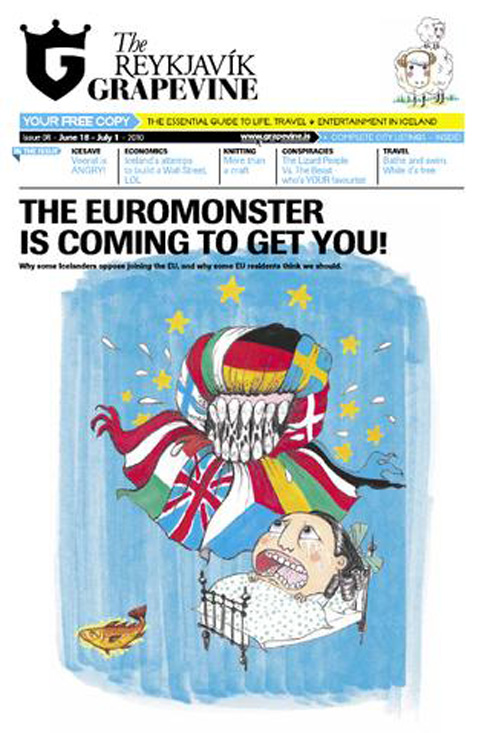 JUNE
June was a very good  month for gay rights.  Parliament passed a law  that allows single women,  as well as homosexual  couples, to have access  to donor eggs and  donor sperm for the  purpose of artificial insemination.  Also, Iceland’s  parliament passed a law that eliminated  the distinction between “marriage” for  straight couples and “civil unions” for gay  couples, creating instead one marriage for all  Icelanders, regardless of sexual orientation. Jón Gnarr officially became the mayor of Reykjavík, and the Icelandic Modern Media  Initiative was passed in parliament. As a resolution,  though, not a law. Still, that’s something, right? 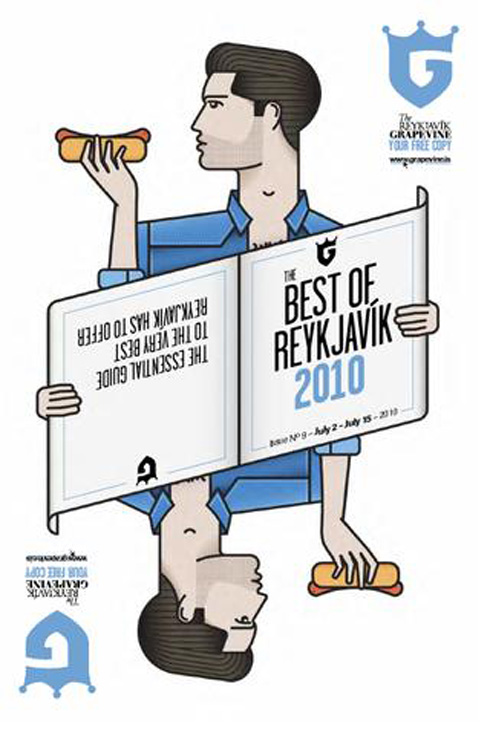 JULY
Pretty much the single  most noteworthy story  of this month was the  back-and-forth between  Magma Energy  CEO Ross Beaty and  artist Björk Guðmundsdóttir.  He made a coy,  not-entirely-serious  proposal to sell her  shares in the company, and she responded to  his condescension with expected annoyance.  An online petition to put Icelandic natural resources  in public ownership began to gather  momentum as well. Ultimately, the government  would refuse to confirm the sale of HS  Orka to Magma Energy, pending an investigation  into the legality of the deal. 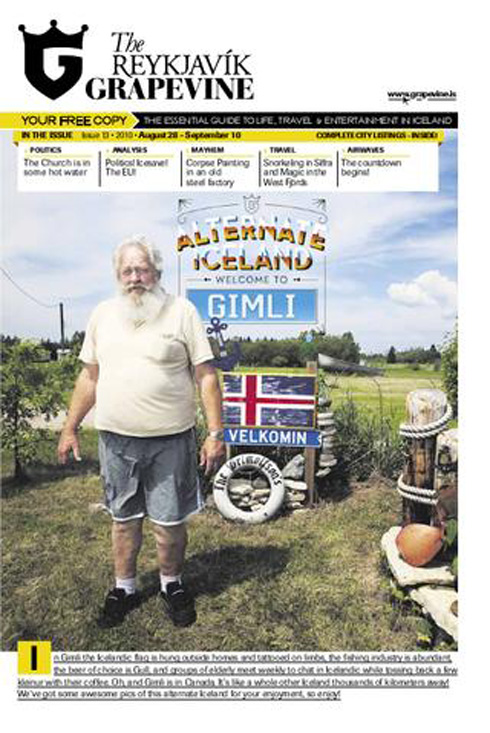 AUGUST
This month saw continued  pressure on Magma  Energy, as thousands  signed the petition to  put natural resources in  public ownership. Also,  Iceland began to receive  more attention on  the world stage, thanks  to WikiLeaks. Some of  the attention wasn’t the good kind, though.  Liz Cheney—former US vice president Dick  Cheney’s daughter—called upon US president  Barack Obama to compel the Icelandic government  to shut down WikiLeaks, while Republican  senator John Ensign decided to  make his displeasure known by temporarily  blocking US President Barack Obama’s nominee  for US ambassador to Iceland. This month  also saw the national church feeling the heat  with regards to how they handle cases of  sexual abuse within its walls. The resulting kerfuffle saw a rise in de-registration from the church, and great calls for separation of church and state. 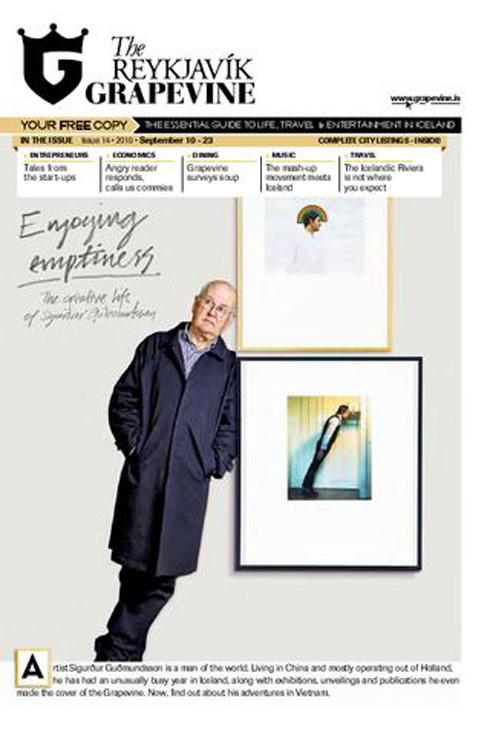 SEPTEMBER
While Magma Energy and the national church dominated the headlines, Jenis av Rana, chairman of the Christian Centrist Party of the Faeroe Islands, told Faeroese media that for  Icelandic Prime Minister  Jóhanna Sigurðardóttir  to come to the Faeroe Islands with her wife was “a defiance of the Bible.” Legislators from  both countries have harshly denounced the  MP’s remarks. The month finished off with  parliament voting in favour of charging former  Prime Minister Geir H. Haarde with neglect  and mismanagement that helped contribute  to the economic collapse. He will be tried in a national court in 2011. 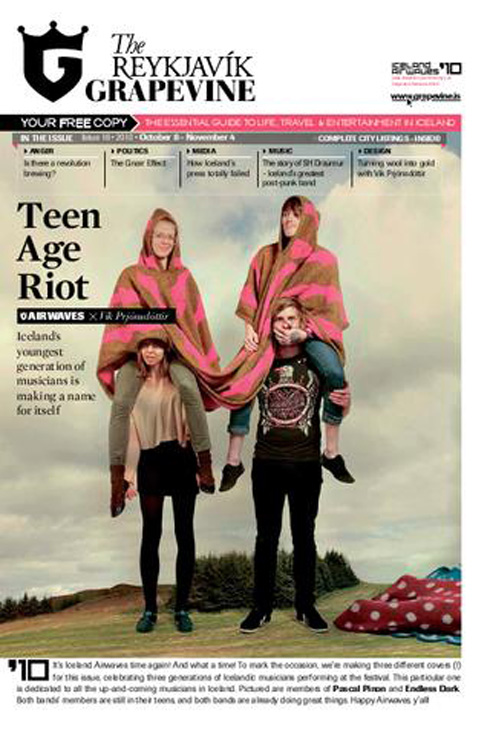 OCTOBER
This month started with  anti-government protests  from different  groups with different  goals. While the first  protest saw some thousands  attend, subsequent  protests featured  far lower numbers, and  would eventually peter out by the year’s end. While the government  decided that the investigative committee on  Magma Energy’s sale of HS Orka had given  the green light for the sale, a panel comprised  of former committee members and Björk Guðmundsdóttir contended that the government  could still block the sale on the ground  of imminent domain. Every media source in  the country except Grapevine ignored this news. A Reykjavík city council proposal that would ban church officials from proselytizing in play schools was strongly contested by the church, but would eventually pass. 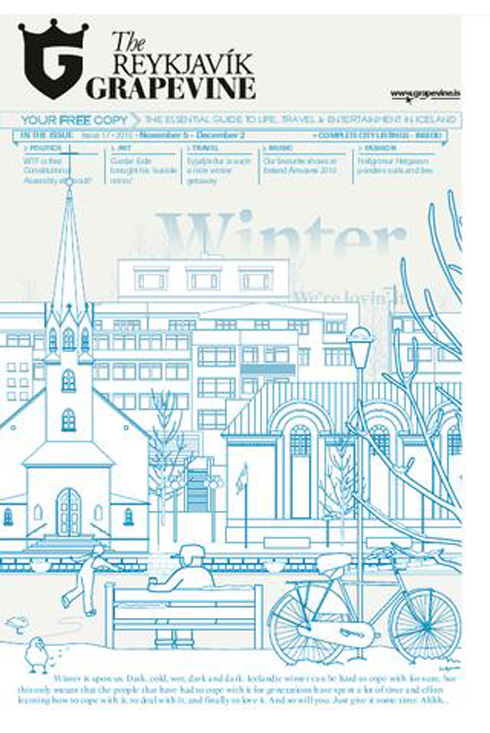 NOVEMBER
Paul Ramses, arguably Iceland’s most famous  asylum seeker, announced  that he was  running for president of  Iceland. It also came to light that the US embassy  was engaging in  surveillance of private  citizens living in the neighbourhood around the building, with  some reports that security firm Securitas had been hired at one point to root through the  trash cans of people living on the same street as the embassy. The embassy denied that it  was engaging in spying, saying that it was only looking for suspicious behaviour. Controversy  arose when the Grapevine reported that the Blood Bank was turning away people who  couldn’t speak Icelandic. The strong response this story generated led to the Blood Bank reconsidering  this policy. 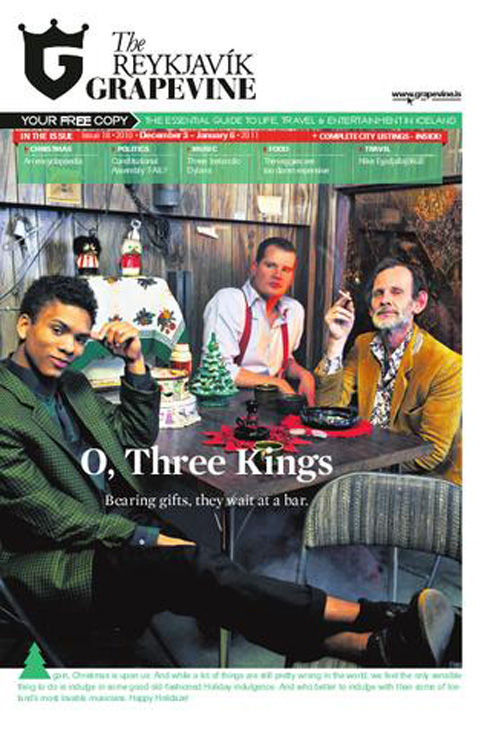 DECEMBER
Elections for the constitutional  assembly concluded, with one of the  lowest voter turnouts  ever, and a general  sense of cynicism and  disappointment as it  seemed well-known Icelandic figures all  scored a seat, even if  some of them didn’t seem to have any platform  at all. As WikiLeaks’ infodump of thousands  of diplomatic cables generated world  attention, Iceland stepped up to assist the  website, with private companies offering to  serve as proxies for donations, and parliament  again voicing its support for WikiLeaks. The  year concluded as it began: with Icesave. A  new deal was reached between Iceland, Britain  and Holland with much fairer terms. The  President hinted that he might again refuse to sign the deal into law. To which we can only  say “oh god please no, not more Icesave”.