The twofold catastrophes of financial collapse and volcanic eruption:

When I was young, Iceland didn’t make world news a lot. Sometimes you would stumble upon funny news items about beer being prohibited in Iceland, about there being no dogs in Reykjavík or about the rampant inflation in Iceland (which often surpassed 100%). But in general, Iceland was usually not in the sights of the world media.

All the same this has been described as a period when Iceland was a relatively great power, as great as a densely populated island far in the north can get. This was due to the enormous strategic importance of Iceland in the Cold War, as a place to monitor naval and air traffic in the Northern hemisphere. 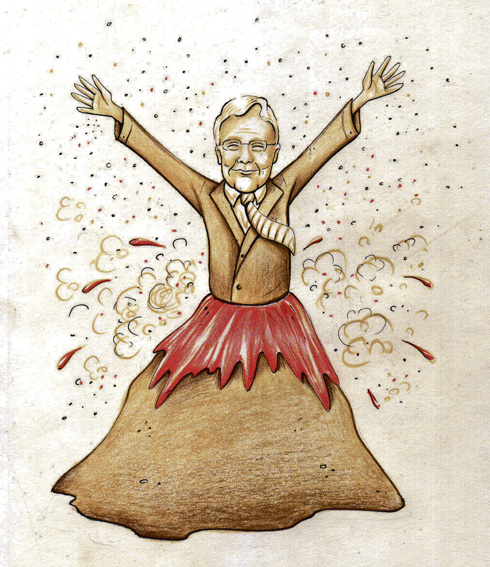 A byword for catastrophe

Icelanders soon learned to use this position to their advantage. The running threat was to withdraw from NATO and close down the large US military base in Keflavík. This was even used to pressure our Cold War allies into buying fish that would otherwise have been unsellable. After we engaged in the so-called Cod Wars with Britain, Henry Kissinger wrote of Iceland: “I sat there in wonderment. Here was an island with a population of 200,000 threatening to go to war with a world power of 50 million over codfish… I thought of a comment by Bismarck over a century earlier, that the weak gain strength through effrontery…”

Nowadays nobody knows what NATO stands for, and the military base in Keflavík is a ghost town.
But Iceland is in the news on a global and most unprecedented scale. It seems we have become extremely good at exporting our disasters. Iceland has become quite famous in the last two years, but this fame is admittedly a dubious one – in a way, the country has become a byword for catastrophe.

Last month, images from Iceland were televised all over the world. They seemed to show a devastating volcanic eruption, whole regions enveloped in volcanic ash, people wearing masks to avoid inhaling poisonous fumes, suffering animals. At the same time, ash emitting from the Eyjafjallajökull eruption interrupted flight traffic on an unprecedented scale; airports from Britain to Turkey were forced to close down. Millions of passengers were stranded. A video of a young and angry Scottish man became a hit on YouTube. “I hate Iceland!” was his message.
News reporters, specialists in catastrophes, descended on the country, with their cameras and satellite discs. This was the second time in little less than a year that they had been to Iceland. The first time was when the Icelandic financial system collapsed over the course of a week in October of 2008. It was noted at the time that some of these reporters came directly from Afghanistan and Iraq—thus Iceland became the disaster area du jour.

Media interest in the “catastrophe” is high; they just don’t seem to get enough of this admittedly picturesque story. As a result, I have talked to a lot of foreign media. For example I’ve been interviewed at least seven times by the Japanese press (big in Japan?). But the most desired interlocutor of the foreign press—our Prime Minister, Jóhanna Sigurðardóttir, being media shy, and, admittedly, a bit boring—has been president Ólafur Ragnar Grímsson, a consummate political survivor who’s career reaches back into the sixties. 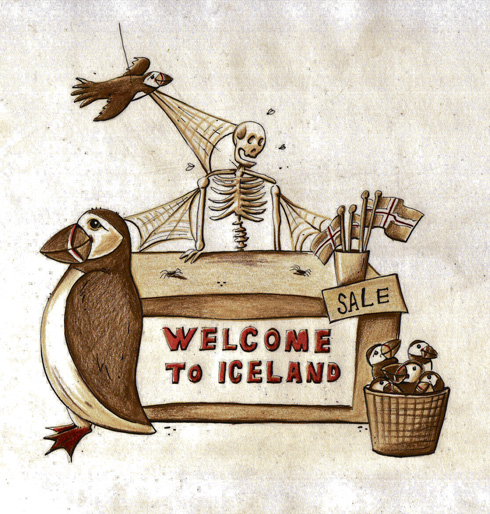 “You ain’t seen nothing yet”

Just after the eruption Ólafur, a man who relishes the limelight, gave interviews to international media—most notably to the BBC—where he basically said that people outside of Iceland hadn’t seen nothing yet in terms of the island’s potential to erupt (thus paraphrasing one of his most famous utterings about the Icelandic banksters in their golden days: “You ain’t seen nothing yet”). There was another eruption coming, and this one would be much bigger. “Be afraid, be very afraid,” was the gist of Grímsson’s words.

This caught on with the foreign press, in part because the name of the volcano Grímsson was talking about is so much easier to pronounce: Katla, instead of Eyjafjallajökull. Katla is admittedly an active volcano which is due to erupt sometime in the future, but it is difficult to say when or what the impact will be, and the President certainly is no geologist, just a politician with a love for the spotlight.

In the following weeks, the tourist industry fell into a state of total gloom. Not only were tourists unable to come because flight problems, bookings also fell to an all time low. The centre of Reykjavík, heavily dependent on tourism with its souvenir shops full of stuffed puffins, suddenly looked quite empty. And this in a year that was supposed to be the best ever for Icelandic tourism.
For the crisis (kreppa, as we call it) has been quite beneficial to the tourist services. Iceland, formerly the most expensive country in Europe, has become—well, not dirt cheap—but relatively inexpensive for those who make an income in Dollars, Pounds and Euros. One can even witness German tourists buying more than one beer at Icelandic restaurants. At the same time, after the collapse of the Króna, it has become impossibly expensive for Icelanders to travel abroad. There are still strict currency restrictions in place.

We are not drowning in ash

What was not reported in the foreign media was that almost no ash from the volcano reached Reykjavík and the most populated area of Iceland in the Southwest. The place of real impact is actually very small, compared to the size of the country. My son and I conducted a small experiment one night, leaving a white dinner plate outside in our garden on a night Iceland’s meteorological office had predicted ashfall in Reykjavík.

In the morning there was absolutely no ash on the plate. However, we live in the centre of Reykjavík, and this being a weekend, the town was full of cigarette butts— and ash.
A different kind of tourist has been around since the collapse of the banks. These are people who are owed money by the Icelandic financial institutions. Apparently the amount foreign creditors lost on the Icelandic banking system is about five times the nation’s GDP. So there has been a steady stream of lawyers and other interested parties to the country, even a conference of alleged Russian oligarchs and kingpins in 101 Hotel in January of 2009.

But there are also lone individuals such as the Dutchman Gerard Van Vliet, who put the funds he intended to use for relief work in Africa into the infamous IceSave accounts of the now defunct Landsbanki. Gerard has come to Iceland repeatedly, in hope of getting his money back. He probably won’t, but he has become a known and well-respected figure in the country and is even considering writing a book about the experience.

Van Vliet will have a lot of material to work with. On April 12th, we saw the publication of a long awaited report on the collapse of the banks—nine volumes totalling at over two thousand pages—written by a special committee, nominated by Alþingi. The report describes gross negligence and incompetence by the political class, regulators and officials, and probably criminal activity by the managers and owners of the banks. It seems the Icelandic legal courts will be totally inundated in the near future.

But so Iceland is again connected with disaster. In October of 2008, our friends in Greece contacted us, asking “Are you OK?’, offering to send us some food. This April, after the eruption of Eyjafjallajökull, the Greeks—who now have their fair share of trouble—contacted us again, repeating their message of food and aid.