Although his acting in Iceland—with the Vesturport theatre group and in popular films and TV series such as ‘101 Reykjavík,’ ‘Sveitabrúðkaup’ (“Country Wedding”) and ‘Mannaveidar,’ (Man Hunter)—have made Ólafur Darri a household name here, it wasn’t until 2013 that he really broke into Hollywood.
Following his role alongside Mark Wahlberg in Baltasar Kormákur’s ‘Contraband’ (a remake of the director’s 2008 film ‘Reykjavík-Rotterdam,’ in which he also appeared), Ólafur Darri picked up parts in ‘A Walk Among the Tombstones’ starring Liam Neeson, Jonathan Demme’s TV movie ‘Line of Sight,’ the HBO series ‘True Detective,’ starring Matthew McConaughey and Woody Harrelson, and, of course, ’The Secret Life of Walter Mitty,’ directed by Ben Stiller.
At the start of 2014, Ólafur Darri is poised for international greatness, but he still had time to sit down with us and talk about working with Ben Stiller, his relationship with director Baltasar Kormákur, acting drunk, and being a bastard on film.
You had your first big Hollywood break with ‘Contraband’ in 2012. How did that come about?
I had done three or four films with Baltasar Kormákur [the director of ‘Contraband’] and probably three or four plays as well. Just before shooting ‘The Deep’ with him, I was offered a part in ‘The Three Musketeers’ [directed by Paul W.S. Anderson]. It was a great part, but in the end I had to say no because it just didn’t fit with the shooting schedule of ‘The Deep.’ When we were shooting, Balti knew he was going to do ‘Contraband’ six months later and Balti, being who he is, says, “You know, yeah, it’s fine. I’ll get you a part in my film.”
Having seen ‘The Three Musketeers,’ I’m quite happy I wasn’t in it, but at the same time it was tough to get offered a part in a big film like that—your first part in a Hollywood film—and to have to turn it down. It was a strange feeling, but it all worked out for the best. I ended up auditioning with the casting director of ‘Contraband,’ Sheila Jaffe, and she liked me and I got the role. But, you know, he was the director. I can imagine him having at least some say, so… that probably helped.

Speaking of ‘The Deep,’ did shooting that film change you?
I think it did. I think everything you do changes you in some way. I love having my point of view changed and the great thing about being an actor is that you get a different view of so many things in life, and from so many angles. And you even get to do it in a pretty safe way. I mean ‘The Deep’ wasn’t completely safe, but there are people around taking care of you, so you don’t have to actually go through these horrible things that your character is going through.
Yeah, it did change me. It forced me to examine the reality of surviving something that you’re not supposed to survive.
Did you get any insight into survivor’s guilt?
For me, that was maybe the most interesting part of immersing myself in the film, the idea of survivor’s guilt and being the only one who survives something. Thankfully I’ve never had to experience something like that for real. I’ve only caught a glimpse of that kind of thing by studying it from the outside. It is somewhat like playing a character who struggles with a mental illness. We as actors can fake a lot of that stuff, as we know the mannerisms, we know the tone of voice—and you can play with stuff like that—but we can never truly be inside anyone who deals with mental illness or anything like that. So in the end, thankfully, we’re only guessing.

Jumping to the film ‘XL.’ What are some of the challenges of starring-in and producing a no-budget film in Iceland?
Actually, I think there might be advantages to doing a no-budget film in Iceland. You can ask a lot of people for a lot of favours. I mean, we were granted permission to shoot inside banks. Almost everywhere. The only place we had a tough time getting a license for was shooting at Alþingi [Iceland’s parliament].
So how long into the shooting of ‘The Secret Life of Walter Mitty’ did you ‘geek-out’?
[Laughs] ‘Geek-out’? What do you mean?
Well, I mean, you were acting opposite Ben Stiller, and he was directing you as well…
Oh that was surreal. Fortunately, I’d played a small part in a film called ‘Beowulf and Grendel,’ which had Stellan Skarsgård and Gerard Butler in it. That was my first role in anything with big-name actors. I’ve done bits and pieces—I’ve done some theatre in London and worked at the Royal Shakespeare Company. So I’ve been around a little. The only time I was really starstruck was when I met Jennifer Aniston. But thankfully, I was wearing sunglasses, so no one noticed. That was really funny, you know because I’ve met a lot of famous people. You think you’d be starstruck when you meet Nick Cave, for instance, but I wasn’t starstruck when I met Nick Cave. But then I met Jennifer Aniston, and I couldn’t breathe a word. It was really funny. 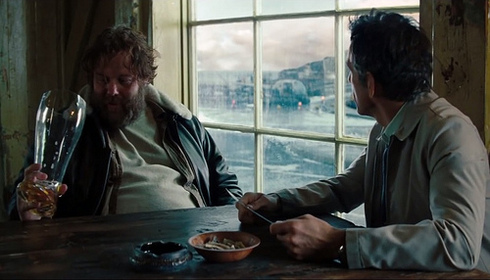 You get to do a fair amount of karaoke for your part in the film. Do you have a go-to karaoke song?
I have to say no. Well…actually I do. The music supervisor for the film, George Drakoulias, is such a great guy. He looks like me: big, lotta hair. And he loves to eat. So we instantly became bros. We went out to a karaoke bar in New York and I sang ‘Don’t you want me baby?’ That was a lot of fun, but usually I don’t do karaoke. I like to watch others do it. I’m just such a crap karaoke singer. But if you get me really drunk, I’ll do it.
Sounds like a plan. Between ‘The Secret Life of Walter Mitty,’ ‘XL,’ and some of your older roles, it seems like you pretty much have a Master’s degree in being drunk onscreen.
[Laughs] I mean, I have to say ‘XL’ was a master class on being drunk. Because that guy is just drinking and doing drugs—doing anything and everything. Before we started shooting, I was reminded of a ‘selfie’ I shot when I was making ‘Beowulf and Grendel.’ That movie was filmed in Vík, which is a pretty lonely place in winter. There was not a lot of stuff happening, so we would drink a lot of alcohol. And I remember coming into my hotel room and taking this picture of myself. I’ve never before—or since—seen that look on my face. So for ‘XL,’ I just dug up that photo, looked at it, and thought: “Okay, well, this is the place I have to go.”
Who is your character in ‘True Detective’?
It’s not a big character. I’m only there for a couple of scenes. It’s a stretch for me. Well, I say that like I’m not a big meanie.