Melting kittens, radiators that blush red when hot, clocks that stop time–welcome to the weird and wonderful world of Icelandic designer Þórunn Árnadóttir. After finishing her MA in product design at the Royal College of Arts in London in 2011, she moved back to her hometown of Reykjavík where she has been busy working on new designs. Amongst them is her newest PyroPet, `Kisa,’ a kitten-shaped candle that melts to reveal a charred aluminium skeleton.
Over the years, Þórunn has received numerous awards for her product designs, most recently being selected this year by Icon Magazine as one of 50 talents shaping the future. We met up with her at Spark Design Space, where she works when she’s not teaching product design at the Iceland Academy of the Arts and ceramic design at the Reykjavík Visual Arts School.
You recently launched a Kickstarter campaign to fund your PyroPet project, and in just 10 days you raised more than double your goal of 40,000 USD. Did you anticipate such rapid success?
Not at all. I showed the PyroPet series two years ago in Milan and after that people posted photos of it on some blogs. Then it recently exploded on Tumblr. I didn’t know it was a sellable product because I thought it was a silly idea. I found it surprising when loads of people were actually interested in buying it. 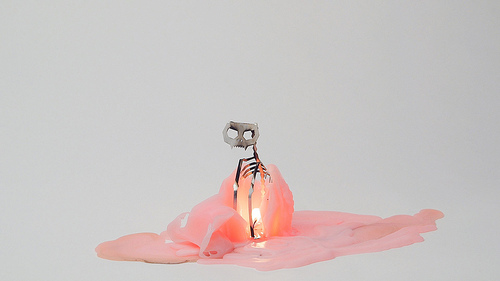 Where does the idea come from?
When I was at the Royal College of Arts I was working on the theme of losing something and I was thinking about objects, such as candles, which just disappear after they melt. So I was thinking, what is the purpose behind the candle? I was fascinated by how we make them in all sorts of different shapes, but they always just melt away. I wanted to make something more of it.
Why did you choose the colours pink and grey? Will there be other colours available later?
I like the contrast between the cheesy pink colour and the metal skeleton. A lot people find it difficult to buy something pink so they’ve asked for black, but I think it’s too dark. Light grey still works.
Will you be including other animals in the PyroPet series?
That’s the idea, to keep adding to it. I’ve almost got a bird ready now called Phoenix. That will be launched later. We’ve got the first prototypes ready.
When will the production of the candles start?
January or February. We’re starting to take orders from shops now.
Tell me about your Sasa Clock, which is also a necklace.
Sasa is Swahili and it describes the concept of time. In a lot of African countries there is a different attitude towards time. Of course they have clocks, but they’re not used to relying so much on clocks as we are. For them it’s more natural to live in the moment and not plan everything down to minutes and seconds. For example, in Ethiopia you wouldn’t say it’s 5:22. That would be too specific. They have a more relaxed concept of time there. So the Sasa Clock has an element of African time, being a necklace that you can take off and forget about the time altogether or you can use it to tell time, but it’s not more accurate than five minutes. 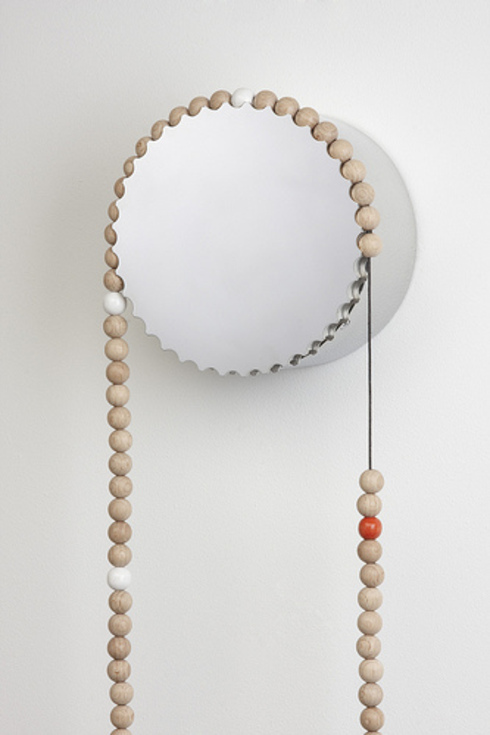 How did you come up with that?
I really like to push myself into thinking differently about objects. What is a radiator? Does it resemble something else, like a vascular system? Then I link these two things together and see what happens. Can the house be a living organism? That’s how I came up with the idea for my Sasa clock. I was thinking about whether there is another way that we tell time, and if it is different in other cultures than it is in Iceland.
So what’s next for you?
I’m actually working on two other projects at the moment. One is a project in East Iceland in collaboration with three other artists. The project is called Austurland Designs From Nowhere. We are working with local materials and production in East Iceland. We’re making the products from materials such as stone, seaweed, driftwood, fishing nets and antlers. We’re showing them at Spark Design Space during DesignMarch next spring and the plan is to go to the London Design Festival after that. I can’t say what we’re making yet.
The other is a Christmas window display for the Geysir shops in Reykjavík and Akureyri. It has to do with jólakötturin, or the Yule Cat, who is the Christmas fashion police. It will be launched mid-November when the Icelandic designer Erna Einarsdóttir launches her new clothing line. The Yule Cat will be wearing clothes from her collection.