At the end of the month, our fair city will be inundated by performance. Since 2002, the Reykjavík Dance Festival has been the single most important time of year for Iceland’s independent professional dancers and has contributed to the vast growth and expansion of their work.
Operating on a purely local level for its first few years, the festival had a couple of re-toolings until they landed on a model that truly fit. Since last year, the event is curated by different artistic directors, and this year it is spearheaded by multi-platform performers Erna Ómarsdóttir and Valdimar Jóhannsson. It is also partnered with the Lókal International Theatre Festival for the second time and shares the same social space.
This year’s edition stands out for having the highest number of international performers involved in the festival. Although the festival is primarily made by and for the local freelance dance community, the growing number of foreign guests allows them to make better outside connections, build collaborations and fit into the context of the European dance community.
Among the international performers are Deufert & Plischke from Germany, bringing a piece entitled ‘ANARCHIV#2: second hand’ which Thomas Plischke says allows the audience to play along with them, but never forces them into participation. The Brussels-based Dane Mette Ingvartsen will perform ‘Evaporated Landscapes’, a piece comprised of ephemeral elements subject to factors like temperature, lights, body bass and mechanics. Heine Avdal and Yukiko Shinozaki, the Swedish-Japanese couple who go by the name Fieldworks, will deal with uncertainty, immediacy and humour in their piece ‘Borrowed Landscapes’, performed in the Bónus grocery store. 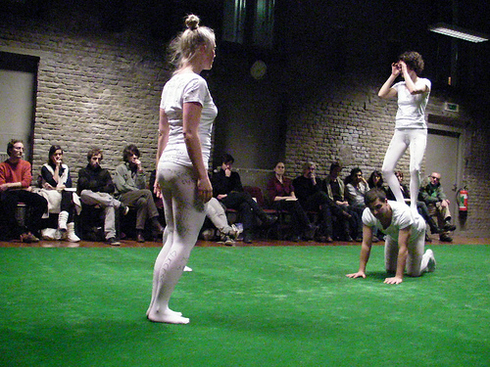 Kattrin Deufert & Thomas Plischke let the audience get playful in ANARCHIV#2: second hand.
Back with our locals, there will be several much anticipated premieres, including ‘Scape Of Grace’ by Saga Sigurðarsdóttir, ‘Soft Target Installed’ by Margrét Sara Guðjónsdóttir and ‘To The Bone’ by Erna and Valdimar’s company Shalala. The latter will also act as an introductory performance for the ‘Black Yoga Screaming Chamber’, an ongoing installation by Erna and Valdi found at various locations until September 1, which will bear some loud and intense fruit.
This festival is the local dance community’s answer to Iceland Airwaves: it’s just as cool and jam-packed full of amazing talent, and you don’t have to wait in long queues! So take the week off work, drop the kids off with the grandparents, devote one week of your life to performance art and enjoy!
—
Dance Festival Social Club
While the festival’s artistic director’s hands are spilling over with curatorial work, next year’s pre-selected directors, Alexander Roberts and Ásgerður G. Gunnarsdóttir, a.k.a. Choreography Reykjavík, are in charge of setting up the SUPER SOCIAL SPACE, a type of pop-up outreach space where the dance community and the non-dance related public can converge.
Taking place in Dansverkstæðið, a dance and choreography space attached to KEX Hostel, the space will be open for the festival’s ten days with a slew of free events – workshops, lectures, performances, dancing, and nightly parties. “It’s kind of like a magic trick or a con where we’re using DJs, free publications and free food to get people into the space,” Alexander says, “then we try to confront them with contemporary dance and choreography.”
He says this approach is a targeted response to the feeling that the Reykjavík dance community is an opaque, exclusive world where non-dancers see no room for themselves. His and Ásgerður’s company have been making a push over the past year to include different types of people into their works and he says this is an attempt to bring people in on another level.
So head over for breakfast and the Morning Clashes series, an evening meal and a Choreography For Dinner, or a late night drink and some rowdy dancing. They welcome everyone with open arms and jazz hands. 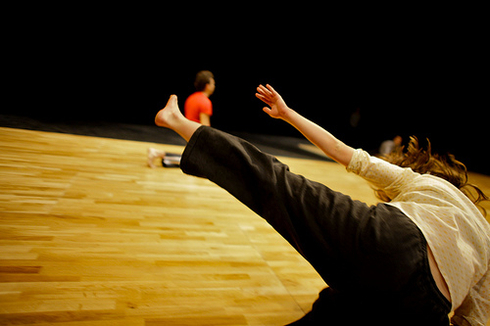