The cover of Sigur Rós’ ‘Valtari’ album features a photo of a large ship floating over a grass green ocean. There are no landmarks evident in the photo, which was shot off the coast of Grótta, a small island connected to Reykjavík by a narrow isthmus. It’s not about the place, says Lilja Birgisdóttir, the photographer behind the photo. It’s about the sea.

Lilja and her sister, artist and graphic designer Inga Birgisdóttir, are the younger sisters of Sigur Rós’ Jónsi and were commissioned by the band to design the artwork earlier this year. Inga used Lilja’s polaroids to create a collage for the cover. “We wanted it to be timeless and not connected to a specific location—just everywhere, everywhere and nowhere,” Lilja says.

As Lilja and Inga, consistent collaborators since receiving their degrees in fine art from the Iceland Academy of the Arts, worked on the album, they were inspired to begin a number of other stand-alone art pieces. The results of that creative period—photos, videos and a soundscape—will be presented in the Varúð exhibit opening on October 31.

“Sometimes when you’re working on an album cover or a video, as you go through the process you end up with all these side products. You go through all these ideas and cast some away and use one of them,” Inga says. “So this is such a nice opportunity to show all the things that come about when you make a cover.”

‘Varúð’ will feature videos by Inga, as well as several photographs, including original photos taken in an airplane and colourised images, created by Lilja. At one point during the interview she pulls out a sheet with two versions of the ‘Valtari’ image side by side—one in black and white, the other painted in with the yellows, greens and oranges of the album cover.

“It’s really kind of important,” Inga says of album artwork. “I mean the image that goes on an album, it says so much about the music, because you see it before you hear the music. It kind of moulds your idea about the album before you listen to it.”

The floating ship that adorns the ‘Valtari’ cover was inspired by the airy, light feeling Inga and Lilja sensed in the music. “With music―you can’t touch it, you can’t see it, but you feel it,” Lilja says. “Our job is to make something tangible out of it.”

Some of the images that will be exhibited were colourised using a specialised oil painting technique, Lilja says. Rather than painting over the photograph, the paint adds colour to black and white images. “Instead of trying to resemble reality, I’m using the colours as a layer on top of the image to bring something surreal to it,” Lilja says. 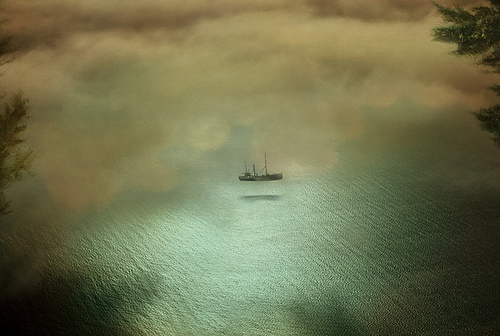 The videos, which will be played on loop during the exhibition, all either directly correspond to a ‘Valtari’ track or were shown during the band’s live concerts. One of the videos is an animation of Inga’s interpretation of the album’s third track, after which the exhibit is named. The video was created for Sigur Rós’ Valtari Mystery Film Experiment, a series of short films inspired by the tracks on the album.

“We never meant our music to come with a pre-programmed emotional response,” the Valtari Mystery Film Experiment homepage reads. “We don’t want to tell anyone how to feel and what to take from it. With the films, we have literally no idea what the directors are going to come back with.”

Unlike, the other videos in the exhibit, such as the animation of the album artwork she created for “Ekki múkk,” the “Varúð” video is meant to tell a story.

“Varúð means caution or warning so this image instantly came to my mind, someone making warning signs with a flashlight,” Inga writes. “I wanted the ‘Varúð’ video to have a slow build up like the song and leave something for the viewers to imagine for themselves. We have no idea who they are or what they are warning us about.”

Inga, whose other graphic design credits include album artwork for múm, sóley, Sin Fang and Jónsi’s 2010 solo album ‘Go,’ used a postcard featuring a picture of the Öxará river in Þingvellir National Park as the base of the video.

Water and the ocean appear several times throughout the exhibit, either directly or as a theme. The exhibit’s soundscape consists of a hypnotic loop of ship horns. “Ship horns are a method for ships to communicate on sea, it’s a language, and they all have a meaning,” Lilja says.

In this sense name of the exhibit is both a title and a literal action, an audible warning heard by visitors. The soundscape starts with five long ship horn blasts, which signals a warning. “It’s telling the audience that they have to be aware as they enter,” Lilja says.