I took a late afternoon flight from Reykjavík to Hornafjörður in East Iceland and was picked up by Magnús Guðjónsson (Maggi), who runs a farm and guesthouse in nearby Hólmur with his wife Guðrún Guðmundsdóttir (Gunna). Like much of Iceland’s expanding tourist economy, they’ve chosen to run a guesthouse and tour service alongside their sheep farm. In the wintertime, this includes a tour of Iceland’s wild reindeer, which are unique to the east of the country and leave their summer homes in the mountains to the grasslands and tundra of Hólmur.

Reindeer in Iceland are also a novelty in and of themselves. They didn’t get here until the 18th century, when the king of Norway brought them over from Norway’s Hardangervidda Mountains. He thought the Icelanders could raise them for food, but instead, they let them run free. Today, nearly all of the estimated 6,000 reindeer in Iceland are wild.

Get up and slow down

Before we hopped into a Range Rover to tear up land chasing down reindeer herds, Maggi and Gunna welcomed me into their guesthouse with cookies and tea. Their farm and the others around them abut glaciers that are tongues of the massive Vatnajökull glacier and are wrapped in mountains along the sides. The entrance to the farm faces the sea and the silence is only ever interrupted by gusts of wind blowing off the coast or a rare passing car.

After walking around the place, I was invited to a dinner replete with trout from a nearby stream, skyr with mountain blueberries and potatoes covered in fjallagras, a wild moss that the reindeer and some Icelanders collect and eat in the late summer. It is rich in calcium and helps the reindeer grow big, sturdy antlers.

I fell asleep in a food-filled coma and awoke to a searing red sunrise. The earth out there is covered in a delicate sheet of ice and the mountains are dusted in snow. If you came to Iceland for peace of mind, Hólmur is that sweet spot where you rediscover time moving slowly and space vast enough to hear yourself think. Around 9:00, Maggi sauntered out of the house with sleepy eyes and a soft smile, telling me that he and Gunna take it very easy in the wintertime and there is no guilt in sleeping in.

After a breakfast that included Gunna’s homemade bread and smoked trout, Maggi and I went through the livestock barn that they’ve branded as a petting zoo for tourists. They have several types of rabbits, loads of sheep and goats, chickens from China, and even two hens and a goat that will make cameos in the soon-to-be-released film “The Secret Life of Walter Mitty” starring Ben Stiller. Various scenes meant to appear as Nepal were shot around Hornafjörður.

The last stop on the tour of the petting zoo was the little wooden cabana of Álfur (Elf) the reindeer, who scrambled up onto his knobby legs when he saw Maggi. Maggi is, by all of the little reindeer’s knowledge and experience, his father. 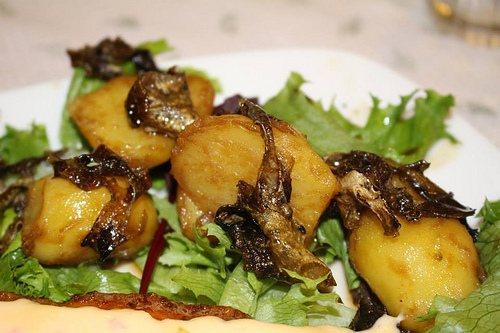 Álfur was a calf (a baby reindeer) when he was discovered by a reindeer inspector in the mountains east of Hólmur this past June. He was hungry, his mother was nowhere near and the man brought him to Maggi and Gunna where he was taken in and nourished with a mixture of milk, eggs and fish oil.

Prior to Álfur’s arrival, Maggi and Gunna had petitioned the Environment Agency of Iceland (UST) for a permit to have a domesticated reindeer. Typically the permits are only given out to zoos, but Maggi and Gunna had wanted a reindeer of their own for foreign tourists to visit, snap Christmas photos with and get close to. Having a domesticated reindeer like Álfur is particularly advantageous to Maggi and Gunna’s tourism business given holiday traditions in many parts of the world that actually developed out of the Arctic.

Historically, in the reindeer-filled regions of Norway, Siberia and Mongolia, people and reindeer shared a love of the Amanita Muscaria `berserker’ mushroom. Nordic shamans and Laplanders often claimed to have seen reindeer flying across the sky after consuming the fungi. On the 3,000-year-old mummified limbs of the nomadic Pazyryk people of Mongolia’s Altai mountains, archaeologists have even identified tattoos of flying reindeer. In what amounts to a continuation of the magical trip, images of flying reindeer are central to Christmas tales in North and South America, Oceania and parts of Europe even today.

Herding reindeer with a Range Rover

We took Álfur outside to play and then Maggi, Gunna and I hopped into the SUV to get up close to a few herds Maggi had spotted on the horizon. The car rattled most of the encompassing peace while it dashed across their land, but the reindeer seemed unthreatened by it. It wasn’t until I quietly crept up to them by foot that they took a keen awareness of another presence and, when I got within 100 meters, they all bolted.

We followed them with the car and snapped some pictures, tried more creeping up by foot and got closer each time. In all we spent about an hour going after two different herds while Maggi and Gunna filled me up with reindeer knowledge.
In the wintertime, Maggi wears a leather coat made of reindeer hide, which makes sense given the extreme warmth of the animals’ pelt. Reindeer can handle temperatures of up to -70 C because they’re covered in two layers: a thick, woolly skin topped with hairs that are hollow and can trap and heat air. Reindeer are fast, and can run between 40-60 kilometres per hour and they are fuelled by mosses and tiny white sprouts called reindeer grass. They have such a strong sense of smell that they can sniff out the white grass even when it’s covered by white snow. In North America, a wild reindeer is called a caribou. They aren’t called reindeer until they’ve been taken captive, so the term `reindeer’ in North America actually refers to a domesticated caribou.

Maggi pulled out his telescope so we could see the details of the reindeer from afar. One herd of about 14 had the faces of arctic cows, with long beards and terrifyingly heavy looking racks of bone atop their heads. In December, the males will lose their antlers and Maggi will go look for them to add to his collection.

We spent another hour or so visiting the Hólmsá River, getting up close to the glacier and learning about the history of the land. We heard ravens and tried to spot foxes that sometimes lay  in front of rocks by the glacier, taking in the sun.
Perhaps it was looking for napping foxes that made our eyes heavier and we returned to the farm to relax, feast more and visit with Álfur who has the demeanour of a five-year-old and lives to play and love. The sun was beginning to set on the drive to the airport and by the time the plane landed, the streetlights of Reykjavík illuminated the walk home, a reminder that time was picking up again and moving on.