Fimmvörðuháls is an old hiking trail in Southern Iceland that’s flanked by two glaciers, Eyjafjallajökull and Mýrdalsjökull. The name means “five cairns pass,” and whilst the original cairns are no longer used, it’s a well-marked path popular with natives and visitors alike. Between June and August each year, the summer weather allows hikers up past the dramatic Skógafoss waterfall and into the Highlands, passing through pebbly plains, snowy fields, and a still-steaming volcanic area before descending into the idyllic Þórsmörk nature reserve.

In recent times, Fimmvörðuháls had a brief spell of worldwide notoriety when it was the site of a volcanic eruption. The route was declared impassable for several days as volcanologists monitored lava flowing towards Þórsmörk; once it was reopened, many took the opportunity to walk its 22km length and check out the volcano in action.

Thousands of tourists walk Fimmvörðuháls annually, arriving from Reykjavík or nearby Skógar bearing hiking poles, water bottles, assorted box-fresh hiking gear and technical clothing. For the uninitiated, the correct attire can be an expensive business—walkers need to be warm and waterproof, but also able to easily shed and stow layers should the sun come out, ruling out most conventional clothing for one reason or another.

Thankfully our tour company, Icelandic Mountain Guides, is used to such dilemmas and offers boot hire to those who call ahead, as well as raincoats and loaned equipment, requiring first-time hikers only to dress comfortably and sensibly. The company has been running for fifteen years and is used to catering to groups of varying experience, grading the difficulty of each trip from one to five. We note with trepidation that Fimmvörðuháls ranks a four on the scale. 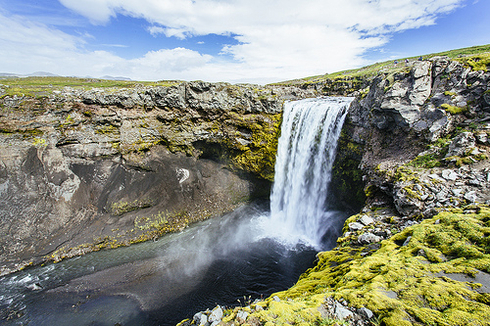 After missing the bus due to a lack of signage at BSÍ (the bus leaves from the front taxi rank, not the coach stop), we catch another and arrive at Skógar a few hours later. Our group comprises two international visitors, myself, Grapevine’s photographer, and our Icelandic guide, Anna. We introduce ourselves in the sunshine, and after a perfunctory check of footwear, clothing and food & water supplies, we set off slowly up the high stairway to the right of the waterfall. A bright rainbow appears in the spray, like a good omen for the day.

The path climbs past the Skógafoss waterfall viewing platform into a rolling green landscape, skirting the riverbank. Waterfalls come thick and fast—some are long, elegant streams that plummet into fissures far below; others cascade down over several steps, and others still are wide walls of foam that send cool mist onto our faces.

The first moment of difficulty comes when the path rises into a series of sandy ledges over a drop into the river. One precarious step has no support, and our guide helps us over. There seems no obvious way forward, but we zigzag up a steep section of rough hillside. Far below, some smashed planks lie in the rocky riverbed, serving as a timely reminder of the dangers at hand.

After a long plateau littered with boulders and glacial debris, the next landmark is a high footbridge over the Skógar river, but the steps on our side are completely missing. “Did you see them back there?” asks Anna, and I realise those planks were in fact the stairway in question, plucked from this spot by a swell of post-eruption floodwater. Eyeing the rusting metal struts, we climb some makeshift rungs, ducking through the railing to cross. 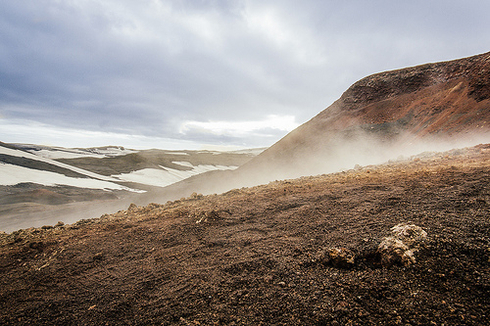 An island in the clouds

On the other side, we’re met by a chilly highland breeze and a rocky plain stretching out before us. Eyjafjallajökull looms to the left, graceful and silent. She’s an awe-inspiring sight—a vast, oddly alien protrusion from the earth, haloed by ash and mist like an island in the clouds.

The road forks, and as we labour along, Anna decides we should take the faster path. Although the gradient is easier, the terrain gets rougher, requiring concentration at every turn. I almost miss a dramatic ice mural that clings to a distant cliffside—out here, nature is quite the artist, and we pass many sculptural formations of eroded snow, dried lava and windblown sand that wouldn’t look out of place in a contemporary gallery.

At an elevation of about 1000 metres, two tent-shaped metal shelters roughly mark the halfway point, and a line of yellow poles mark the way across a series of ash-dusted snowfields, sandbanks and rocky outcrops. Each peak feels like a small triumph until we see the next one: “there’s always one more,” smiles Anna.

A couple of hours later, we reach the gnarled black lava field of the eruption. Magni and Móði, named after the sons of Thor, are two new craters that spewed forth a mass of molten magma, which has dried into a twisted black vista that begins abruptly where it solidified. The freshly formed rock is still hot to the touch, and sulphurous steam seeps from the ground everywhere as we pick our way through the living landscape. 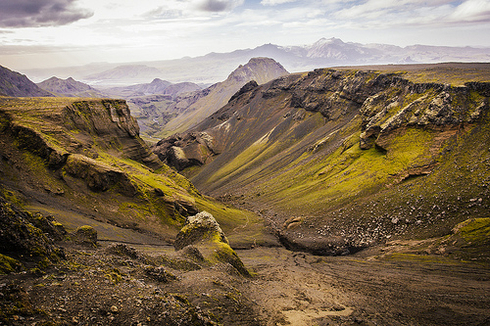 The high pass to Þórsmörk offers a spectacular view over the mountain range ahead, with hazy peaks stretching into the horizon in grays, greens and purples. After eight hours of walking, the descent presents some of the most challenging and tiring terrain of the hike. At one point, the trail becomes a series of alarming ledges on a vertical cliffside with a chain bolted into the rock for balance; another particularly steep scree bank has a rope hanging down the slope, without which it would be unsafe to pass. Finally comes a narrow, uneven, vertigo-inducing stretch of path with no support at all and sheer drops on either side—a terrifying path for anyone with an aversion to heights.

However, Anna is reassuring and encouraging throughout. She interprets her role more as a technical guide than a narrator of the geography and scenery, and stresses that such features should be taken with care, and that a slow, comfortable pace is preferable.

As we approach the sheltered, leafy valley of our Básar pickup point, the timer hits the ten-hour mark and the sky starts turning to a deep, rosy pink. We top up our water bottles from a freshwater stream then slump into the seats of the homeward bus, aching and glowing from a truly unforgettable day on the challenging but beautiful Fimmvörðuháls trail.

The Fimmvörðuháls Volcano Hike can be booked from Icelandic Mountain Guide’s website.