I’m exploring Iceland with my daughter. Veronica is in her ninth winter, as age is measured in Egil’s Saga. While investigating climate change I treasure having a junior adventurer along for company and perspective.

We’re in Reykjavik before sunrise. Veronica is crashed on a café couch. We are waiting for geologist Björn Hróarsson, or someone from Extreme Iceland, to take us to Jökulsárlón, which literally translates to “glacier lagoon.”

The small tour bus is full except for a couple of single seats at the back. A kind Australian, Zack, moves so Veronica and I can sit together. He’s traveling with a lovely and hilarious group of 30-year olds Veronica calls “the teenagers.”

After several hours of driving to the southeast we’ll see the floating icebergs. I’m excited but simultaneously troubled to know Iceland is melting. The largest glacier in Europe, Vatnajökull, is melting more rapidly than expected, like other Arctic and Antarctic ice. The sea rise and other impacts will be local and global. University of Iceland glaciologist Helgi Björnsson predicts Iceland’s main ice caps may vanish in 150–200 years.

Our guide for this trip is one Helgi Jón Davíðsson, “Helgi,” he says, “means holy.” A former businessman, he’s energetic, a fountain of knowledge and generous storyteller. 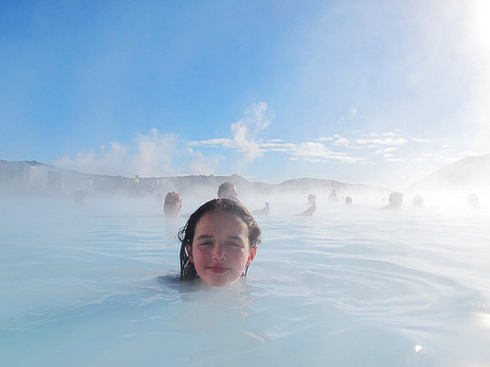 Youth emerges as a theme on this trip: youth is beauty, inspiration, eruptive and fearless. The young grow exponentially, as does Iceland, the youngest country in the world. Iceland expands some 2.5 cm a year.

Iceland feels vibrant, its geology a lethal and life giving mix of fire and ice. This country was born out of the ocean 14 million years ago. Iceland straddles the mid-Atlantic ridge divided by the North American and Eurasian tectonic plates. It’s a kid country compared to mainland Europe.

Veronica writes in her journal: “Iceland is gloomy.” Could the gloom she feels be the overcast morning? Because Iceland looks like the moon? Our guide’s anecdotes of disaster: eruptions, floods, death, and even financial collapse? I don’t ask.
I hope Veronica also absorbs the stories of resilience, ingenuity and renewal.

As we approach the lagoon. Helgi Jón says, “I’ve seen Jökulsárlón change in my monthly visits over the last two years. The glaciers are getting smaller and thinner. The lagoon gets bigger,” he says. He calls the glacier retreat “horrifying.”

We’ve reached Jökulsárlón. Veronica is fiercely independent and runs out the bus door. I chase her. The blue ice cream lagoon shines.

Far from us is the jagged glacier field of crackly blue ice. In front are icebergs: small, tall, wide, sharp, icy and stripy. One looks like an alligator. Snow crystals, like tiny mirrors, reflect light and create colours. Deep sky, powder, indigo and Prussian blue: many of the 62 shades of blue. The icebergs are also snow white and contain raven black—ancient volcanic ash runs through them.

Veronica and I slide down the hilly snow-covered moraine beside the lagoon. Zack tries it but flies down an odd-shaped snow patch and hits rocks, ripping his snow pants. All the while he’s on his phone with his mom in Australia.
Jökulsárlón is about 80 years old. Breiðamerkurjökull, an outlet glacier of Vatnajökull, began to retreat in the 1930s, birthing the lagoon. Jökulsárlón has expanded a reported four times since the ‘70s, its icebergs melting or floating out to the sea.

Everything changes over time and Veronica knows about ice ages from the animated Hollywood ‘Ice Age’ films with their relatively happy endings. I share with her that change is constant; climate shifts naturally but also unnaturally.

I ask our guide if he thinks humans contribute to global warming. “I think everybody agrees that we have something to do with it. The curve of the last 30 years tells us that. I’m afraid our children and grandchildren will probably experience difficulties,” he says.

We are amidst something powerful and portent. Why are beautiful things often tragic?

I ask Veronica how she feels about the ice melting.

“The winter is quite warm this year. With climate change comes birds and insects. Trees and vegetation grow better and faster than before,” says Helgi Jón.

He anticipates future disasters but like me, believes citizens and politicians can make change and new clean technology can help. International cooperation will be crucial.

The positive thing about youth (or youthful thinking) is their hopefulness and playfulness.

It’s Tuesday at sunset, we’re back on the bus. The Australians request Helgi Jón stop at the Vínbúð (liquor store) so they can grab a bottle. He laughs, “There is a state monopoly on alcohol sales. It’s closed.”

Helgi Jón spontaneously shares Iceland’s history of alcohol, including universal stories of its misuse. Beer arrived here officially in 1989, we learn. Iceland is a young country. 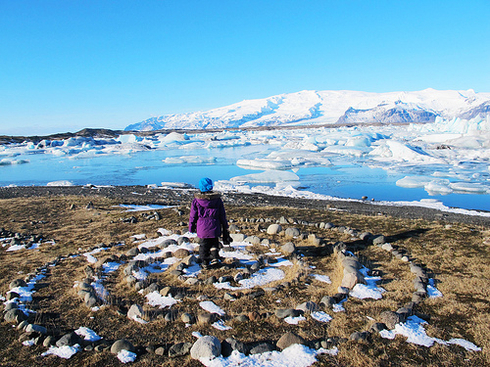 It is dark in Reykjavik. No chance of northern lights. C’est la vie. I don’t have beer, but enjoy a quick Katla vodka (named after Katla volcano) with “the teens” at the Kex Hostel. The Kex is a cool, cosy former biscuit factory. Veronica dreams away, exhausted from this Extreme Iceland tour.

What’s extreme about the voyage depends on one’s willingness to soak in nature’s offerings and truths. You can climb over the moraines and shout out how precious it is, or sit and watch the icebergs. ‘Glacial’ pace has new meaning.

The Icelanders I met respect nature. They have to. Who doesn’t?

I ask Veronica, “Do you still find it gloomy here?”

Veronica is writing in her journal. I peek, wondering if I’ll read her wisdom about the environment. She’s written, “Doors are hard to open and close in Iceland.”

But she tells her dad on the phone, “I want to use the car less and turn off the lights to try to stop the ice from melting so when I come back in 2043 the lagoon might be here.”

On the old metallic elevator wall in the Kex lobby, Veronica is spelling something with the scattered magnetic alphabet letters. “ISLAND IS HAPPINESS.”