A Quick Journey Of Music And Hannes Hafstein

The stately building at Grundarstígur 10 in Þingholt, one of Reykjavík’s most charming neighbourhoods, was basically a palace at the time it was built in 1915. From its south facing windows one can see an older house by the next street, a two storey timber house, which was called “the block” at that time, as it soared high over the turfed roofs and little huts which were most Icelanders’ homes one hundred years ago. Yes, we were a little behind when it came to architecture as Iceland has been relatively poor for most of its existence (save for a spell in the ‘00s).

Hannes was a pioneer in his time, and was in a position to set an example of how a decent home should look like. All in all, four floors including basement and loft, the house has incredibly thick outer walls and almost everything is made of concrete, the staircases as well as the balconies. The inside is bright and spacious thanks to large windows with pretty paintwork and decorative plaster mouldings in the ceiling are testimonials of meticulous craftsmanship.

Filling the gap in Reykjavík’s history

Although the house was lived in until 2007, it sorely needed maintenance when a group of idealists decided to buy the house for the sake of its history. During its renovation, they made sure that several details were preserved and where changes were necessary, they made sure to have them align with the original designs.

The Hannesarholt non-profit organisation was established and the house opened to the public last February. The organisation’s goal is to honour Hannes’s memory and commemorate his contribution to Icelandic society. Ragnhei›ur Jónsdóttir, one of the owners, says they want to introduce Hannes Hafstein to both Icelanders and foreigners, as well as enlighten them about Icelandic cultural history as there’s a gap in our architectural and economical history. “There’s a slight gap in Reykjavík’s history that people are vague about. We know everything about the turf house culture but then, as if suddenly, Reykjavík had several stately buildings and proper streets. We want to educate people and honour pioneers such as Hannes who contributed so much to changing this town.”

Anyone curious can explore this beautiful house and learn about its history as well as Hannes Hafstein. Inside is a café that sells light lunch and dainty cakes to enjoy with coffee or tea, which comes in elegant, old-fashioned china. Upstairs is Hannes’s study and a few pieces of vintage furniture that give an idea of what the home of his family looked like. In the loft are old toys and a little den for children to read. The organisation has high hopes and plans of teaching children about the past through play, where they can amongst other things play with paper dolls from certain eras and read about what their lives would have been like in the time of Hannes Hafstein.

But it’s not only the youth that can learn about the past at Hannesarholt. Young history student Marinella Arnórsdóttir offers guided tours in English on weekdays, at 9:45 or by arrangement via phone. Starting at Hannesarholt, she tells stories about the house and its surroundings while walking around the oldest part of Reykjavík, revealing what the scenery was like a century ago. And in the spirit of Hannes Hafstein, Marinella doesn’t let the weather stop her but offers tour guests sturdy umbrellas, designed to endure Icelandic weather, with Hannes’s famous line “I love you, storm” imprinted on their rims.

The Origin of Icelandic Popular Music

The tour can include a lunch in the Hannesarholt café or a short film about Hannes, in English, shown inside the underground music hall, which is a new extension to the basement of this historical house.

And that’s where magic happens on Mondays at 17:00, when various musicians take turns leading the audience through Icelandic music history in a 45 minute journey, which is offered in English as well. Each musician has his or her own way of presenting what they consider the gems of Icelandic popular music but it is pianist Kristján Hrannar who gives me a taste of what music he cherishes most the very Monday afternoon that I visit.

“In-between songs, I tell the story of how popular music developed in Iceland and what identifies it. I also go quickly through the traditional song melodies which all have similar structure because they’re basically composed for Icelandic poetry. The chords are rather basic even though the melodies are astonishing,” Kristján says. “Icelanders got into jazz music in the 1940s and that’s when the traditional song melodies started changing. In effect, the first Icelandic jazz tunes are heavily influenced by the traditional popular songs.”

He then goes onto the rock ‘n’ roll era and everything that followed, the ‘80s and ‘90s in music, ending with an example of the latest Icelandic music which he states is “of such high quality but still so unique in an Icelandic way, like the lopapeysa!”

On Hannesarholt’s website it says that upon entering this historical building, it’s as if the house embraces you and that one’s heart rate slows down inside its serenity. “We want to offer people to the past’s embrace with us, slow down, look back and try to remember where we’ve come from.” And that’s exactly the palpable spirit of this house; it tells you a story if you stand still for a while, quiet enough to listen. 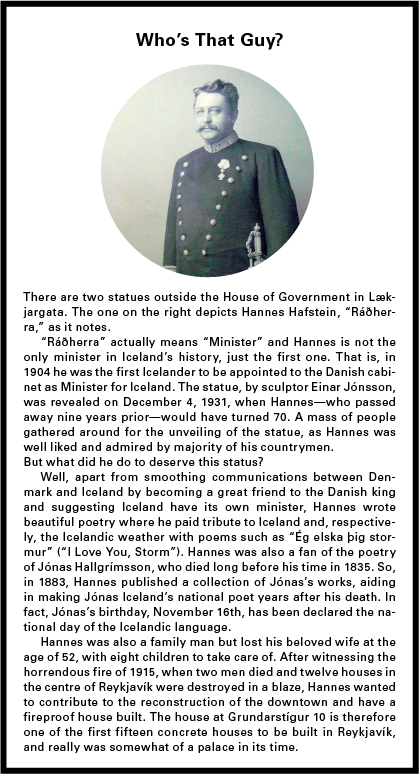 The Hits and Misses of Dining in 2022

Iceland Disconnected: What if our submarine cables went bust?