The Watchdog That Didn’t Bark

The media is often recognised as the fourth branch of government sitting next to the executive, legislative, and judicial branches. Recognising its importance in 1787, United States Founding Father Thomas Jefferson said, “were it left to me to decide whether we should have a government without newspapers or newspapers without a government, I should not hesitate a moment to prefer the latter.”
If fulfilling the role of the 4th branch was the goal, then Iceland’s two most widely read newspapers, Fréttablaðið and Morgunblaðið, by and large failed to fulfil their duties before the crash. On the contrary, the papers often served as a mouthpiece of the government and financial institutions, through which they spewed positive propaganda to the public. Although, for example, Morgunblaðið’s editor at the time, Styrmir Gunnarsson, claims the paper, “adequately evaluated external news and information [before the crash],” an examination of what the newspapers had in their hands in terms of external warnings and what they then passed on to the public reveals a serious lapse in journalism.
Before the crash, external agencies like Moody’s, the OECD and Merrill Lynch, consistently issued reports warning about the enormity of the commercial banking sector and the absence of a lender of last resort. Each time, the newspapers remarkably minimised their reports and ignored or refuted any critical information about the banks.

On April 9, Moody’s issues its annual report on Iceland, reiterating its
decision to downgrade Iceland’s banks to C- and lower the government’s
rating to negative in February and March, respectively. 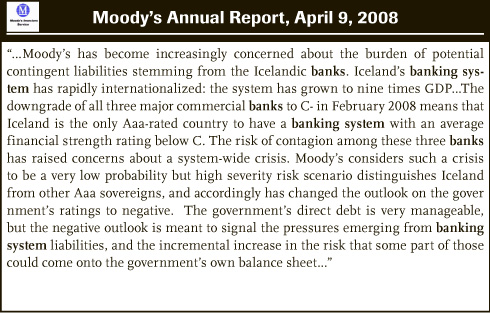 Morgunblaðið says crisis is unlikely.
On April 9, Morgunblaðið reports, “New Moody’s report says crisis unlikely.” At once the headline sums up a rosy conclusion of a report from an agency that has recently downgraded Iceland’s banks to C- and lowered Iceland’s outlook to negative. The article begins by stating Iceland’s exceptional quality in being the only Aaa ranked country with C- ranked banks, as if this was almost a good thing. It goes on to say, “the state of the banks is said to be concerning, but it’s unlikely that they will be the cause an economic crisis.” Additionally, it reports, “Minister of Finance Árni M. Mathiesen says discussions during the last two to three weeks have been moving in a positive direction. Moody’s is very well acquainted with the country and their positive report should push discussions in that direction.”
Thus, it’s generally a positive report.
Morgunblaðið fails to mention that the banks are nine times Iceland’s GDP, and does not include Moody’s warning: “The banking sector in Iceland represents the most burdensome contingent liability. Moody’s considers the three large commercial banks in Iceland as “too big to fail,” a concept that is not affected by the banks having been fully privatised, meaning that we would expect a very high degree of systemic support by the Icelandic authorities for the banks in the event of a stress situation. Given the scale of the banks’ international operations, however, any systemic threat would prove extremely costly to the government if that eventuality were to materialize.”
Of course if they had included all of this, the Minister of Finance would have appeared incompetent and they couldn’t have written up such an overwhelmingly positive interpretation of the report.
Fréttablaðið says speculations are ridiculous
On the following day, April 10, Fréttablaðið covers Moody’s report in an article called, “Ridiculous speculations.” The article begins by quoting Prime Minister Geir Haarde who dismisses speculations that Iceland could run into insolvency problems and says, on the contrary, “exports are increasing, the trade deficit is decreasing and the state of the banks is strong.” Yes, he said, “the state of the banks is strong.”
Then, selectively paraphrasing from Moody’s report, the article says, “Moody’s believes Iceland will come out better than other countries with the Aaa rating and countries with this rating can easily shake all kinds of economic difficulties.”
Did Fréttablaðið not find Geir Haarde’s statement, “the state of the banks is strong,” preposterous after reading Moody’s report, which clearly expresses concerns about the banks? Perhaps they did not read the report. At least that would explain why they fail to point out that a high severity risk scenario makes Iceland different from other Aaa countries and that Moody’s is “increasingly concerned about the burden of potential contingent liabilities stemming from Icelandic banks…the system has grown to nine times GDP…the risk of contagion among these banks has raised concerns about a system-wide crisis.”

On June 6, The Organization for Economic Co-operation and Development
(OECD) publishes its Economic Outlook report for all 30 member
countries, specifically pointing out that Iceland’s banks may have grown
too large to be bailed out if that becomes necessary.

During the majority of June and July, Morgunblaðið and Fréttablaðið ran stories about the króna reaching an all time low as well as the rising inflation figures and predictions from the Central Bank that their target inflation rate would be reached. Yet, there was little discussion in either paper regarding the status of the banks and the absence of a lender of last resort if the banks were to default, until Merrill Lynch published a report on July 24.

Fréttablaðið says the government is ‘surprised’
Covering the report, Fréttablaðið prints a front-page article on July 26, “Intervention necessary,” which continues on page 12, “Wishful thinking and pious words aren’t enough.” The article begins by reporting
that Richard Thomas from Merrill Lynch believes government intervention is necessary in today’s economic situation and questions whether Iceland is not in a similar situation to the US and Britain.
This is of course followed by a quote from Minister of Education Þorgerður Katrín Gunnarsdóttir who says,“Such a comment speaks for itself,” and questions Richard Thomas’ motives.
Furthermore, Fréttablaðið reports that Minister of Business Affairs Björgvin G. Sigurðsson is astonished at Richard Thomas’ criticism, and claims the government and financial sectors work well together (note the irony here! In the Special Investigative Committee’s investigation into Minister negligence, it turns out Björgvin was actually never invited to any financial meetings before the crash. Yet, here he claims the government and financial sectors work well together).
The article continues on page 12, mentioning Richard Thomas’ rule of thumb: “As the CDS of a company trades north of +1,000bps, the market is stating that it expects a default. Both Kaupthing and Glitnir are
currently trading in that area.”
This is good and well, except Fréttablaðið then adds, “Thomas says the actual state of the banks are fine,” rather than “It is time to consider whether or not we will see a default from these banks,” which is what actually came next in Richard Thomas’ report.
Morgunblaðið has no comment
Morgunblaðið did not have much to say about this one.

Despite countless warnings about the bank’s size, the Financial Supervisory Authority (FME) conducted a Stress Test on August 14 to see whether the banks were in a position to take on considerable financial shocks and the banks pass with flying colours.

Morgunblaðið takes their word for it
On August 15, Morgunblaðið reports, “State of the banks is strong and they can withstand significant shock.” The coverage is quite basic and matches the FME’s press release very closely. In fact, the article includes a quote from Icelandic FME director-general, Jónas Jónsson, which was simply lifted from the press release, although not sourced that way: “The results from the stress tests indicate that the capital ratios of the banks are solid and can withstand considerable financial shocks.”
Morgunblaðið does not delve deeper into the issue and fails to ask questions of the FME, such as how the C- ranked banks passed their stress tests despite receiving negative rating after negative rating from external rating agencies. They simply take their word for it.
Fréttablaðið also takes their word for it
Fréttablaðið reports, “Withstand FME Test.” Although Fréttablaðið provides coverage beyond the press release and points out that the tests don’t apply to the smaller banks, it does not question the conclusions of the test. The FME, despite being charged with the supervision of the banks, may have decided that it was to the benefit of the banks to boost trust and it is not difficult to imagine their motivation for positive PR at the time. However, a good watchdog tracing the scent from one negative rating to another would definitely have done some barking here. But, no questions were asked.

Why didn’t the watchdog bark?

Less than two months after Iceland’s three largest banks pass the FME stress tests, in October 2008, the banks defaulted, the stock market crashed and people lost a lot of money (and eventually cars and houses). After looking at the evidence, there’s no question that Morgunblaðið and Fréttablaðið missed some blatant warnings about the banks, their enormous size and the absence of a lender of last resort. But, why?
Morgunblaðið journalist Bjarni Ólafsson, who wrote the June 5 article, “No crisis in auditing,” says he can’t remember how he came to write the story, but says someone from one of Iceland’s banks likely contacted the paper to suggest it. In the SIC Report, Morgunblaðið editor Styrmir Gunnarsson says Glitnir Director of Sales and Marketing, Birna Einarsdóttir, called Morgunblaðið up and said, “You are supposed to stand with us.
You are not supposed to criticise and comment on the banks, you are supposed to stand with us.”
Friðrik Þór Guðmundsson, who is among the authors of the SIC Report’s chapter on the media, says there are probably multiple reasons the media didn’t report the warnings from external agencies like the OECD. For one, he points out that many journalists go on vacation over the summer and thus issues related to the banks and the economy are put on the backburner. However, he thinks perhaps the main reason is that people wanted to believe everything was okay.
That’s no excuse. To borrow words from Davíð Oddsson, of all people, “It’s extremely important that the media fulfils its supervisory role, both attentively and responsibly.” Woof!