By one swift, decisive act, it has paralyzed Europe’s airline industries for almost a week, delayed 64 thousand flights (and counting), affecting millions of travellers, reminding a whole continent that geography and distance still exist, while lessening the airlines’ carbon footprint by an amount equal to the annual output of several smaller states combined, and possibly hindering the meagre 1% economic growth expected in the EU zone in 2010. Surely Eyjafjallajökull (“Ay! You fergot la yoghurt!” or just EJ for short) is an anarchist.
In the severely underreported student uprisings throughout California last October, one of the novelties in their published materials was the declaration, rejuvenated from the sixties, to ‘demand nothing’: occupying and paralyzing universities throughout the state the students declared they made no particular demands, no structural reforms: ‘a free university in the midst of a capitalist society is like a reading room in a prison; it serves only as a distraction from the misery of daily life.’  (Communiqué from an absent future” After the fall – Communiqués from Occupied California). Published February 2010). Instead, paraphrases the volcano, we seek to channel the anger of the dispossessed tourists and airline workers into a declaration of war.
Now, sorry for the harsh interpretation – it was the radical students in California who spoke of war, and went surprisingly unnoticed by the global media. EJ is far more sophisticated in its approach, not saying a word, so not a word can be misinterpreted. As is quite evident from its course of action it means no harm to people. This is a precise operation, designed for maximal effect in the following three ways:

All this amounts – or so the theory motivating the volcano obviously goes – to a wake-up call.
In the face of that wake-up call, the volcano would hope that collateral damage, such as underpaid workers in Kenya, in the UK and elsewhere losing their jobs, will channel their frustrations into a demand for radical change, a system sustainable to humans and the rest of life, that would make livelihood and human dignity independent from whimsical market conditions and unsustainable means of travel.
As other anarchist activists before it, the volcano does not reveal its face – even underneath the hood of its smoke it shows only a mask, its three craters resembling a distorted version of Munch’s Scream, according to some interpreters. Having no particular face, no identifiable person or organization behind it, the volcano stays out of reach of counter-strikes or retaliation. Unlike, for example, France’s Tarnac 9, the group of young anarcho-communists who in 2008 were arrested on the basis of suspicion that they had written The Coming Insurrection (officially written by ‘the Invisible Committee’, available in English translation here) – a booklet urging action to interrupt the flows of capital more or less precisely the way EJ currently does, though never hinting at any action of such volcanic magnitude.
For those interested in events, the eruption is already far more interesting than parliament’s 3,000 page report on Iceland’s financial crisis, or even its appendix on ethics. There are those who would like to see the volcano as a mercenary mountain on the state’s payroll. They cite the fact that the Nordic heathen society’s high-priest and Sigur rós collaborator, Hilmar Örn Hilmarsson, did invoke a curse against the UK and Holland for the unsettled IceSave accounts, over a year ago. After the ritual he concocted this rhyme in English:

“In London town this lying clown
our land he drowns and shatters.
Gordon Brown is going down,
his good renown in tatters.”

Proponents of this theory will also find support in the fact that the €200 million losses that the ashes cause the airline industry alone – daily – already amount to approximately the whole unsettled IceSave debt. This, however, is merely so much nationalist propaganda, belittling the autonomy of independent actors and thwarting the volcano’s more radical and far-reaching agenda under a screen of natural mysticism and foreseeable over-interpretation of coincidence. No, this mountain may address all those who hear it, but it acts only in its own name, in defiance of all hierarchies and orders, a defiance underlined in the details of its calculated side-effects: deployment of arms to Afghanistan gets delayed, while soldiers on their way back home on leave make a detour on train and ferry.
The event is ongoing and remains open for interpretation. Perhaps come next week, it will not be amusing at all. Geologists tell us nothing about what lies ahead, but musicologists insist that if this piece is composed, the first two acts clearly have the structure of a prelude and there must be more to come. Behind the corner the more easily pronounceable Mt. Katla lies dormant, less of an anarchist, more of a potential Stalin, purges and all. Its eruption might mean the end of Iceland. Last time it erupted it meant the end of monarchy in France, which most of us have come to appreciate.
Not that being stuck with your family for an extra week in Tenerife is any laughing stock, let alone calling out the Navy for your rescue. – Googling “I hate Iceland” already gives 147,000 results, dwarfing “I love Iceland” and it’s meagre 46,000 hits. Then again, anarchists have never really been strong in popularity contests. As of yet – unlike September 11, 2001, the last time airlines got interrupted on a comparable scale – this catastrophe has not become a deadly one, and the activist volcano shows no sign of fascist tendencies. The event remains nearly as virtual as a computer meltdown – and its potential just as real. As long as that’s the case, I feel mildly proud of my place of origin. Never mind the people or its politicians: this tectonic intersection is intelligent and daring. 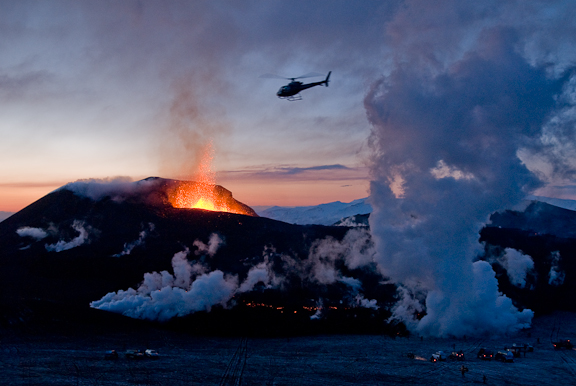