Unlike traditional galleries, Muses has no brick and mortar structure, and instead exists completely online at Muses.is. Rakel Sævarsdóttir, who has a background in art theory and a Master’s degree in communication, began building Muses with the help of a programmer in 2009 while she was on maternity leave. She began contacting artists and a year later, in 2010, the site was launched and in 2011, she put on the first pop-up show. “The idea is to display the art online and then enhance it with these pop up exhibitions,” Rakel says.

Today, 20 artists are members of the Muses collective, many of whom have been personally recruited by Rakel. Their styles range from classic oil paintings to street art to mixed media.

“My focus was first off all, young up-and-coming artists with different styles,” Rakel says. “So you’ll see an artist doing traditional painting alongside another with a background in street art who hasn’t been to traditional art school who is doing interesting things.”

The art of management

Muses also handles what many artists consider the less glamorous side of being an artist—the business aspects. Rakel handles everything from scouting locations, to promotion to curating the show. She also helps maintain the website, where each artist has his or her own profile, digital gallery and links to purchase dozens of original paintings, drawings, sculptures and prints. She takes commission on any sold works, and artists also pay a small fee to participate in the pop-up shows.

“I think self-promotion and marketing is actually an artist’s worst nightmare,” says Víðir Mýrmann, an artist who specialises in oil paintings and showed his work at the most recent pop up show. “To put a price on your work, it’s a constant headache for artists. I just want to spend my days in the studio, working on my paintings and don’t want to really think about the other things.”

Apart from Muses, many of the artists also host their own shows and promote their own work, and none of them are exclusively managed by Rakel. However, having Muses on their side has made breaking into the art world easier for some.

“To physically go somewhere with a huge portfolio and be like, ‘Hi here I am!’ Trying to sell my ass; it’s difficult for me,” says Sylvía Dögg Halldórsdóttir, an artist who works with mixed media and also showed work at the most recent pop-up exhibition. “This is more comfortable.”

Not being tied down to a space gives Rakel the freedom to hold shows wherever she wants. The most recent one in the Höfðatún building was an art show in the sky, with sweeping views of downtown Reykjavik serving as a backdrop for the sleek, simple show. The location of the shows becomes part of the allure, and being 19 floors up in one of Reykjavík’s tallest buildings, it’s easy to see why: the venue becomes part of the installation.

Locations for past shows have included abandoned industrial areas, an old fish factory and a soda factory. Rakel says these places can also be more inviting to people, as they aren’t as formal as traditional galleries. “I want to bring the art closer to the public,” Rakel says. “Some people find it a bit overwhelming, to go into this white cube, like going to church or something.”

That’s not to say that sometime in the future Muses won’t branch out and have a physical gallery. Rakel briefly opened a small space on Laugavegur with two clothing designers, but the space didn’t last more than three months. “It’s just a fact that running an art gallery is expensive,” Rakel says. “So I just decided that I was going to develop it online and work on these pop-up exhibitions. But of course hopefully we will have some kind of space for people to come.”

Until then, Rakel has been working to make Muses as accessible as possible. The site is available in English and Icelandic, and because of a new collaboration with an art historian from the Czech Republic, there are plans to translate it into Czech as well. The collective has also received invitations to host shows in Austria, Czech Republic and Denmark.

“There are so many ways that we can make art visible,” Rakel says. “We don’t have to take some painting and fly it across the world; we can do a lot of things here.” 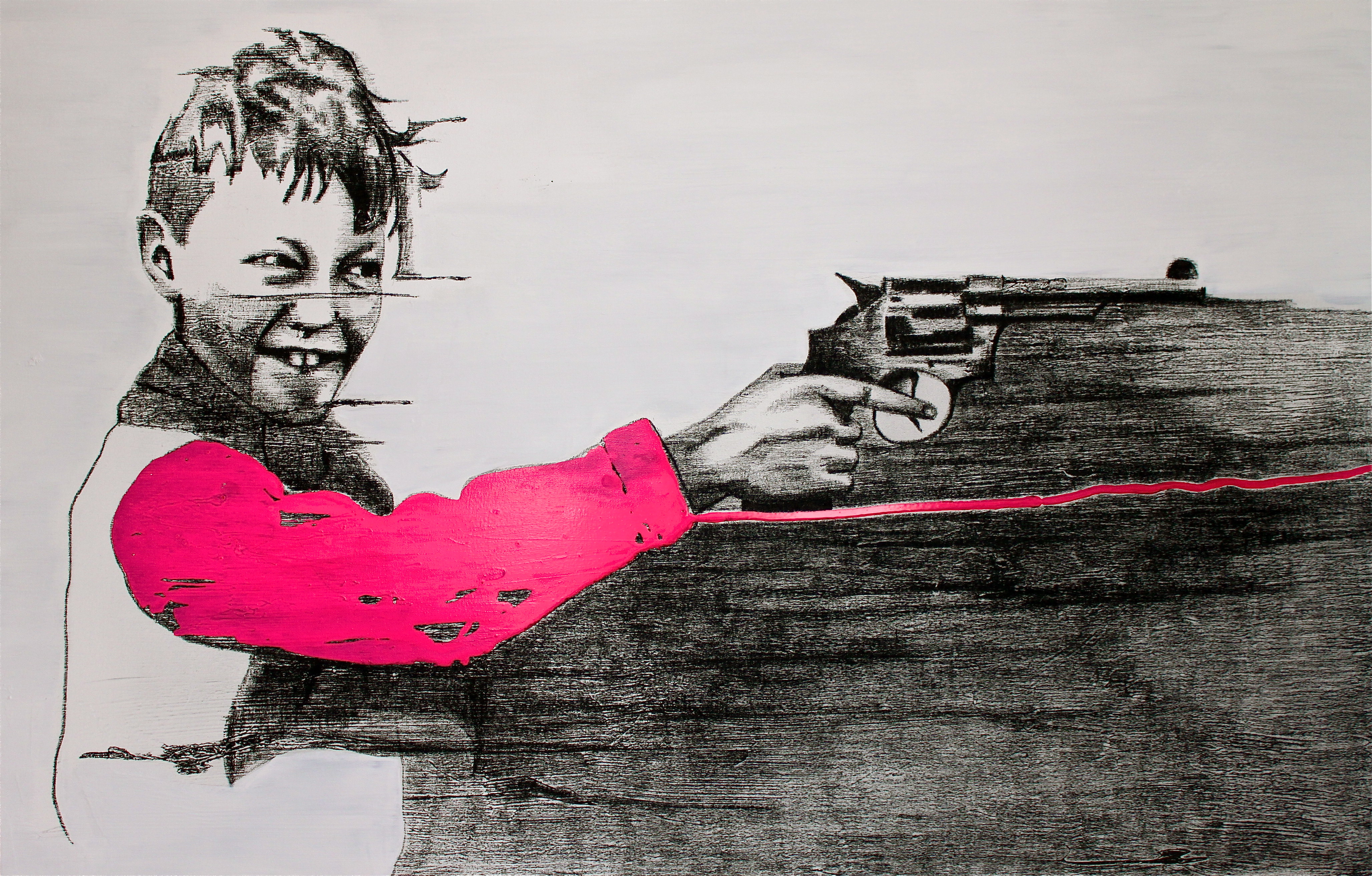 For a tiny island nation that doesn’t even have a national army, “war” is something that happens overseas. However, artist Sylvía Halldórsdóttir, who has been part of Muses since 2011, is bringing the realities of conflict a little closer to home.

She began focusing on war imagery after spending time in Holland as an art student in 2003. While she was going to school, she watched as young soldiers were deployed to aid US soldiers in the invasion of Iraq and Afghanistan. It was an especially striking experience for her, being born and raised in Reyðarfjörður, a small town in eastern Iceland.

“It was really weird finding myself in a big city, in a different country, where you had young people going to war. Every time I went to the train station, I could see young people all suited up, ready to go,” she says. “I had never seen anything like that before.” At the time, she was also keeping up with news and current events for a newspaper column, and she was struck by the gruesome realities of war: mothers losing children, nations losing their young people and innocent civilians dying in the crossfire.

It was this that led her to adopt the artistic identity she paints under today: Lovetank. “I started out in Holland painting images of victims and objects of war, and from there I painted my ﬁrst Lovetank,” she says, describing original as a large black tank made from a pattern of hearts with a soft pink background.

Slyvía’s work ranges from paintings to mixed media pieces, and although she often uses bright colours, she says she doesn’t paint to simply make pretty pictures. Sometimes her imagery can be tough to swallow.

“People have told me my work is beautiful but some of it can be tough to look at,” she says, pointing to a massive canvas behind her, which features a woman cloaked in a black hood with a pained expression, set against a has a blood red background. Slyvía explains that it was inspired by a photo of a woman whose son had died in battle.

“People don’t want to look at bad things, they want to look at happy things—things that make them feel good. My paintings tend to be happy colours, but kind of dark imagery.”

Go check out Muses at www.muses.is!