Fish In The Sky

“To actually cease being a child, that’s probably the greatest experience in life.” So thinks Josh Stephenson, the unusually sensitive and observant teen narrator of Fridrik Erling’s ‘Fish in the Sky,’ a recent English translation of Sveinn Ólafsson’s ‘Góða ferð, Sveinn Ólafsson.’ Josh has just turned thirteen and, according to his mother, is “one year closer to being considered a grown-up.” But getting older isn’t helping Josh make sense of life—it only seems to be complicating things.

Like most thirteen year olds, Josh occupies a purgatory somewhere between innocence and worldliness, regularly bouncing between pure joy and deep despair as he tries to navigate the seemingly insurmountable problems that crop up around him. First, there are his parents: his mostly-absent father who spends nearly all of his free time with his girlfriend or drinking buddies and his ardently religious mother who is too exhausted from working two jobs to pay much attention to his problems. Added to Josh’s list of worries are his rebellious older cousin—a girl—who moved in with Josh and his mom and is living in his closet, a vindictive math teacher, humiliating gym classes, the possibility that he has fallen in love, and the horrifying fact that he has started to get pubic hair. “I’m like a piece of bread in a toaster,” he thinks. “No matter which way I turn, all around me are the glowing iron threads that heat me up until I start to burn around the edges.”

Fridrik captures the profound extremes that characterize adolescence with a balance of poetical empathy and sly humour, all delivered through Josh’s sometimes wry and often perplexed observations. Of an irritating but popular classmate, Josh reflects that “It is unbearable how shameless and disgustingly free of low self-esteem he is.” While guiltily thumbing through a nude magazine he admits to finding “…at least two really hot descriptions of copulation,” which he doesn’t entirely understand. There is self-awareness and self-depreciation in Josh’s flailing attempts to reconcile with the world around him that ring very true to the teenage experience.

Although he spends most of the novel navel-gazing, Josh does undergo a significant transformation in discovering the simple truth that everyone has problems (many of which are more serious than his own), and everyone feels alone in them. The universality of this theme is further underscored by the fact that in the English translation, ‘Fish in the Sky’ has very few orienting details that identify it as occurring in a particular country or even a particular time period. It’s worth noting that Fridrik completed the English version himself with reference to a translation by the late, great translator Bernard Scudder, to whom he dedicated the book. All of the character names have been anglicised, and while certain small details may hint at the original version’s Icelandic origins, it stands as a story that could have happened anywhere, to any young person.

Over ten Icelandic novels have been translated into English in 2012, as compared with the seven Icelandic titles which were published in English in 2009, 2010, and 2011 combined. This boost in English translation reflects a renewed international interest in Iceland’s contemporary literary scene: in 2011, Iceland was the guest of honour at the Frankfurt Book Fair and Reykjavík was named a UNESCO City of Literature—the first city awarded in which English is not the native language. In the same year, AmazonCrossing—the American retail giant’s new literature-in-translation press—committed to publishing 10 new Icelandic novels in English translation over the next few years. 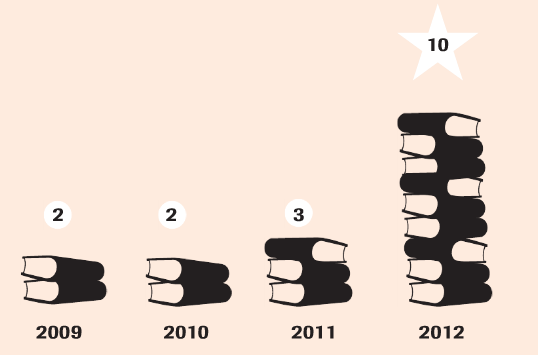