Down The Rabbit Hole: Leiðarendi Cave

Stuck in a crawl space less than a metre high while on the verge of a claustrophobia-induced anxiety attack is perhaps not the most ideal situation to find yourself in while vacationing. That is, unless this space happens to be in a mind-blowing lava cave just outside of Reykjavík, Iceland.

On the short 25-minute drive to Leiðarendi cave, our guide Mike told me about all the unusual and striking formations that appear in the caves here, and speculated about the hundreds of miles of underground caves that remain undiscovered in Iceland. However, I didn’t entirely grasp what he was describing until I witnessed it firsthand.

We pulled up to our destination and proceeded to listen to safety instructions. From there, the cave was just a short walk through a field of lava rocks overgrown with moss and surrounded by snow-covered mountains, the quintessential Icelandic landscape. When we arrived at the cave, I saw that the mouth of it was largely frozen over with snow and ice. As we stood around the entrance, I was reminded of the classic literary theme in which characters like Don Quixote descend into caves, inevitably undergoing some sort of transformation before they come out.

Upon entering the cave, we were greeted by tubular lava stalactites that spanned the ceiling for as far as my headlamp illuminated, and a series of magnificent oversized and menacing icicles. These icicles, coupled with a beautiful, bizarre, glowing fungus on parts of the cave roof made for quite a dramatic and picturesque display.

Chains and boundaries marked off parts of the cave to prevent visitors from damaging some of the brilliant and dazzling underground phenomena including miniature towers called stalagmites rising from the floor of the cave. These boundaries, however, didn’t stop someone from taking the cave’s largest stalagmite. “I guess somebody thought it would look better in their living room than here in the cave,” Mike said. What a shame.

Deep into the cave, we came to something of a resting place and everyone took a seat. Mike claimed we were going to attempt to make “the world’s darkest space,” and instructed us to power off our headlamps and cameras. I waited for my eyes to adjust to the darkness, and then I waited some more. I opened my eyes as wide as I could to try to see a shred of anything. I waved my hand in front of my face and then held it there. Nothing. Absolutely pitch black.

If you managed not to panic or lose your mind, you might consider this the best part of the tour. I lay all the way down on the cave floor, trying to decide whether or not to have my eyes open or closed, but of course it didn’t matter. I felt my sunglasses in my pocket and laughed to myself. And then I stopped. Nobody was talking, but it wasn’t silent. The water dripping monotonously from the roof of the cave was getting louder and louder, almost beginning to hurt my ears. The previously unnoticed, dank smell of volcanic rock also quickly became apparent, and the 1˚C temperature of the cave’s interior forced me to zip up my jacket.

When light stops sending information to your brain, it’s remarkable how quickly the strength of your other senses kicks in. It’s also amazing and somewhat strange to think that these geological processes and stunning formations in the cave are created and exist in absolute darkness. This part of the tour was indeed my favourite, truly calming and ironically “eye-opening.”

Five minutes of this was all it took to completely relax me, and then we continued on with exploring as our headlamps flooded the cave with light again. We arrived at a fork in the cave tube, which Mike explained was an alternate way to reach the exit. Although in parts of this alternate route there were some tight squeezes and some rough terrain, Mike assured us that the structures we’d see would certainly be worth it. Having had some claustrophobia issues in the past, I was hesitant to go ducking and crawling through ten meters of tight, enclosed spaces, but for the most part, I was able to remain calm. 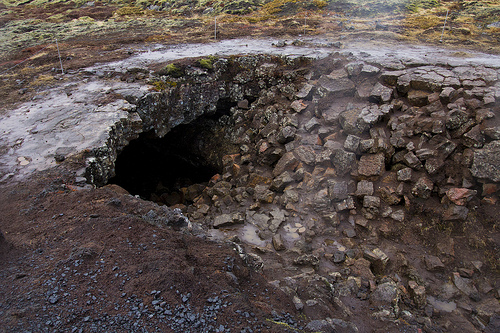 I climbed out of the cave, slipping a few times on the thick layer of ice coating the rocks. Now there was rain, bright light, and huge mountains surrounding me – a completely different world from the one I had just explored. Although I don’t feel like I underwent any kind of transformation underground like Don Quixote did in the Cave of Montesinos, I did feel a little more observant and my mind was at peace. After leaving the bizarre, spectacular cave formations behind in the dark, I was grateful to have experienced a part of Iceland hidden from those who aren’t looking for it.

Visit Arctic Adventures for information about booking this trip. 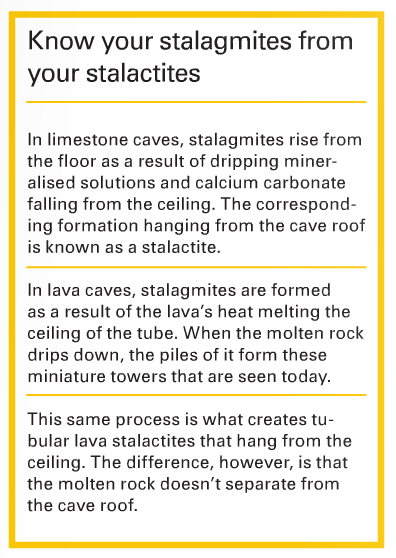 Major Damage Was Done Due To Stormy Weather

The Angró House To Be Moved To A New Location

Ask An Expert: Why Are Icelandic Houses So Colourful?