Home To The Loneliest Hotel In The World

Djúpavík, like many places in the Westfjords of Iceland, feels close to the edge of the world. Formerly a busy fishing town, the herring processing plant that dominates the area lies silent, long since closed down. Its oil tanks and echoing halls now stand in disrepair, a rusting monument to an industrial past.

These days, the main focal point of the town is Hotel Djúpavík, with its eight first-floor bedrooms and a cosy dining hall that also acts as a kind of informal history museum. The owners, Eva and Ásbjörn, moved here in 1985, converting the former female workers’ quarters into a homely, secluded stopover for native travellers and international tourists alike. The hotel has proved popular, expanding to take in a cosy cottage that can house a further eight people, as well as a couple of small dorm rooms for those seeking low-budget sleeping bag accommodation. 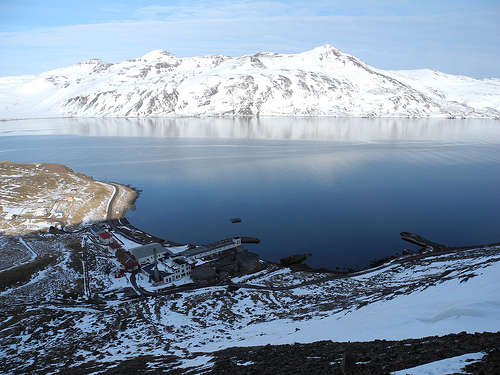 Falling in love, happiness by the sea

We took the trip with Claus Sterneck, a German graphic designer and Reykjavík postman, who has worked at the hotel for eight summers straight after falling hard for the town on his first visit. “An ex-girlfriend showed me an article in a magazine about Djúpavík,” he recounts. “The headline was “the loneliest hotel in the world is in Iceland” with a by-line saying something like “happiness by the sea: anything is possible.” I looked at the picture—the houses and the factory—and I knew I had to go. Two months later, I was there. And I fell in love with it.”

As luck would have it, this was the moment Iceland’s most famous band decided to come to town. Having achieved worldwide success and toured widely, Sigur Rós decided to stage a series unannounced free gigs around their homeland. From these performances came the clips that make up ‘Heima,’ their much-admired live film and documentary, and a powerful love letter to Iceland. “It was just magical,” he says, with a wistful smile, “like all my Christmases and birthdays rolled into one.”

The road into town is little more than a potholed track with a vertical drop to the right—quite alarming as we crunch over snow and ice, descending into town in darkness. After a warm welcome from Eva and Ásbjörn, we go to bed like it’s Christmas Eve, eager to see the glorious Westfjords outside of the curtains in the morning. 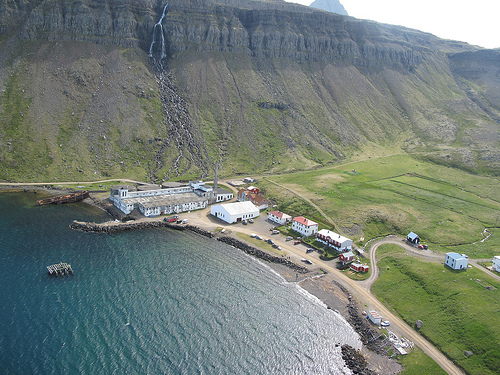 Exploring the coastline, taking a dip

When morning comes, the view is not as desolate as imagined—a line of ten or so hotel guests are touring Iceland on a photography-related trip, and they line the rocky shore in bright all-weather gear. As the sun rises, luminous orange and pink hues catch the clouds and reflect from the snowy mountains below, and they shiver, huddle, and snap pictures of the dynamic, ever-changing view.

One hearty breakfast later, it’s time to venture further north. The road winds just a few more kilometres up the meandering Strandir coastline past a series of farms and sparse summer houses, mostly unoccupied as the bitterly cold autumn sets in. Gjögur is an empty wind-whipped hamlet with rusting, tumbledown boathouses and a lonely crane (“Made In Italy”) creaking on the wooden pier. We pass a tiny airfield, its windsock a rare spot of red amongst the graduating tones of the autumn foliage and icy cliffs. It’s a breathtaking drive.

At the end of the trail lies Krossneslaug, a tiny swimming pool with heated changing rooms and showers—essential for the sub-zero winter months—and a steaming hotpot, all looking out over the choppy sea. The pool has a vivid aquamarine bottom that gives it a feeling of unreality set against the crashing surf and black shoreline. Geometrically odd mountains peek out of the sea in mist, and sea birds screech close overhead. It’s a rare and striking place, and a perfect day trip for visitors even in the dead of winter. 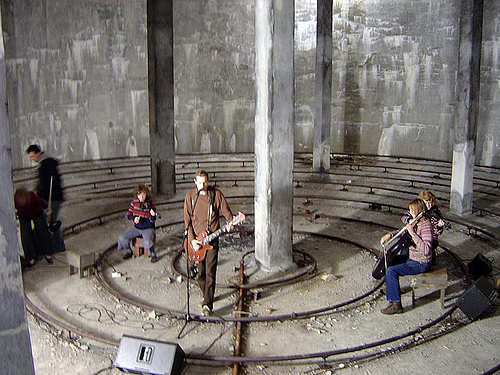 Back at the hotel we dig into a hot dinner and watch the sun silhouette the mountains, before an inky blackness sets in. We sit in front of the hotel for a cigarette, gazing outwards, far away from any streetlights or settlements. All that’s visible from the steps of Hotel Djúpavík are the crests of breaking waves, just twenty metres away, the ocean sound adding to the feeling of deep peace and seclusion that pervades this unique place.

On the final morning, we go into the Herring Factory for a short-guided tour and to snap some pictures. The hall where Sigur Rós played now houses a collection of vintage cars and construction vehicles. The large coal oven that used to fire the plant’s machinery is still, and there’s a lonely beauty in the vast, rusting metal cones, flapping hatches and rickety stairways. We wander through the silently deteriorating bones of the factory, now an immersive natural art installation.

There’s an open round hatch allowing access into one of the oil tanks. Clambering through is like entering a film set, too perfect to be true—a spiral pipe leads to the centre of the round room, and a high single window lets in a beam of pale light. Every footstep creates a deep, sonorous echo that goes on for ages. There’s an affecting holy atmosphere in this most unlikely of places.

Even after two days, leaving is a wrench. Eva and Ásbjörn have made something new of this empty village, and staying at the hotel is like being a guest in someone’s home. It may feel like the very edge of the world, but the lights are still on in Djúpavík. 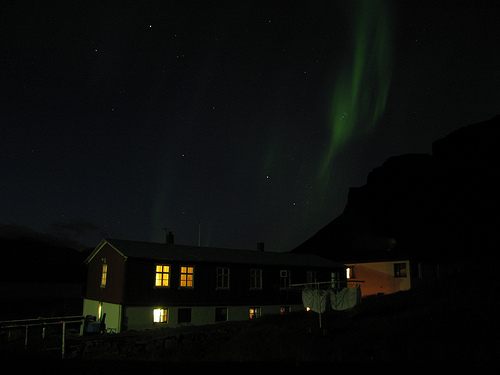 These wonderful photos were taken by Claus, who lives in Iceland. Be sure to check out his website and Facebook page!