Not for your average latté-drinker

Not for your average latté-drinker

“What are all these people doing here?” a guy asked his mate in the fourth row. “Beats me,” he replied, looking up at us as we walked past to find our seats on Air Iceland’s 37-seat Dash 8 bound for Ilulissat.

Home to 5,000 people and 7,000 dogs, Ilulissat in West Greenland is not exactly your typical holiday destination. After all, its only international connection is Reykjavík, which is already in the middle of the North Atlantic—at least five hours from the United States and three from mainland Europe.

From Reykjavík though, it’s just four hours to the west coast of Greenland, an island that looks bigger than Australia on a map even though it is actually three times smaller. It was almost enough time to master some Greenlandic phrases like ‘Timmisartornermi’ (“En route”) and ‘Timmisartup iluani pullanneqassangilaq’ (meaning, yes, you guessed it, “Inflate upon exiting”)—before the plane began its descent on the snow-covered landscape below. “It’s a nice, clear day,” the pilot said, “and the temperature is -28° C.”

It certainly didn’t look warm as we homed in on the area’s claim to fame—massive icebergs jutting out of a frozen-over fjord. A designated UNESCO World Heritage site since 2004, the Ilulissat icefjord is presumably what brings the town’s 36,000 annual visitors to spend time 450 kilometres north of the Arctic Circle. 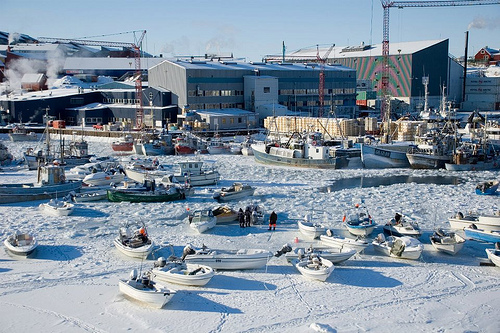 Not until I stepped out onto the tarmac did I begin to understand what -28° C really meant, as my lungs tried to cough out the cold Arctic air.

I would later learn that Ilulissat is blessed with a high-pressure system, which means it is dry. “You leave Ilulissat where -28° C is okay, and you arrive in Copenhagen where it is -9° C and you’re freezing cold,” explained Ole Gamst-Pedersen, a Dane who runs the local art gallery.

But it was still cold enough to freeze the snot deep inside my nostrils and to coat my eyelashes in a frosty white as soon as we ventured outside to explore the town and its colourfully painted wooden houses. The nation-wide aesthetic that is so iconic of Greenland was instituted by the Danes in the early 1950s, long before Greenland would become an autonomous country within the Danish Kingdom.

As our cameras faded on and off, constantly threatening to give up, we took refuge from the cold as often as we could, popping into all of the stores and tourist shops in the downtown area. For such a small town there were a large number of stores with a selection of all kinds of modern conveniences, from soda water machines and fish aquariums to Roombas.

Passing Café Tutu and Café Hong Kong, we went to Icy Bar, a seemingly upscale café serving pizzas, which Ole later told us are the best in Greenland. We sat there for a while watching America’s Funniest Home Videos dubbed over in Danish. After toying with the idea of seeing Django Unchained, the only film being shown at the town theatre, we decided to retire to our hotel, Hotel Icefiord.

There, from our rooms, we watched the sun set over the frozen fjord, the stillness disturbed only by the occasional pair of ravens or gulls flying past.


The Reykjavik Grapevine trip to Ilulissat, Greenland from Reykjavík Grapevine on Vimeo.

We awoke to an equally impressive sunrise, which we enjoyed with breakfast before rushing into town to observe 10 AM mass at a large brown wooden church overlooking the fjord. We took our seats in the back with the families juggling little kids, almost all of them chewing gum—evidently a special treat—which I caught some of them flaunting to kids in other pews.

We went through the motions, flipping a Lutheran bible from one Greenlandic verse to the next. My eyes wandered to the window where I spotted some of our fellow passengers from the flight over, a Chinese painter and his entourage, wandering over to the fjord edge, perhaps scouting for a landscape to put on canvas.

Just when I was getting restless, everyone turned to the back of the church where a husband and wife dressed in traditional Greenlandic garb—the man wearing a white anorak and the woman wearing seal skin bottoms and a colourful beaded top—came walking down the aisle with their newborn, whose baptism we got to witness before going out into our second day in Ilulissat. 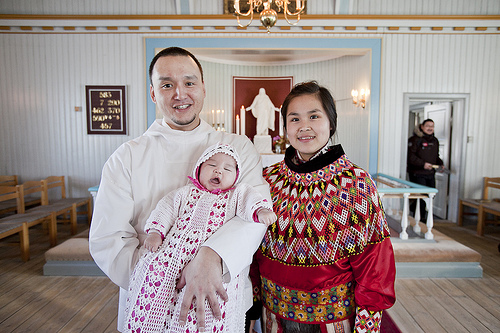 At a tourism office in town we were told that there were no dog sledding or boat tours available to us due to the extreme frost, as most of the town’s fishermen were off fishing for halibut by dogsled, a far more lucrative business than chauffeuring around tourists.

We walked down to the harbour, hoping to convince somebody to take us along, but unfortunately everything was gridlocked and we had trouble communicating—English seemingly as foreign to the fishermen as West Greenlandic was to us. One of them wrote “Atersuit Qaleralinnut, tumimaaíia” in my notebook, which made no sense to me. Unfortunately, Google translate is not yet available for Greenlandic, a language spoken by a nation of 57,000 people.

Roombas but no bananas

Instead of going out to sea we met Ole at the Ilulissat Art Gallery, “a castle compared to the rest of the houses,” as Ole described it, “as it was built to house the Danish colony manager.” Today it houses a permanent exhibition by the 20th century Danish landscape painter Emanuel A. Petersen. “It would have been far too cold to be outside painting in Greenland, so he made numbered sketches and then went back to Denmark to colour them in,” Ole explained.

Ole has been living in Greenland for 25 years now with his wife who runs a reflexology clinic from their house. The last three to four years, he told us they’ve had cargo ships coming in on a weekly basis, but given this sudden frost in March, they hadn’t seen a cargo ship for two weeks. “We were surprised to see one come in last night,” he said. “It was marked Ístak—an Icelandic company.” He said his wife noticed that stores had by then run out of bananas, but grocery stores were otherwise pretty well stocked.

When I wondered what he has been doing here in this town for so many years, he was quick to talk about its natural beauty. “This is a place for people who like to be outside in the nature, people who like to hunt. You’d think you were in Texas,” he said, noting that every household in town has a gun or two. “If you’re interested in sipping on café au lait, you should be in Reykjavík or Copenhagen,” he said. “This isn’t that kind of place.” 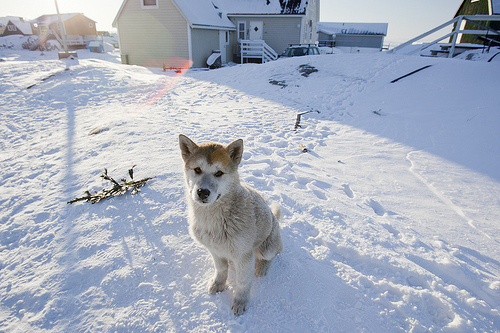 When Ole’s shift ended, we walked over to his house to go meet his dogs, which barked ferociously and lunged at us from their chains. Owners are legally required to keep their dogs chained down, with the exception of puppies, which are free to roam and playfully followed us around town during our stay.

They are working dogs, kept for the purposes of pulling sleds, and they can do that for about ten years before they stop pulling and must be shot, said Ole’s friend David Droob, who happened to sled past us with a Danish couple—a local policeman and a nurse—clad in sealskin from head to toe. Much like there are strict regulations to keep the Icelandic horse purebred, there are regulations to keep the Greenlandic dog pure. “No normal, city dogs, north of the polar circle,” he explained.

For Ole and David, dogsledding is more a hobby than anything else, and neither of them raced in the national qualifying race, which took place just before we got into town. In this region especially, they told us dogsled races are taken quite seriously—it’s like handball to Icelanders, Ole explained.

There were no shortage of dogs in the running, however, as we would see on our last day in Ilulissat. Fortunately it was as sunny and clear as the previous days as we set off to go see the icefjord, a little ways out of town past a suburb of dogs, howling, crying like babies. 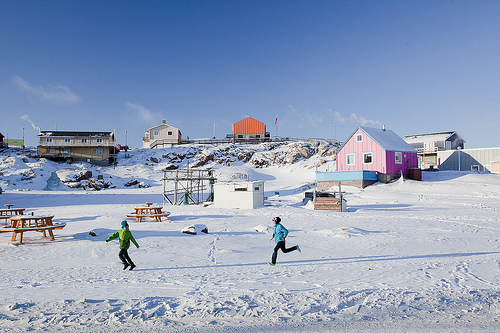 This is what we are doing here

Past the dogs, we followed a single wooden sidewalk in the snow, hoping we were going the right way until the view of a massive iceberg in the distance provided confirmation. We made our way up to a lookout spot where we found two lone benches. We sat and stared and took photos. Every now and then a few boats cut across the ice, dwarfed by the titanic icebergs. Pairs of ravens flew by. It was silent.

It was almost too silent to believe that the Sermeq Kujalleq glacier empties into this fjord at a rate of 30-40 metres/day, making it one of the fastest moving glaciers on Earth, where many glaciers flow the same amount over an entire year.

From there David recommended that we hike back to town along the fjord-edge. Fortunately we could follow the marks of a single hiker’s footsteps, deep holes in the snow, up a mountain until yellow painted cairns eventually appeared. The entire time we spent out there, five hours or so, we met one old Greenlandic man and another Greenlandic couple hiking past us on the same trail.

We took a cab to Arctic Hotel for our last dinner, a fancy Greenlandic buffet—with local musk ox, halibut, reindeer, whale, lamb, and more. There we found 50 tall Danes who Ole had told us were in town for a dental conference. We spoke to a couple that said most of them had gone dogsledding and sailing, which explained how the few available tours could be fully booked and also left us feeling pretty content with our alternative adventure. 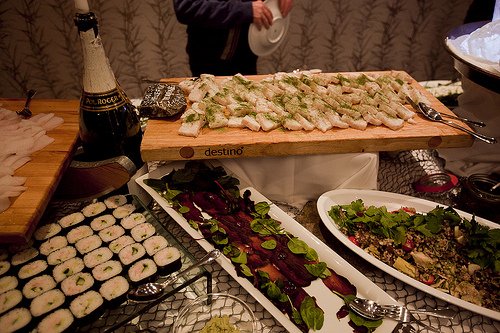 Flights to Ilulissat provided by Air Iceland. Book flight at www.airiceland.is or call +354-5703000