An Unbelievable Weekend Of Mayhem

Eistnaflug, “flight of the testes,” is sacred ground for the rockers and metalheads of Iceland. Featuring sets from 70 bands over three days, 700 kilometres out of Reykjavík, it is a great place to relax or rock out to your favourite kind of music. Whether you’ve branded every inch of your flesh with infernal symbols to the dark gods of metal, or just like the sound of Skálmöld on the radio, you should go to Eistnaflug. Having just concluded my first visit, I can attest this wholeheartedly.

The chance to have Iceland’s greatest heavy bands obliterate your eardrums with pure metal murder should be reason enough to go, as should the excuse of camping out with your best mates for a weekend, but there is more to the festival than that. The fact of the matter is that it is the best possible location for any music festival in Iceland. 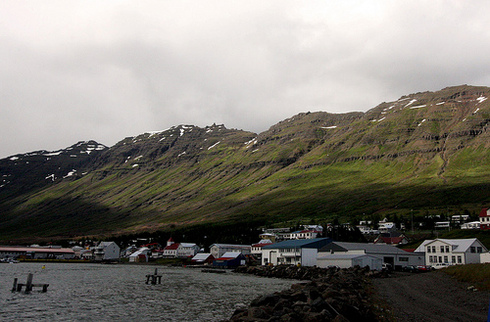 Neskaupstaður is the easternmost settlement of the country, and is flanked by majestic and colourful mountains. On the Thursday afternoon of my arrival, the mountainside facing the town across the narrow gulf has erupted into a full bloom of deep greens, browns and reds, momentarily paralysing all onlookers with its magnificence. My host for the weekend, Ína Gísladóttir, tells me people usually immediately notice how colourful the Eastfjords are compared to the rest of Iceland. Ína describes how the shrubbery, grass and lava all react differently to the summer sunlight in the East of Iceland, creating unique breath-taking sights with deep contrasts and a rich colour palette.

This in turn also describes Eistnaflug very well. Out in the Eastfjords, the bands are both presented with the dreamlike natural scenery, and have nothing but the very best and most devoted fans. Even mediocre bands become legends of rock and roll on stage, as the enthusiastic crowd eats up everything they have to offer. Never before have I seen so many heathens pump their fists to songs about bearing heavy crosses. Likewise, nowhere else can you see good and proper bands receive so much deserved praise.

Eistnaflug has been held annually on the second week of July since 2005. What started as a one-day metal festival now engulfs Thursday, Friday and Saturday and features various off-venue action and activities. Tradition is being built right before our eyes! 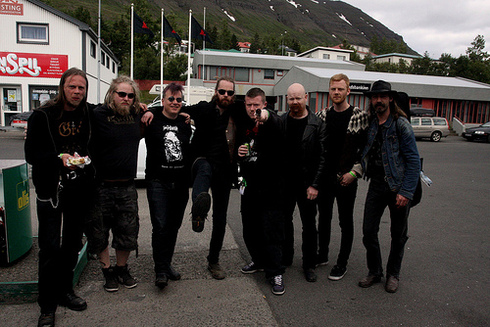 In The Company Of Friends

Another cool aspect of Eistnaflug is the friendly vibe it offers. Make no mistake, this is not on par with the sometimes-violent drunkfests that take place in Iceland during summer (most notably on Merchants’ Weekend), but a place to enjoy music, good company and plenty of booze. On the few occasions when a fight looks to be about to break out, I see concerned people leap into action and defuse the situation. “Not at Eistnaflug,” one such hero says as he steps between two people on Saturday evening. 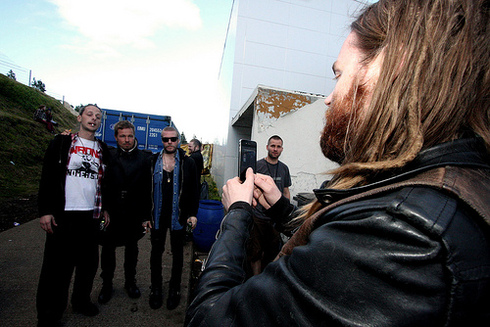 And if there is a VIP area, the bands aren’t hanging there. It’s as easy as pie approaching them outside the venue and striking up a friendly conversation. Humbly I see them accept shots and shake hands with ecstatic fans, sharing a fag and talking about what bands they look forward to seeing.

Speaking to a handful of musicians, I ask what they think of the festival, and what could be improved. Each band assures me that this is the very best festival to play at, with no improvements necessary. They only get paid in beer and petrol money, but they all love coming here. 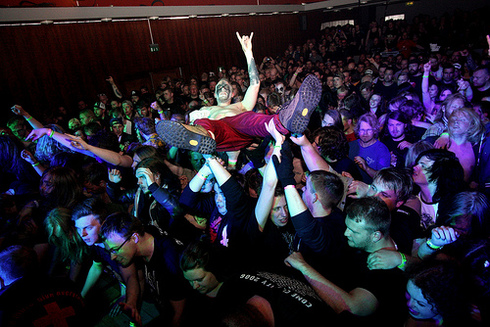 The only concern that the bands hint at is the fear of the festival becoming much bigger than it already is. Becoming mainstream may offer more commercial rewards, but at the moment the size suits the fans, venue sizes and bands just perfectly.

So far, so good, but what were the bands like?

A Brief Timeline Of The Festival 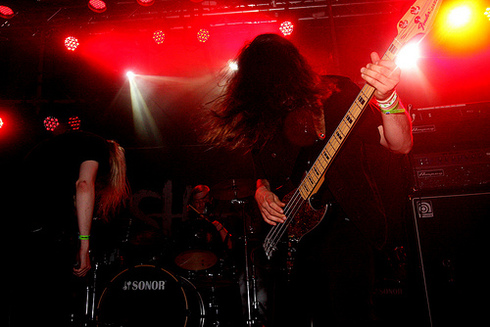 Thursday saw the festival kick off. The courtyard outside Egilsbúð was filled with young people sharing drinks, laughs and smokes, and the stage was packed with extremely enthusiastic fans. Each of the bands were greeted by screams and yells from the fresh crowd, a sea of skull-themed half sleeve tattoos and the ever present display of devil horns. When Plastic Gods take over from Dimma’s so-so set, they really get the crowd riled up. Diving head first into guttural screams and guitar wankery, they understand what the crowd is really after. The real party doesn’t begin until Friday, though.

The Faroese Earth Divide get the crowd headbanging early in the day, and then Ojba Rasta blow the audience away. Here I was, worried people wouldn’t dig it, but they dance and get down to the funky beat more than the reggae crowd at Faktorý. Singers Teitur and Arnljótur comment afterwards that the crowd was very open minded, and that they’d clearly have to return next year.

Following the reggae party, Angist gets the crowd erupting into a massive mosh pit, and Agent Fresco fills the venue to the point where movement becomes all but impossible. 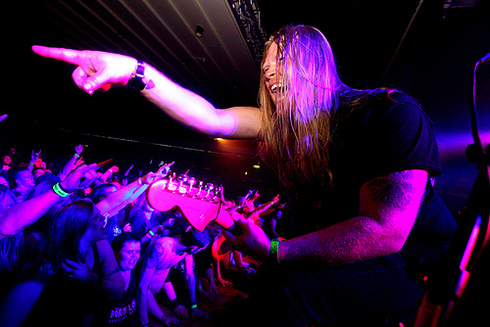 Fighting my way to the front, The Psyche Project continues building the crowd’s steam, and Skálmöld then provide the explosive finish that everyone was hoping for. I’m surprised I’m not coughing blood, given how torn my throat is from all the screaming, and I can hear the same raspy voices all around me.

The party continues outside and at the campsite with people singing and carousing into the wee hours. In fact, the following day I run into Einar Eldur from Potentiam, wandering sunburnt after skipping sleep in lieu of more drink. 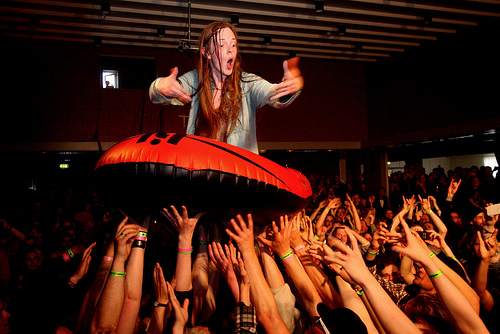 Come Saturday, the crowd is dishevelled and on its very last legs after a lot of hard partying. It’s not until post-hardcore band Endless Dark take stage around seven o’clock that people get back into gear. When youthful trio Vintage Caravan start playing, they draw a large crowd with their loud guitar solos. Not content to let a topless nipple pierced girl be the most memorable crowd surfer, singer Óskar Logi is carried on an inflatable boat all over the floor during their last song.

Singapore Sling play to a very thinned out audience, with a few cool instrumental solos, but it is Muck who melt everyone’s face off. A mosh pit vortex engulfs Egilsbúð and a corpsepainted rock and roll clown laughing is the last thing I hear before my eardrums explode from joy. The floor gets slick from spilled beer, and the set is motherfucking murder! 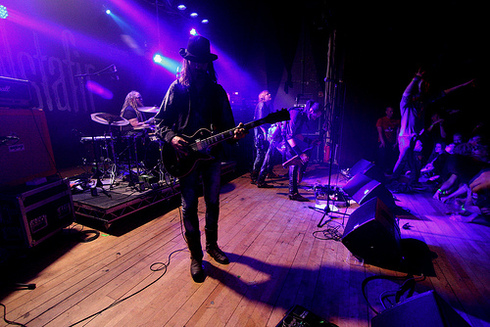 American band Red Fang keep the fans happy, and play an explosive show that leaves a lot of necks sore. Sólstafir then bring their A-game, with their own brand of heathen rock. I lose count of how often the singer thrusts his crotch in my face, but at the end of their hour long set, a fellow front-rower offers that “they play better than they fuck.”

Brain Police unleash pure rock and roll fury on the audience, playing many of their older hits. A red haired girl gets elbowed and bleeds profusely from the mouth, but laughs it off saying, “it’s only rock and roll.” At the end of their set, my chest is a collection of sweat, scratches, beer, and other people’s hairs, and my vocal box is shredded from three days of guttural screaming.

End of the line

The party continues with DJ Töfri playing a rock-heavy playlist meant to inspire dance, but few truly commit to it. Outside, people huddle up against walls, nurse their final few beers and try to catch their bearings. A handful of guys burn the last of their midnight oil, manning up for a naked dip in the sea, but mostly everyone just chills and enjoys the sights.

The police inform me that there have been no assaults or rapes reported at the end of Sunday, and that the only arrests have been drug related. People wave in a friendly manner at the police cars as they drive past before summoning the strength to crawl back to their tents. 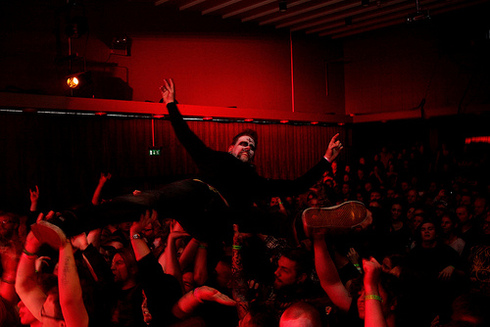 One skill that many Eistnaflug festivalgoers did not seem to have was the ability to crowd surf properly. Thankfully, we at the Grapevine are happy to offer you our pearls of wisdom!

1. Respect the band! They are in the middle of their set and don’t need your drunken ass messing with them, their instruments, or asking for a hug.

2. Don’t dilly-dally! The fans paid to see the band, not your slick dance moves. Once on stage, aim to get the fuck off it ASAP!

3. Glide into the surf! Make sure you have a controlled descent onto the crowd. Jumping in is a good way to fall through! Make eye contact, see hands raise towards you, and then glide!

4. Secure your belongings, unless you feel like donating your glasses and phone to others.

Speaking to Jón Björn Hákonarson, chair of the town council, he says the town has really embraced the festival. “Stefán, the organiser of the festival, makes sure people don’t get up to any trouble. Eistnaflug is a great promotion for Neskaupstaður, and creates a lot of value for the food and hospitality sectors. The town has a long musical history, one that Eistnaflug compliments well. The town takes a couple of days to recover afterwards, but the camping sites and venues are all cleaned up quickly. There is significantly less of a mess here than we hear from other festivals, and violence and sexual assault incidents are unheard of. It just goes to show that they don’t necessarily go hand in hand with music festivals.”