Rauðasandur (English: “red sand”) is a small festival in a relatively remote part of the Westfjords, offering a daytime programme of wholesome fun stuff like seaside yoga, hill walking and a sandcastle contest, followed by a party, a schedule of live music, and a bonfire for the finale. But even with a well-picked line-up that includes local heroes like Nolo, Samaris, Borko and Prins Póló, at Rauðasandur the location is the real star of the show.

The beach itself is about as far west as it is possible to get in Europe, nestled in a deep coastal valley accessible only by dirt road. After coming off highway 62, the track ascends steeply into the mountains, offering a widescreen view over the glittering fjords behind. But the big reveal comes around a final blind corner, when a wide plain of glittering shallows and vivid red ochre sand sweeps into view, framed by the graceful mountains of the Westfjords. It would be easy to think this place was a mirage, such is the startling contrast to the mossy volcanic land that makes up much of Iceland’s countryside.

After descending a gravel track scraped into the sheer scree cliff, new arrivals are waved past by festival helpers onto the grassy campsite field. Most choose to pitch their tents just feet from the sand, taking in some opening night open-mic performances in the nearby barn, before hopping over a fence for a nighttime walk. A line of wheeling, dancing silhouettes punctuate the sand for a kilometre between the campsite and the surf, dotting the shining expanse under a luminous pink sky—the spectacle is not unlike Iceland’s very own miniature Burning Man.

But the weather doesn’t hold. I wake up at 6am to find the Grapevine’s trusty festival tent collapsed, both poles having been snapped like twigs in the gales. Outside, other sleepy campers hastily attach guy ropes, stamp loose pegs into the soil, or just try to sleep amidst the rising noise.

Blown away
After an uneasy night spent dozing in the passenger seat of the car, the morning offers no respite. In fact, the wind worsens throughout the morning with tent-tearing, car-rattling gusts, to the point where the glum organisers call in the emergency services for a risk assessment. Things are not looking good. The campsite slowly empties, and a couple of hours of solid downpour later word filters through that the festival has been cancelled in its original form, with an invitation to regroup in the nearby town of Patreksfjörður.

As we take the mountain track once again, I look down to see the white festival bus far below laden with staff, bands and equipment, crawling sadly away from the beach. 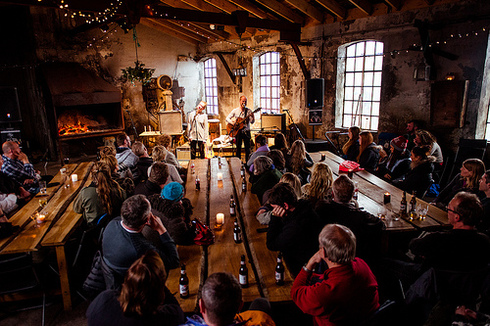 Yo ho Nolo
But a bunch of hardy Icelanders aren’t going to let a bit of blowy weather get in the way of a party. It turns out that our meeting point is Sjóræningjahúsið, a spacious pirate-themed cafe-bar, and before long, the festival crew are setting up the PA system once again.  Festivalgoers get coffee and soup and dry off by the open fire, and the atmosphere starts to buzz with excitement.

It falls on Reykjavík duo Nolo to start the party, and they step up admirably, mixing languid synth pop, soft guitar tones and earworm melodies into a slick, seductive whole. Their sound is more West Coast than Westfjords, bringing to mind bands like Seattle’s Beat Connection and the soft, easy tones of the Cascine label. The addition of a drummer injects a fresh impetus to their endlessly enjoyable set, which flies by way too quickly. For all the casual affectations of their performance, Nolo make purposeful and well-crafted music, and their set is the starting gun for the festival proper.

Borko bring things down a notch with their trademark scholarly melancholia, built from tightly scored guitar work and loose, responsive drums. Blasts of trumpet hint at their big-band intentions, but playing as a trio, the sparser sound serves to focus attention on their songwriting and musicianship. There has always been something listless and plaintive about Borko’s lyrics and minor-key compositions—the optimism of “Born To Be Free” (the title track of their new album) is surely ironic. In the hands of Björn Kristjánsson, life sounds like a long trudge towards its certain end, during which happiness is temporary and hard won.

Prins Póló are on confident form, delivering the most well-received set of the night with a run through their ‘greatest hits’. The word “shabby,” oft-used to describe their sound, is not applicable to this tight and well-practised performance, although their other main descriptor, ‘charming,’ applies more than ever. Prins Póló play with smiles on their faces and an infectious energy that’s transmitted to the teeming crowd, who are whooping and whirling by the time the encore comes.

Since signing to One Little Indian, Samaris are now label-mates of Björk, Ólöf Arnalds and Ásgeir Trausti, thrusting them straight in the pantheon of most-likely-to-succeed Icelandic bands. Pressed for time and harried by technical difficulties, they get to play only two songs here, but their quality is apparent. Jófriður Ákadóttir, also often seen performing as one half of Pascal Pinon, is blossoming into one of the most promising young stars in Icelandic music, delivering a breathy and emotive vocal performance with preternatural, instinctive ease before the three disappear with an apologetic wave. All eyes and ears will be on their next steps. 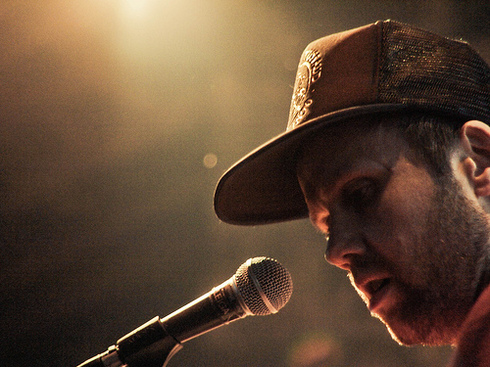 Before long people gather outside and trail up the hill to the local elementary school. It’s a surreal ending, with every classroom and corridor becoming carpeted by sleeping bags, blankets and duvets. People tiptoe between the shelves of chess trophies and national maps, dodging the careworn desks and wall displays about American rappers, trying not to wake those already asleep before settling in some unclaimed corner for the night.

Rauðasandur may have been blown to brink and teetered there precariously for a moment, but the organisers pulled it back admirably. Their labour-of-love event may not have happened on that glorious beach (the organisers go back later to ceremoniously ignite the bonfire themselves) but it was a party to remember.