It’s not often that most Icelanders find themselves in the middle of the desert. Of Monsters and Men’s Nanna Bryndís Hilmarsdóttir isn’t quite sure how to handle it. “It’s horrible,” she says. “We’re all trying to find shade.”
Not that anyone is really in a bad mood. It’s the first day of Coachella, the three-day festival that takes over Indio, California every spring, drawing tens of thousands of concertgoers from around the world. This year is the second time the event has been held over two weekends, with the festival basically repeating itself a week later. Chances are everyone will be a lot more tired by the time it’s all over, but right now it’s just getting started, and spirits are high. Plus, we’re hunkered down in an air-conditioned trailer for the moment, so there’s little to complain about.
“It’s sunny outside and hot, so people must be in a good mood,” drummer Arnar Rósenkranz Hilmarsson says. “I expect the crowd to be very happy—very open, warm, and welcoming.”
OMAM are hot, hot, hot
It’s a good prediction. By the time Of Monsters and Men hit the stage a few hours later, spirits are quite high, indeed. A rapturous crowd welcomes the band to the festival’s Outdoor Stage—the second largest of the six stages simultaneously hosting artists around the site—and proceeds to reinforce the group’s rapidly growing popularity in North America. Many fans sing along word for word to tracks like “Little Talks,” “King and Lionheart,” and “From Finner,” with the lyrical refrain from the latter song ringing especially true in this most un-Icelandic of places: “We are far from home / But we’re so happy.”
It’s actually all a bit surreal for a group that never really had any visions of success outside its home country. “We were just making a record in Iceland. We didn’t think anything was going to happen,” frontman Ragnar Þórhallsson said earlier in the day. Now, not only are they playing for international fans across the globe, but they’re also getting to share the bill with some of their own favourite artists. In fact, their now standard live take on the Yeah Yeah Yeahs “Skeleton” has a special significance today, as Karen O and company will be hitting the main stage themselves in just a few more hours for another one of the weekend’s must-see sets.
Yeah Yeah Yeahs are just one of the acts the band rattles off on a list of artists they’re excited to see, which also includes Blur, Earl Sweatshirt, and Grizzly Bear. And because of the fact that the festival will repeat a week later, anyone they miss this time around can still be caught next time. Although, with more than 100 acts on the bill, it’s still impossible to see everyone, even if you’re there twice. 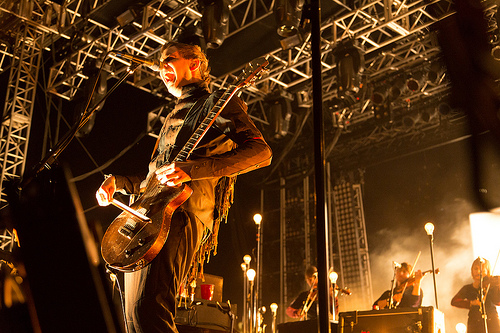 Sigur Rós mesmerise the crowd
Mixing marquee-name headliners with up-and-coming acts, while spanning genres, eras, and nationalities, Coachella is one of the most diverse festivals around. This year’s line-up includes everyone from Wu-Tang Clan and a reunited Stone Roses to indie darlings like Grimes, Alt-J, and Tame Impala. And Of Monsters and Men weren’t the only Icelandic act on the bill; the following night, Sigur Rós took to the very same stage to close out the second day with an epic set that resounded mesmerizingly through the darkened desert.
The temperature drops considerably when the sun goes down in the valley, meaning that by the time the band brought its flickering lights and windswept sounds to the stage, the environment was ideal for a soundtrack of epic stature. Which is exactly what Jónsi and his bandmates (and their numerous additional musicians) unleashed into the night air. Mixing older favourites with the astoundingly intense and uncharacteristically aggressive first salvos from upcoming album ‘Kveikur,’ Sigur Rós not only established their place as a major highlight during a day that also included standout performances from Bat For Lashes, Janelle Monae, and Portugal. The Man, but also boldly declared their musical rebirth to an enchanted fan base clearly ravenous for more. 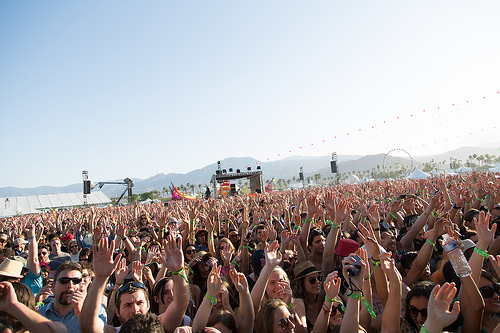 Driven away by a sandstorm
If there was a downside to the first weekend at all, it was the abrupt windstorm that struck late in the evening on the third and final day, kicking up dirt and sand to a degree that saw many concertgoers wrapping scarves around their faces for protection, and others simply giving up and heading for the exits (only to brave even more intense sand assaults in the unpaved parking areas). Of course, by that point, everyone was three-days in, and an early departure didn’t seem like the worst idea. Unless, that is, you really, really wanted to see the Red Hot Chili Peppers.
All in all, it was another success for the team behind the increasingly globally renowned event, and if anyone was breathing a sigh of relief when it was all over, it was only for a moment. In less than a week, it would be time to do it all over again.