On September 29, Kira Kira celebrated the release of her rather splendid “Feathermagnetik” album in Harpa’s Kaldalón recital hall. She was accompanied in her musical meanderings by Skúli Sverrisson on bass, Úlfur Hansson on electronics and guitar, Pétur Hallgrímsson on lap steel and visuals by Sara Gunnarsdóttir.
Now, before we get into this properly, I should start with a disclaimer. A few hours prior to leaving for this concert my stomach decided that, for whatever reason, it was going to throw a hissy fit. So much so, that I considered not going. A combination of having enjoyed “Feathermagnetik” and a sense of responsibility made me leave the house and make my way to Harpa. I did not enjoy the evening as much as I hoped, but that was not really a fault of the entertainment on offer. 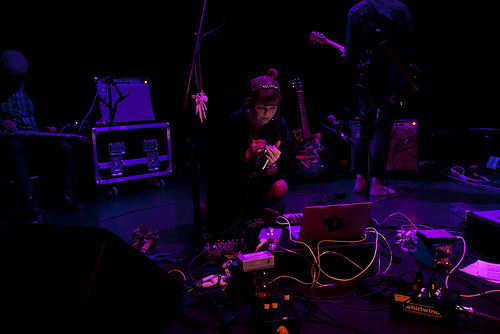 Once inside Kaladón we were greeted by Úlfur, who in addition to playing alongside Kira Kira, was also the opening act this evening. Joined by various wind instruments and a guitarist, together they wound their way through an undulating ambience. The music shifted and swelled as the images on the screen above followed suit. You were never quite sure where the music would shift next, but even so, it remained beautiful and engaging. Nice.
The same could be said for Kira Kira’ performance. And the musical atmosphere was much the same, though rather more herky-jerky than Úlfur’s performance. The whooshing ambience/s slowly formed into clattering rhythmic sections with Kira Kira often standing up to spontaneously dance about, clapping to the rhythm. Behind her, she was halo’d by Sara’s visuals of ‘trippy’ birds folding in on themselves and flitting about the screen.
On one hand it appeared sloppy and under-rehearsed. Undoubtedly it felt ramshackle. It felt as though it was on the border of falling apart, in a similar way to some of the original Post-Punk bands, but much like for those bands, it was part of the charm. Though electronic instruments play a large role in Kira Kira’s live performance, the ramshackle nature of it makes it feel innately human. It wasn’t cool and precise, but instead warm and joyful. More is the pity that the hell my stomach was raising reached its apogee during Kira Kira’s performance; otherwise I think I would have enjoyed it more.
Anyway, I’m all better now. Thanks for asking, Mum.