In the kitchen at Steinsholt, Kari Torkildsen is stirring up a delicious lamb soup. She and her husband, Gunnar Marteinsson, are the owners of Steinsholt Riding Tours. They are making sure everything is ready for the company of thirteen Danes that they are expecting.

Meanwhile, their toddlers, Magnús Örn and Jóhann, play with their matchbox cars on the floor. Not unlike most Icelanders, they don’t seem to need a proper road to drive; in fact their cars hardly need a road at all, leaping enormous gaps straight from floor to kitchen table with ruthless precision. They play utterly oblivious to the poor souls trying to conduct an interview through language barriers, mutton stewing and reckless driving, accelerating, tire squealing and crashing sounds. Boys will be boys.

Kari manages to keep the boys away from the food, a soup made entirely of ingredients from the farm, including the mutton. She prepares this for the tourists who come year round, usually on a quest for the most exquisite of the Icelandic horseback riding experiences.

Under a mystical skyline

Steinsholt Riding Tours is a small family business located in Selfoss region, just over an hour’s drive east of Reykjavík. People from all over the world come here to experience Icelandic horseback riding at the farm, which also offers room and board.

Kari and Gunnar give their guests a true piece of Icelandic tradition, and an experience to remember, with good help from their beloved horses and their incredible surroundings. The scenery is stunning—the singing birds, sleepy dogs and playful horses setting the pace, with the mystical volcano Hekla’s ever-changing presence seemingly hovering out in the distance.

The farm of Steinsholt has been part of this landscape for centuries, rooted in the Middle Ages, when Þorbjörn Laxakarl (“Thor-Bear Man of Salmon”) claimed all land of the Þjórsá valley and Gnúpverja district as his own. Soon after, his brothers-in-law, Ófeigur Grettir (“with-a-frown”) and Þormóður Skapti (“with-a-spear”), arrived in Iceland and he gave them the entire Gnúpverja district. After the adoption of Christianity in Iceland, according to records from the late 12th or early 13th century, a church was built in Steinsholt and the farm remained church property until 1891, housing pastors or their widows. The family who bought Steinsholt from the church still lives there. Steinsholt is now the home of three generations, the current farmers and their children, along with the now-retired last generation of farmers, all in all ten people. Presently, two farms are run on the premises, a cattle farm along with Gunnar and Kari’s horse farm, which provides accommodation to tourists.

While Gunnar has been involved in local politics, among other things, as mayor of the Skeiða- and Gnúphverjahreppur municipality, Kari has slowly but surely built the horse touring and guiding business since 2000. Originally from Norway, with a background in agronomy, Kari moved to Iceland with the dream of working with horses and living on a farm. “It is a peaceful life. You get to be out in nature a lot, and there is always something to do on a farm. You won’t get bored,” Kari reassures us.

The riding and guiding season lasts from around May until September. After that, Kari and Gunnar usually enjoy a well-deserved vacation in October, and then they keep the farm in shape throughout the winter, getting ready for the next season. This means trading horses, feeding sheep, riding horses, feeding chickens, shoeing horses, mending fences, looking for horses, looking at horses, painting barns, removing stable muck, breeding horses, leaning on tractors, chewing on straws, you know, the usual farm stuff. Some say there is no downtime when it comes to managing a farm, and to an urban socialite strung out on lattes, it may very well seem like voluntary Groundhog Day. Then again, the same can be applied to any bustling city-life or suburban commuting reality.

There is no traffic. No fuss. No exposure to brain-drained conversations on the bus, no paying a fee for absolutely everything you want to do—and no people, almost. There is only nature, wind (and weather in general, lots of weather) and animals.

Getting To Know Them

At any given time, Steinholt plays hosts to between 80 and 90 horses. According to Kari, about 50 of those are riding horses. This means that they are carefully trained to handle a variety of variously (un)skilled riders, and carry them on trips along the aforementioned scenic countryside.

“The most important thing is that you can trust the horse. Being a small company we have extensive knowledge of all our horses. We personally choose the horse to suit the skill of each rider here. This ensures a better experience,” says Kari.

If you live at Steinsholt for a while, you can get to know the personality of the horses quite well. They are definitely a cool crew— eating, sleeping standing up and horsing around all the time.

“Horses are somewhat like people. For them to be good riding horses, it’s important that they get the right relationship to humans early on. They are often rebellious until they are about 13–15 years of age. After that, they are usually like “Okay, then. I’ll carry you and behave,” Kari laughs. “So, getting good riding horses is a long process.”

The Smell Of Memories

The horses spend their time outdoors, or in their stable. The stable is a warm, kind of cosy place with lots of hay and a pungent smell (that you’ll eventually grow fond of). Here they eat, sleep, train, scratch each other and neigh impatiently while waiting for their next mission.

“Depending on the wishes of our guests, we accommodate horse trips from one hour up eight days on horseback. In the summers we go on lots of longer rides with groups of up to sixteen persons, away from the farm for days. We ride through the day and stay at huts or mountain cabins for the night,” Kari explains.

On the long trips the horse to human ratio is about three to one. This ensures that every guest has an energetic companion as long as possible, and also that the horses gets their rest.

“It is very important to ensure the welfare of the horses, for their own good, but also for the quality of the experience,” says Kari. 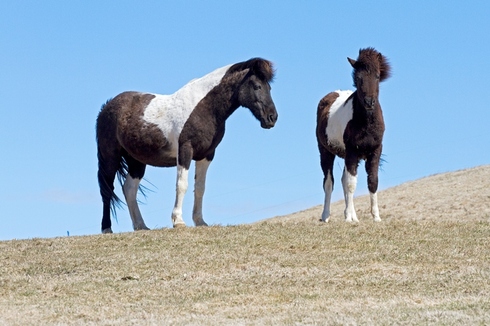 This makes sense. After all, the horses are the ones that make the experience. That’s why Kari and Gunnar make sure their horses get nutritious food, good exercise and proper care. And a fulfilling social life, even! Horses are herd animals, and have a distinct hierarchy within the group. They seem to also form bonds individually, often going in a smaller group and basically just hanging out.

The Icelandic horse is a distinct breed that has evolved due to the isolation on the island. Their ancestors were mainly Nordic races like the Norwegian Nordlandshesten and Fjording races, and also the Shetland pony. They came to be a very strong, hardy and friendly breed. The Icelandic horse is a so-called “five-gaited” breed, known for its sure-footedness and ability to cross rough terrain. As well as the typical gaits (in Iceland known as “fet” (walk), “brokk” (trot) and “stökk” (gallop)), the breed is noted for its ability to perform two additional gaits, namely “tölt” and “skeið” (pace). In tölt, the footfall pattern is the same as the walk, but fast. Tölt is like the cat-burglar-in-a-hurry gait, in the sense that it looks kind of like the horse are very swiftly and stealthily hurrying away from something. At least some people think so (okay, at least one person thinks so: me, the writer of this. Check it out on YouTube. I’m serious!). According to Kari, skilled riders have a good chance of experiencing tölt at Steinsholt. Many of their best horses are experienced tölters, so the possibility is definitely there.

“Our longer staying guests get to experience different horses. Gunnar is an expert in finding a suitable horse and every guest gets a handpicked horse to best suit his or her abilities,” she explains.

Kari believes in the notion of running business in a small scale. At Steinsholt you may experience an intimacy with Icelandic nature as well as culture, in the sense that you visit something closer to that of a farm than that of an institutional tourist facility. What you get here is the real deal, from the mutton to the mountain. On that note, do not for a minute confuse Hekla’s elusive spell with something out of a fairy tale. The 4892 feet high stratovolcano is one of Iceland’s most active volcanoes. Fortunately for the farm of Steinsholt, its proximity is close enough to marvel in the volcanoes powerful presence, but sufficiently distanced to feel at ease even if a major event should occur.

Steinsholt was one of the first companies to start up horse rentals and tours in the proximity of Hekla, and they in turn get customers that want the thrilling sensation of horse riding with a volcanic twist. “Some people come because of Hekla and some people are scared to come because of Hekla. Fortunately, we aren’t too close,” says Kari.

“Nothing ventured, nothing gained,” is written in Njál’s Saga. When the sun appears over horses grazing outside and a delicious scent spread throughout the house from the mutton stew brewing on the stove, what is gained by tourists visiting Steinsholt is obvious.

Speaking of venturing, the boys Jóhann and Magnús Örn are now making their way to play outside, yet more horsing around is to come. But then again, what is life without the shenanigans? Some day all this will be theirs. Not a bad prospect at all.