Where Are The Glowing Rocks?

As you would expect, many visitors to Iceland are more than eager to view the country’s famous volcanoes. They may, however, be surprised to discover little more than rugged, cold lava flows and non-smoking volcanoes. These are of course fine sights, but they’re not the glowing lava and fuming craters that many expect from one of the most active volcanic regions of the world. The explanation is rather simple: One needs to happen upon a live magma-spouting event to see those spectacular sights, and those occur roughly once every three to four years.

Iceland formed gradually over many years after the Mid-Atlantic Ridge became positioned close to, and later over, one of the world’s more powerful mantle magma plumes, one of its so-called hot spots.

Magma production within the plume and rising molten rock beneath the otherwise submarine ridge was sufficient to build up an approximately 40 km thick crustal expanse of basalt covering an area of 200,000 km2. Out of all that, an area of 103,000 km2 rose above sea level to form an island—Iceland. The oldest rocks above sea level, which are found east and west of the presently active volcanic zones, are about 15 million years old.

The plates drift apart approximately 2.5 cm per year, but in reality the spreading is localised and a long time passes between periods of rifting in any particular area. In each rifting episode, the plates “jump” apart in particular regions, with the associated earthquakes and new fracture formation—or movement along existing faults. This happens mostly without any magma surfacing, but from time to time the Earth mends itself and one of the volcanoes blows the lid or a new volcanic fissure opens up.

During the past 1,200 years or so, over 250 eruptions are known to have occurred. In terms of weight, the magma extruded at the surface on land over the past 11,000 years (the Holocene period) totals at about 1,500 billion tonnes. A still larger mass has simultaneously solidified in the crust, beneath the surface, at a considerable depth.

The active volcanic zone covers an area of around 25,000 km2, which equals to about one-fourth of Iceland’s surface. In this zone, volcanoes and volcanic fissures do not appear at random, but are rather confined within elongated areas bounded by fissures, faults and volcanic formations. These areas, called volcanic systems, are typically 5-20 km wide and 20-100 km long.

There are 30 distinct volcanic systems in Iceland. Three are located on the Snæfellsnes Peninsula, four on the Reykjanes Peninsula, six in South Iceland and four in Northeast Iceland. The remaining fourteen dot the Central Highlands.

Most volcanic systems support a centre of volcanic activity, usually either a high composite cone or a large mountain massif with a central area of subsidence (a caldera). Underneath the majority of these centres, commonly referred to as central volcanoes, a magma chamber lurks somewhere in the abysses of the earth.

Although volcanic activity is most frequent at this centre, eruptive fissures also stretch out in opposite directions from the centre and open up from time to time. Large faults or open fissures without any traces of volcanic activity cut through the landscape like multiple steps or gaping cracks. Eruptive fissures are distinguishable by the presence of crater hills or pits aligned in a row, commonly composed of a number of segments. Some are up to 20-30 km long, but they typically measure 0.5 to 5 km in length.

Iceland’s most geologically active areas are rifting zones that stretch roughly from SW to NE across the island. Additionally, there are three lateral eruptive zones on the Snæfellsnes Peninsula in South Iceland between Öræfajökull and Snæfell.

Within the rifting zones, fracture magma fountain eruptions—typical of basaltic sea-floor volcanism—are common, with large, central volcanoes also occurring from time to time. In the lateral volcanic zones, however, eruptions tend to be more explosive in nature, with magma extruding through high volcanoes and fractures (more akin to the activity in continental volcanoes).

Eruptions below the ocean or icecaps are also not uncommon. These lead to ash-producing eruptions and the sub-glacial ones can produce swift melt-water floods, termed ‘jökulhlaups.’

So, what is there to say about the active volcanoes? If you’ve timed your visit right and a volcano happens to be erupting, you can probably go check it out. However, do be careful and follow the rules and directives set by ‘Almannavarnir’ (“Icelandic Civil Protection System,” www. almannavarnir.is). If no volcanoes are erupting, there’s still plenty to see. 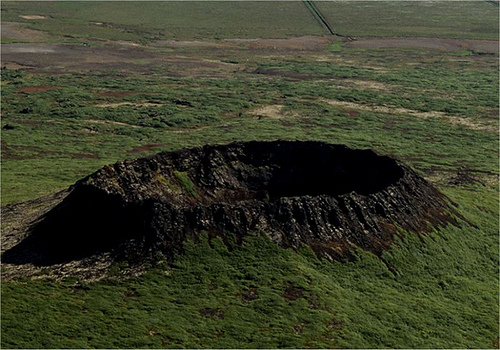 Halfway between Reykjavík and Stykkishólmur in the west is a great hike to the rim of Eldborg (“Fire City”). Although it’s not quite a proper mountain at 112 metres above sea level, Eldborg is still well worth a visit. It is a circular crater formed out of dark and reddish basalt lava spatter and some scoria that looks like a circular wall surrounding a deep pit. From afar, it really looks like an exceptionally well-formed volcanic crater. It is 5-8,000 years old, the product of a vigorous but short-lived lava eruption on a short fissure.

The hike starts not far from a farm called Snorrastaðir in Hnappadalur valley, off Snæfellsnesvegur (Road 54). On the road connecting Snorrastaðir to the main road, cross a bridge over the small river Kaldá. Head more or less straight for the crater, through birch shrubs and willows or moss and grass-covered lava. The scoria base of Eldborg and its high lava wall are cut by the trail, so the route up there is easily discernible.

While hikers can walk up to an observation platform, they can’t can’t and should refrain from trying to walk along the rim. The crater is about 200 metres wide and 50 metres deep. After marvelling at the surroundings, head back the way you came from. Note: Eldborg is protected by law as a natural monument—do not walk off the path or leave anything behind.

The hike should take about two hours total.

The distance covered is about six kilometres. 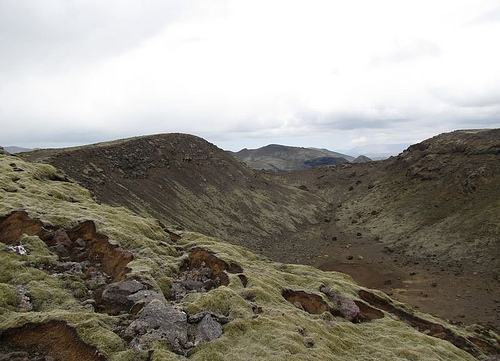 
An unobtrusive mountain south of the Hellishei›i Geothermal Power Plant, Stóri-Meitill (514 metres above sea level), doesn’t appear to hold much appeal for the hiker at first glance. Looks can, however, be deceiving. Hiking to the summit not only provides a great view over south Iceland—including Hekla, Eyjafjallajökull and Vestmannaeyjar—but it also reveals a large, deep volcanic crater. The eruption that created Stóri-Meitill (“The Large Chisel”) likely occurred under a rather thin glacier on a short fissure, blowing ash and pumice (tephra) into the air. Meanwhile, less active craters formed the hills to the southwest of Stóri-Meitill.

From Road 1, take ﬁrengslavegur (Road 39), a low pass between the bulky mountain Lambafell and the cone-shaped Stakihnúkur. It branches off from Road 1 at an area of lava field called Svínahraunsbruni, which dates to the year 1000. You may find a suitable parking place at the intersection between ﬁrengslavegur and a short road leading to a mine.
Cross the main road and a small lava field in the direction of Stakihnúkur. Climb the screes of the peak directly to the top (15-20 min.). Descend a bit and start turning to your right, across grassy and mossy hillocks and gravel flats towards the north-western shoulder of Stóri-Meitill.

Pass the highest cliffs on your right and hike upslope along the southwest (right) side of the tuff rocks. The slope is steep and a low-angled, and the rocky section at the top requires some very light scrambling. Pass the cairn at the flat top to marvel at the big volcanic crater. The best descent route follows the SW-ridge of Stóri-Meitill for about a kilometre. Head down and walk back towards the NW shoulder. From there, head for Stakihnúkur again but instead of climbing it, hike down the small valley at its southern side and back to your vehicle.

The ascent should take about 1.5–2 hours.

The length of the hike is about 5 kilometres.


Correction: An earlier version of this story incorrectly reported that hikers could walk along the rim of the crater, which has been closed off for foot traffic for a number of years now.