The Art Of Encountering Higher Beings 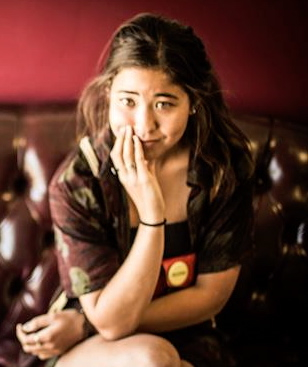 Sure the winter-wonderland scene of an alien polar bear crushing a weak and flailing naked woman was eye-catching, but what really got my attention on the All Tomorrow’s Parties Iceland advertisement was a single line of type that read “Thee Oh Sees.” A band that I had been following since high school up and down their native California had followed me (so I liked to think) across the Atlantic and over to quaint little Iceland. What were they doing here? In that moment my attitude toward the poster changed. It littered the shop-windows, spare posts, and bus stops around Reykjavík for weeks, and I had walked by without a second glance. But now I couldn’t stop seeing it. I had to be there. I had to see Thee Oh Sees perform in an aircraft hangar at an abandoned US Navy Base in Keflavík, naturally.

Like a phantom
On Friday, June 28 I eagerly exited the Reykjavík Excursions festival bus and was hit with a wave of excitement and a chilling gust of wind. I quickly sought shelter inside the hangar and commenced the half-dancing half-mingling routine of mid-day at a music festival. It hadn’t been ten minutes when one of the journalists I came along with turned to me, “Jim Jarmusch has been spotted,” she relayed from a friend. I looked up and caught his bright white flash of hair gliding through the crowd toward the door.
Instinctively I followed him out and caught his attention in front of the brick red hangar walls. I held out a star-struck and shaking hand and introduced myself, and asked if I could take his photo. He looked as if he was going to turn me down, but instead just blinked and asked, “Why?” Why? Did he want me to unload onto him the massive quantity of enjoyment I’ve reaped from his creative mind in my short twenty-one years of living? Or was it a legal precaution? Did my twenty-year-old Minolta really look so invasive? I hadn’t expected that. And surprise on top of star-struckedness does not make a good conversationalist. I finally answered, “Ummm…for my own, personal enjoyment?” which I later confirmed with other interns is yes, very creepy. Luckily my throat was so dry it came out as a near whisper. “Yeah, sure” he said, throwing his elbows out and striking a pose. Click. “Oh, you’re shooting film?” he noticed, “very cool.” Check. I had my proof. I skipped back to the comfortable smiles of fellow Grapeviners. Ten minutes in and I had gotten a picture and a “very cool” from Jim Jarmusch.
Birds of a feather…
Before I even had a chance to exhale, I turned and saw that Jarmusch had walked in behind me, and was now having a chat with John Dwyer, the lead singer of Thee Oh Sees, a mere twenty yards away. I’m pretty sure in that moment I melted, but my comrades assure me that at least to the outside eye I remained in solid form. Still buzzing off of my first celebrity encounter of the night, I waited for the two men to part ways and then made a beeline for John. Still star-struck, still shaking, “Hey, I’m Parker. Can’t wait to see you perform tonight.” I managed to scrape out of a bone-dry throat. I told Mr. Dwyer that I too was from California and had seen them on many occasions back home. I never considered getting a chance to meet them though, let alone all the way out in Iceland, of all places. “Yeah, it’s a small world huh?” he responded. “I just met Jim Jarmusch over there. He’s got nice lips. Very…chapsticky.” I laughed pathetically and we went our separate ways.
On disappointments and dead house plants
After a couple of acts my nerves finally returned to a more natural state, and I went out to catch some air. Nothing could top the shock of having talked to Jim Jarmusch and John Dwyer within ten minutes of one another, so when I saw John again—this time with Petey, the guitarist, and Brigid, the keyboardist and backup singer—I approached with a little (tiny, minuscule) more cool. I started conversation with a “Yo!” rather than a sweaty outstretched palm this time. Nice.
John and Petey were in conversation so I turned to Brigid and introduced myself. Conversation started politely and I asked about their time in Iceland. They had flown out the night before and were leaving the next morning. There goes my fantasy of taking the band out for a drink back in Reykjavík. No sunset shots at KEX, no turntable heist at Harlem. I asked her if it’s disappointing being here knowing they don’t get to stay and take it in a little longer. “You never know what a place is going to be like, so sometimes we get somewhere and then realize it would be nice to stay a bit longer” she answered, “but it’s nice to spend time at home, especially because it’s so rare now. I leave for these long periods of time and get back, and all my plants are dying.” Fair enough. Iceland’s cool, but no one likes dead house plants.
The crowd is beginning to filter in through the opening in the chain link fence, and things start feeling a little more like a festival and less like a backyard barbecue. I’m trying desperately to imagine what it would be like to be on a stage in front of so many pairs of eyes and ears.
“What goes on with you guys leading up to a show?” I ask her.
“You mean like a ritual? I don’t know. We don’t have like a ritual or anything. We just show up on time, make sure everything works.”
“Well, what about the crowd? Do you like to feel it out beforehand or is that any factor going into a performance?”
“No, not really. Some of our best performances have been when the crowd isn’t really into it, you know not dancing or anything. Maybe it’s because we start to try a little harder. Or maybe it’s because it’s more like a practice so it’s more like jamming.”
“And by ‘best performances’ you mean…”
“I mean like some nights we are just really on, and the music sounds great, and other nights things just don’t line up as well. I don’t know, I think tonight will be fun.””Well, I’m really looking forward to it,” I assure her.
She smiles. I can’t tell if her nonchalance is characteristic or if I’m boring her to death with my predictable fan questions. She excuses herself to go find a restroom. Great, I’ve bored her to the bathroom.

On Finnish DJs and The Fall
I’m not quite ready to let go though, and luckily a fellow intern has picked up conversation with Petey. An easy in. We chat with him about Finnish DJs and the sad state of Reykjavík’s music venues. With the announcement of Faktorý’s closure there is a general feel of impending doom surrounding the topic, but Petey exhibits less concern than others. “I guess that’s life,” he says, too cheerfully. Petey’s cheerfulness is very consistent, a broad smile permeates his stories of Finnish DJs, of men in Chewbacca shirts, and of the strange state of Keflavík.
John walks back from a short hiatus, fresh beer in hand. “Man, those Fall guys are grumpy,” he remarks. It’s easy to tell why. When The Fall goes on later that day, Mark E. Smith stumbles around the stage, banging on the keyboard, strumming the bass, and knocking on the drums at his will. That is, when he’s not ducking behind a large stage speaker so that no one in the crowd can see him double checking his own lyrics on a crumpled piece of paper. “It’s probably from suffering years of abuse,” Dwyer concludes.
From inside of the hangar, Icelandic band múm starts their set, and we decide they are a worthy note to wrap up conversation on. We head inside toward the warm, fake-fog spewing stage and John and Petey head backstage.
I am elated. I am in a triumphant daze for the rest of the night; right up until the 4:00 in the morning bus spits me out back onto the cool and familiar Reykjavík concrete. I talked to Thee Oh Sees, as if they were humans. As if they were made of the same flesh and blood substance and spoke the same language as me, and it worked.


Grapevine Loves ATP! If you do too, check out our Friday Coverage and Saturday Coverage of the Festival.
—
Bus trip to ATP festival provided by Reykjavík Excursions