Musicians and fans convened in Keflavík over the weekend for Iceland’s inaugural edition of the All Tomorrow’s Parties festival. If you didn’t make it, here’s some of what you missed. 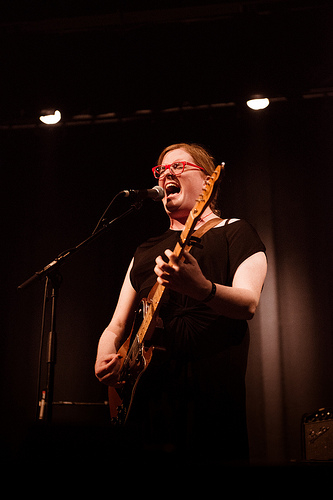 – Alison MacNeil, kicking off her shoes during Kimono’s performance. Gylfi saying, “Sorry, we went to the Sigur Rós PR School, so we don’t know what to say.” Alison adding, “Yeah, we’re JUST like Sigur Rós.” A fan shouting, “Except more beautiful!”
– Tilda Swinton playing literary bingo with her two children in the Captain’s Lodge. Scoring points for identifying an excerpt of Roald Dahl’s eponymous children’s book, “Matilda.”
– Ingi Þór Ingibergsson, Botnleðja’s self-proclaimed biggest fan, waving a white cable knit sweater over his head during what will possibly be the band’s last performance: “When I heard them, I became fifteen-years-old again.”
– Tense fans finding relief at Mobile Massage’s station in between mosh sessions.
– Einar Örn Benediktsson, from the City of Reykjavík’s Division of Culture and Tourism, scolding Americans for calling toilets “RESTrooms,” during his set with Ghostigital. 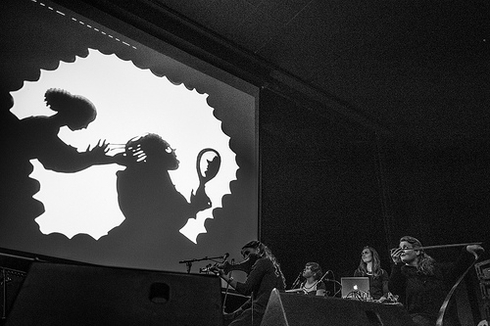 – Amiina providing the sweetly melancholic score for a vintage reel of fairytale animations made with Lotte Reiniger’s delicate paper cutouts.
– Nick Cave falling off the stage while singing lyrics about flying and sticking it out to execute a crowd pleasing encore performance of “Red Right Hand.”
– Halli Valli of Æla ripping off his shirt to reveal a fairy princess dress while he and his elves perform out of a “borrowed” truck in between sets.
– Starstruck fans loosening up with their idols after a few beers.
– Snorri Helgason and Högni Egilsson engaged in an extended embrace after Thurston Moore’s Chelsea Light Moving performance.
– Jón Sæmundur Auðarson painting a canvas during Dead Skeletons’ festival closing set, while burning soon to be confiscated incense.
—
Bus trip to ATP festival provided by Reykjavík Excursions