I came away from ATP Iceland with a programme, a chopped wristband, unused bus tickets, a pop quiz sheet, an incomplete bingo card, a copy of Ace Frehly’s ‘No Regrets,’ and a photograph with Tilda Swinton. For the first time ever, I was leaving a festival with more possessions and dignity than I arrived with.
A sunny day in Njarðvík
My day started by attempting to get to Ásbrú in time for the Fan vs. Band football match, but ended up missing it by a hair. It seems like everyone else did too though – not a single person I bumped into had been there. Now I’ll never know if Thurston Moore scores offside.
The next plan was to catch ‘My Neighbour Totoro’ at Andrew’s Theatre, a movie specially curated by my new BFF Tilda Swinton, but for some reason it was rescheduled. Instead they were showing one of her selections from the previous day, ‘Our Man Flint,’ a James Bond from the ‘60s parody starring James Coburn that most likely served as Austin Powers inspiration. Now I want to see the first 90 minutes.
My cohorts and I decided to catch the next movie as well, another Swinton-pick, the 1940s comedy ‘To Be Or Not To Be,’ where Carole Lombard and Jack Benny escape WWII Poland by outwitting a bunch of dumb Nazis. So many hijinks and misunderstandings! Out in the lobby after the film, we ran into Grapevine intern Parker and Projekta management maven John ‘Brainlove’ Rogers, and instantly formed a team for Dr. Gunni’s Pop Quiz at the Officer’s Club. We didn’t win, scoring 21/30, but we got some real obscure ones right and had many laughs.
After the quiz, John informed us that there was a convenience shop on the former NATO base that sold various snack items and possibly big cups of coffee. Unfortunately, there was a 15-minute wait while they brewed a new pot and I wanted to see SQÜRL, so we hauled ass back to Atlantic Studios.
I marched into the old airplane hangar and played a round of my own ATP game: Spot Jim Jarmusch. His iconic white mop-top had been floating around the crowd all of Friday, like the snowpeak on Audience Mountain, but now he was right up onstage. He and his band looked like three black shadows in the shifting purple and orange floodlights. It was visually impressive but musically speaking, well, let’s just say Jim should stick to making movies. Seriously though, the Jesus & Mary Chain called and they want their demos back. 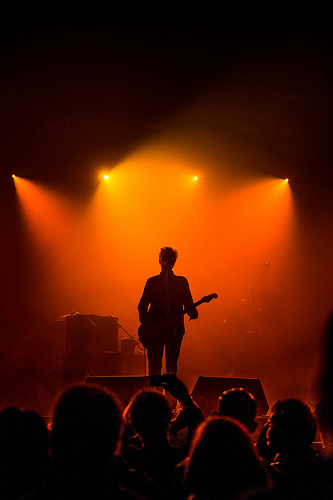 I can feel my head is burning!
There was the longest set-break of the entire festival before the next act. A solid 45-minutes of hanging out in the concrete yard built up massive anticipation for the moment of truth: Mr. Nick Cave’s momentous return to Iceland. Right as the set began, Cavemania took hold and it became difficult to distinguish the chaotic beauty of the music from the cheering of the crowd.
Quickly into the second song, “Jubilee Street,” I noticed a commotion happening down at the far right side of the stage. It was only later that I found out from ATP organiser Tommi Young that Nick had fallen off a ramp he’d had built from the stage to the audience. Luckily, things went on as normal, with the smouldering king of sleaze flirting with a woman in the audience (if she claims virgin-birth by him in nine months, I’d believe her), and busting moves throughout the show.
Seeing Nick Cave play live was such a huge Finally! moment for me, an overgrown Goth who obsessed over him from the moment I heard my first Birthday Party song, “Deep In The Woods.” What’s more, this show so wildly exceeded my expectations, pushing my heart up into my throat every few moments. My floodgates broke during the set’s last song, but then, despite the pain in his ass, he came back to do “Red Right Hand” as an encore! That guy is a fucking pro, and I need to watch Scream again. Oh, and literally half the crowd left right after his show. 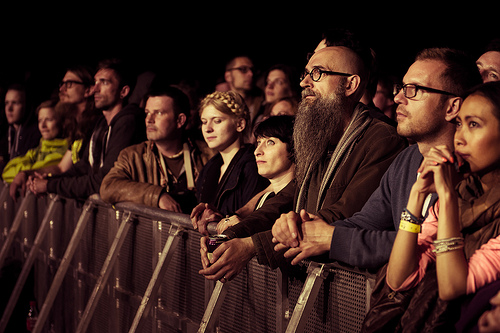 Coming down and bailing out
After all that stimulation, I had to calm down by sitting in Andrew’s Theatre for 20 minutes listening to the DVD menu loop of the film ‘I Know Where I’m Going,’ then grabbing a big coffee from the convenience store and splitting a bag of salt & vinegar chips with my man and my best friend (actual, not Tilda Swinton). We got back to Atlantic in time to watch Deerhoof be adorable, looking like they drank a case of the Rhinoceros energy drink my best friend had just bought.
I crashed pretty hard right after their set and spent the time until Chelsea Light Moving just lying somewhere. I had spent the whole festival sober, but things were starting to get fuzzy. Thurston Moore’s latest band was way more punk than I realised, and I really liked their sour demeanours paired with upbeat tunes. Their tribute to Pussy Riot, “Lip,” is still stuck in my head.
I saw what Æla was getting at when I walked out of the hangar, but if there’s one thing I know about that band is that I can’t handle them sober. (When I’m drunk I basically try to climb onstage with them though. Totally different story.) I lay around somewhere until Dead Skeletons, which I’d been told was really something to see.
Fit for one who sits and cries
After an intriguing prelude of guided meditation script and dim visuals, the musicians signalled to the sound-tech to crank their instruments way up and launched into a set of garbled songs, like off-cuts from one of Singapore Sling’s lesser albums. I feel like I’ve seen and heard Henrik Björnsson do the same thing over and over again, and it didn’t gain anything from some Hot Topic t-shirt-looking graphics on a tiny screen and masses of burning incense. I could still smell peoples’ drunk-farts.
On the drive home, the colours of the moss, the clouds and the rising sun were more brilliant and dreamlike than I had ever seen. Random patches of mist appeared and dissipated around our car, and the clouds clung to the tops of the mountains. The memories of the weekend and the views ahead reminded me to always keep on pushing the sky away.
See also: Oh Say Can Oh Sees – All Tomorrow’s Parties Iceland: Friday
—
Bus trip to ATP festival provided by Reykjavík Excursions