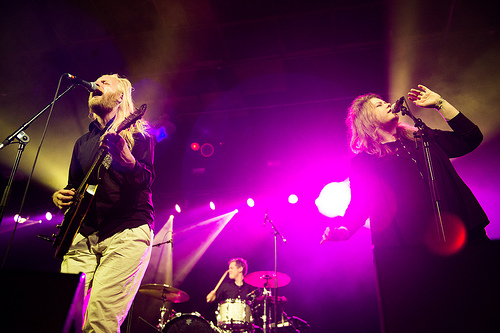 A deal with the wrong deity
Nick Cave must have made a deal with the wrong deity, because God only knows how Mark E. Smith of The Fall was able to stay upright the whole set while Cave took a tumble. The Fall were as usual, Mark E. Smith—a roaring, drunken, toothless lion—and whatever group of patient session musicians he was able to fool into the role of babysitter. The first two songs consisted of Mark repeating the words “We are-eugh The Fall-eugh” in lieu of the lyrics he had lost along with his mind. The band was able to jostle him back into gear by playing Strychnine by The Sonics, but it was a brief respite from what must have been the most chaotic Fall gig I’ve seen yet (and that’s saying something). Mark was present for about 60% of the set and conscious for 0% of it. While present, he spent his energies twiddling with the amps and smashing his hand on the keyboard while the band struggled to keep Uncle Dissonance Madfuck from gnawing their faces off. 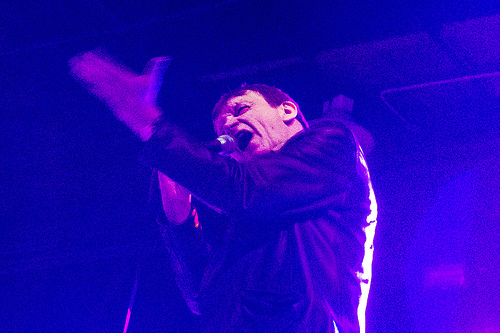 The recently reformed Botnleðja were a rare treat for the Icelanders and a puzzling addition for the foreigners. Essentially a pop-punk band with some grunge and indie elements—not quite lowbrow enough to be Slayer and not quite highbrow enough to be Deerhoof. But for those of us who grew up listening to them…we couldn’t have been happier. A tight, loud set of sing-along punk that hadn’t aged a day since I saw them win the Icelandic Battle of the Bands in 1995. The only point I saw people really dance during the Friday line-up—unless you count Tilda Swinton at the Apparat gig. A flawless gig except for the circle-jerk in the last song, where a group of former collaborators were brought on stage to sing as a men’s choir for one of their new songs. Aside from feeling forced and sentimental, the new song sounded like some pub rock football chant and left me slightly annoyed. 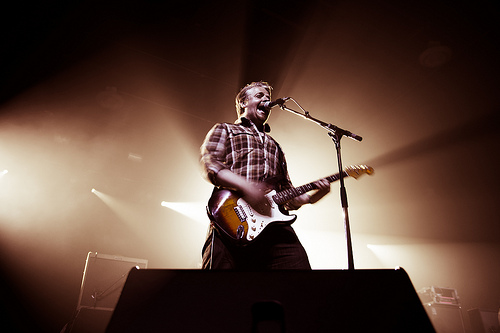 The band I had been waiting for
Now it was time for the band I had been waiting for, Thee Oh Sees. ATP organizer, Barry Hogan’s, favourite live band currently active. I caught Thee Oh Sees playing at the Mercury Lounge in New York in 2009, urged to go by my friend Luigi. Back then, I came in not expecting much based on what I had streamed online and left with a pile of merch and a blown mind. For ATP Iceland, the singer was wearing his usual nevernude shorts and Alex James’s hair, the bassist in classic old school skinhead gear—both peeking at the crowd, chin-straddling their instruments. I don’t care how good the Nick Cave set is supposed to have been—this was as good as it gets for me. Psychedelic garage rock in all its glory—twitchy, taut, weird, violent, raw and repetitive.
My group and I did a brief 15 minute jog over to the Officer’s Club to catch some DJs but found out that that part of the schedule had been cancelled so we jogged right back to catch Ghostigital .
Ghostigital should be familiar territory to fans of The Fall. A non-stop stream-of-consciousness rant delivered by a domineering “vocal artist” over looping noise and raw beats. The only real difference being that Ghostigital is coming out of the electronic end of the spectrum. A fun gig but hardly exceptional by Ghostigital standards, and after ten solid hours of drunken nostalgia I was about ready to cradle my cheeseburger like a sad indie wreck at the back of the bus. I did. And it was glorious. 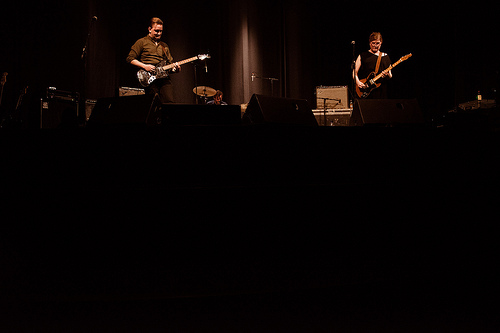