The Mess Is Back!

Reykjavík Music Mess is a DIY music festival held annually in a couple of the city’s downtown venues. The festival started in 2011 and has consistently brought together the finest acts on the Reykjavík scene for a series of almighty parties, topped off with sets by overseas visitors like Deerhunter (USA), Jarse (FI), Fossils (DK) and Laura J Martin (UK). This weekend (May 24–26), Reykjavík Music Mess takes over Volta and KEX with a choice menu of live music including sets by DZ Deathrays, Bloodgroup, Oyama, Mammút and Muck, as well as an exhibition of adapted band portraits and a daytime off-venue programme. With the third festival bearing down fast, we caught up with two of the acts playing—homegrown electro stars Sykur and Anglo-Australian experimenters PVT—to find out what they have in store for us. 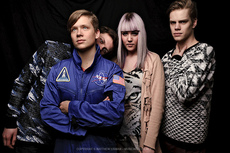 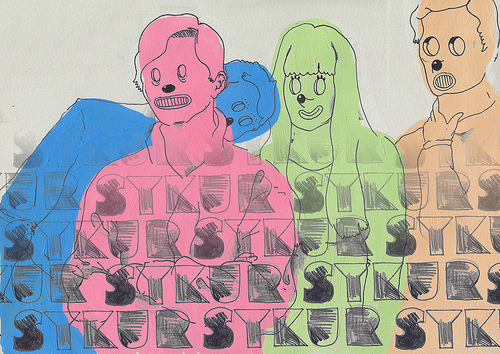 Sykur by Guðný Hrönn Antonsdóttir
Guðný Hrönn graduated from the Iceland Academy of the Arts in 2011 and went on to study photography and fashion, which are her main areas of interest. Fashion photography is usually the biggest influence in her artwork, but not so with her illustration of electro-pop group Sykur. “When I saw the picture of them I wanted to do something different,” she says. “Recently I have been finding myself drawing weird, defaced Mickey Mouse characters, so I decided to use that as inspiration. The background had to be colourful, of course, because they are a colourful band.”
Hello Sykur. Could you introduce yourselves and tell us how you met?
Hi Grapevine! We are Sykur! We are (in alphabetical order) Agnes, Halldór, Kristján and Stefán. Halldór and Stefán started making electro while playing together in a marching band and somehow Agnes and Kristján got entangled along the way. We all live on the same street and we have pancakes together on Sunday mornings.
Tell us about your sound and setup. What are the sounds you’re attracted to, and what’s the aesthetic?
Our music is mostly synth-driven and we have a geeky fascination for all things analogue. That being said, we have been incorporating more and more other instruments as well, guitar and vibes, for example. When we play live, you can expect to see three smartly clad lads stroking their music-making machines (does that sound dirty?) and a girl with copious amounts of stage presence making up for the geekiness of the former.
Do you see yourselves as a pop band, or a dance music act, or is it something you never think of?
This is not something that we think about a lot. We just make the music that we want to make and leave it up to others to interpret the results. When we’re working in the studio we think of ourselves as producers, but when we play live we want people to forget about these labels and just have fun, regardless of musical taste.
Do you see yourselves as part of an Icelandic scene, or an international electro scene, or both?
The Icelandic scene is fundamentally different from the international scene. Here, all the bands are good friends and help each other out; there’s very little competition. This is something we feel is largely missing from the international scene. When we’re playing abroad we see ourselves as a part of the international scene, but we still try to bring with us some of the good nature of the Icelandic scene.
Are you aware of the visiting bands, PVT, DZ Deathrays and Withered Hand? What do you think?
We listened, we like.
Any Icelandic acts playing at Reykjavík Music Mess that you’re looking forward to, or anything brand new that you’d recommend?
Oyama are an amazing new act; their EP is fantastic. We’re looking forward to hearing Mammút’s new stuff; it’s going to be great if their new single is any indication. Bloodgroup just released a great new record and their stage performance is fantastic. 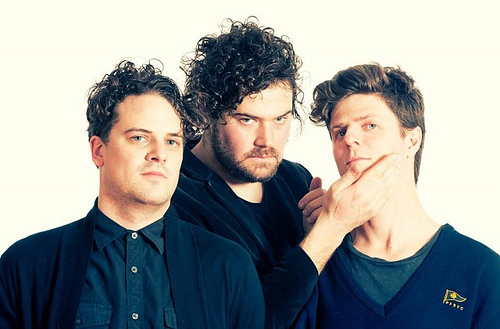 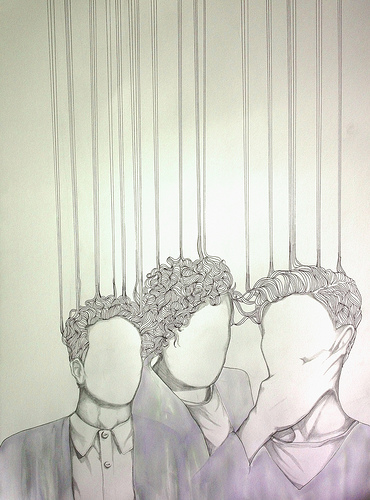 PVT by Julia Mai Linnéa Maria
Julia Mai is a freelance illustrator from Sweden who has lived in Iceland for the past seven years and has no intentions of leaving. This autodidact skipped art school altogether, opting instead to hone her craft independently. Her illustration of Australian band PVT came from free-flow simplicity. “I can’t really put my finger on what I was thinking,” she says. “The drawing just appeared on the paper while I was listening to their music. They’re really interesting and dreamy so I guess I wanted to connect their music to something visual.”
Hey PVT, nice to virtually meet you. Could you introduce yrselves please and tell us how your AUS/UK long-distance-relationship came about?
Three Australians, one of which currently lives in London, two of which have British passports, one of which used to live in London, two of which are brothers.
Tell us about ‘Homosapien’—was it a long time in the making? How did the writing, recording, release go?
We made it over the course of about nine months, with most of the recording being done over a month in an old haunted mansion in the Australian countryside. It was mixed by Ben Hillier in London and was released on a few different labels across the world, but mainly a new one from Brooklyn called Felte.
Are you excited to take it on the road? Have you any European gigs lined up that you’re are especially excited about?
We’ve been playing it for a while now, but it’s good to play it to people who have finally heard it. We’ve done an Australian tour and are in the middle of a European one now.
You’re playing the Reykjavík Music Mess. Have you been to Iceland before, and if not, what’s your impression of the place?
I’ve only stopped by in the airport, but it’s always been on my to-do list, so I’m glad we’re getting the opportunity to do so. I’m expecting to see a country like no other.
Iceland has a famously prolific music scene. Is there a buzz about Icelandic music in Australia do you think?
If a new group from Iceland puts a record out, they generally get a bit more attention than if they’d come from other countries, yeah. Iceland is a long, long way away from Australia in many ways.
Have you any Icelandic favourites?
Björk of course. We also played some shows with Sigur Rós a few years ago too.
You’re playing with some of the best new bands on the scene, have you had a chance to check out the RMM line-up?
I know our buds DZ Deathrays are playing, which is always fun.
Are you planning on any trips out into the countryside while you’re here, or is there anything you’d like to check out?
Yes! But need to do more research….
What should people expect from your set?
Energy. Emotion. Electronics.